Temple Run is an insanely popular iPhone game with an insanely simple premise: like Indiana Jones from the first scene of Raiders of the Lost Ark, you play the part of an adventurer who “takes the idol” from the eponymous temple, then runs for his/her life escaping deadly booby traps and obstacles. 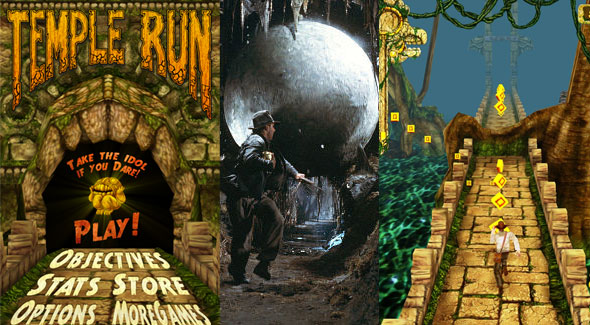 From there, the game departs from Raiders. Instead of being chased by a massive boulder, the hero is chased by evil monkeys. In addition to trying to survive as long as possible, the hero also collects gold coins during the temple run. The pace and difficulty of the game gradually increases; inevitably, the hero will die, but your gold continues to amass through successive fatal runs. (The app is a free download from the App Store if you want to experience all if this for yourself.)

Although the premise is simple, the implications are anything but. Who built this temple? Who is our hero, and what’s motivating him?

Who built this temple?

The average game player’s response would probably be something along the lines of, “MayIncAztec…um, somewhere in South America. Wherever Indiana Jones tried to take the idol and was chased by the naked guys with the spears.” Let’s be a little more specific. The artwork in the game is of course meant to appeal to our vague understanding of pre-Columbian civilizations of South (and North) America, but which one(s)?

First, let’s examine some of the key images from the game. This idol appears on the title screen and persists in the lower right hand corner of the screen during gameplay:

This face-like carving appears throughout the temple as an ornament to various boobytraps: 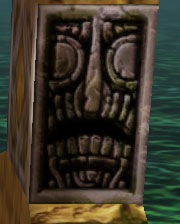 Both examples feature exaggerated, almost skull-like teeth. All indicators point to the Aztec influence in these designs. Skull-like imagery was prevalent in Aztec art at the time of the Spanish conquest. There’s also this example of this Aztec idol which, after a variety of Google image searches for things like “Mayan idol” and “Incan idol,” was the only result that featured teeth so prominently: 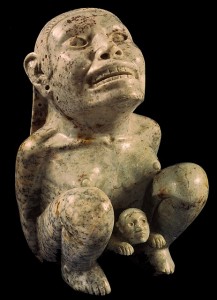 As for this beak-like image, which persists in the top-left corner of the screen during gameplay: 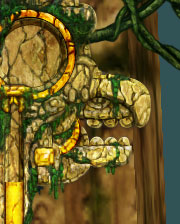 Again, the best match I could find among Pre-Columbian civilizations comes from the Aztecs, who frequently used serpents in their religious imagery: 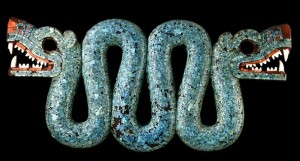 It’s worth noting that the temple and idol in Raiders of the Lost Ark were supposedly products of the Chapoya civilization, which was conquered by the Inca prior to the Spanish conquest of what is now Peru. 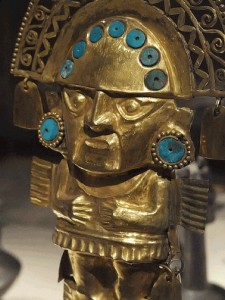 Inca art may seem superficially similar to that of the Aztecs, but it’s quite distinct, which should be no surprise, given that the two civilizations were separated by 1,000 miles of not-easily-traversable terrain. But thanks to Raiders and Temple Run, we see how easily the Aztec and the Inca (and pretty much all Pre-Columbian cultures south of the Rio Grande) can exist within the same cultural space for Americans. Which is no big surprise; we don’t think about these cultures very often outside of history classes, and when we do, they’re almost always in the context of the Spanish conquest of the New World.

Which is basically a story of white people stealing gold from Indians. 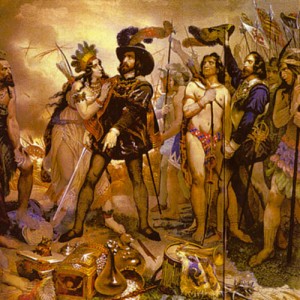 Which is basically the story of the temple scene from  Raiders. 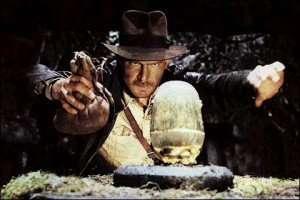 Which is basically the story of Temple Run. 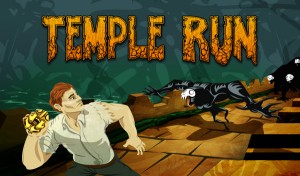 Who is our hero, and what motivates him?

Look at that pasty white guy. He’s the default character in Temple Run, and as you guide him through repeated temple runs to  collect more gold from the (Aztec) temple, you earn the ability to unlock additional characters:

Including the default character, the majority (4/7) are white. And one of them is an honest-to-Dios conquistador! White people ruin EVERYTHING!

Admittedly, that’s a highly reductive racial reading of this cast of characters (and, you know, the history of Western Civilization), but you can’t deny the fact that all of them are outsiders. None of them are Aztecs. They’re all foreign invaders of another culture’s sacred space, and they’re shamelessly taking a sacred (gold) object from that space. What’s worse, they’re not satisfied by the idol that they just took. Apparently, they want to rob the Aztecs of all of their wealth, so they amass gold coins while running away from their hungry pursuers.

By “they,” though, I really mean “you,” as in, the game player. You press the screen to deliberately take the idol. You tilt the phone back and forth to deliberately capture gold coins. And though each run ends in death, you, not the character, get to keep all of the coins. In other words, Temple Run allows you to act out your imperialist fantasy of stealing wealth from and exerting dominance over an exotic foreign civilization.

This is nothing to be ashamed of. It’s a common fantasy to have, as attested to by millions of sales of the conquest strategy game Civilization. Anyone who’s played this game and claims to have never cackled with maniacal glee after ruthlessly conquering and looting a rival nation is either lying to you or is really bad at Civilization. 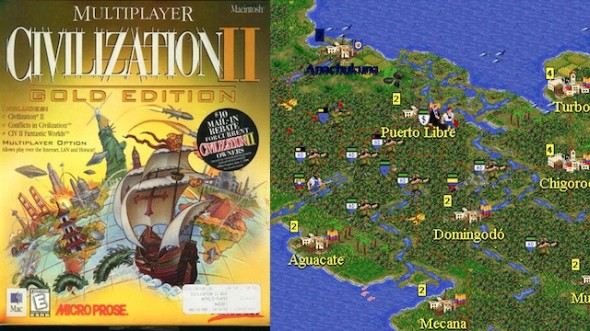 Now, time to qualify all this talk of imperialist fantasies. It’s important to note that Raiders, Temple Run, and Civilization all offer a highly sanitized imperial conquest fantasy. In Raiders, Indy doesn’t have to slaughter scores of natives to steal the idol; he only sees them after he leaves the temple, and he narrowly escapes death at their hands. In Temple Run, the Aztec temple builders are nowhere to be found. And in Civilization, combat and conquest are abstracted and sanitized to the point that war is more like chess than it is, well, this:

Nobody would want to play a Spanish Conquest video game in which huge numbers of kills come from smallpox as opposed to awesome headshots.

I’m not saying you should feel guilty for playing Temple Run or participating in imperialist fantasy entertainment. Or that you are somehow being insensitive to the plight of indigenous peoples of Meso-America by collecting all of their abstract virtual coins. I am, however, saying you should be aware of the politics of empire and cultural dominance in pop culture, even in a simple iPhone game with no ostensible plot, so that you remain aware of them when presented with less innocuous displays of imperial politics in pop culture: