This Sunday, Jean Dujardin won the Best Actor Oscar for the role of Georg Valentin in The Artist, playing a charismatic silent movie actor incapable of coping with the world of sound. Intellectually motivated movies about movies tend to punch above their weight in critical circles, and The Artist found its moment, rising from nearly out-of-competition at Cannes, without a distributor, to the darling of the Academy Awards.

Seven years ago, Dujardin starred in a different sort of movie, Brice de Nice (marketed in English as The Brice Man), based on a character he performed on television with the French sketch comedy group Nous C Nous. Brice is a surfer who lives on the southern coast of France, on the Mediterranean Sea. This is hilarious for two reasons that don’t translate: the American name “Brice” ends in a sound funny to French ears that does not rhyme with “Nice,” and the Mediterranean’s tame lapping against her shores hardly beckons to surfers.

Brice’s trademark bit, other parodying the Ocean Pacific / Quicksilver type, was “Cassé” (roughly translated as “breakage”), where he would issue silly insults or putdowns while sweeping his arm in a trademark chopping gesture.

The feature film forced the character out of the structure that supported him in sketches with predictably awkward results (similar to The Ladies Man or Ali G Indahouse), but it relied heavily on one of Brice’s strangest characteristics – he practices “Bodhism,” the religious worship of Patrick Swayze’s character, Bodhi, from Point Break.

These two roles (along with his starring turn in the successful French adaptation of the Quebecois hit relationship comedy Un gars, un fille), are a big part of why Jean Dujardin is popular in France. And he is popular: “Le Casse De Brice,” a song recorded by Dujardin for the 2005 film, was a top 5 single in both France and Belgium.

While there is something passingly novel about such a broadly farcical actor winning Best Actor, the real points of interest here are the unifying qualities of craft that bring together these roles and make up Dujardin’s performance style — the connections between Hollywood meta-historiography and Point Break gags. In The Artist, Dujardin does three things at once:

This is the same craft he employs in Brice de Nice and OSS 117 — manifesting a character that lives in himself, but is also about another, precursor character.

This notion of character fits into theories of performance and literature in a variety of places. There is a structure to it, where characters are expressed through multiple parallel functions, one of which is always the character commenting on itself. There is a disunity to it, where the signifier and the signified never quite connect, and the genre being imitated is deconstructed. There is an anxiety of influence to it, where movies seem ever tasked with surpassing themselves, but find any originality they have in the aggressive misreading of the precursor. There is even an Oedipal element to it, where the parody character seeks to metaphorically kill and supplant his father through satire, but can never quite achieve its primary object of desire because of a quality of the psyche.

But whatever system you ascribe to it in criticism, consider the technique of creating these characters, and the tools used to make them. Jean Dujardin has several physical traits that differentiate him from other actors, especially Hollywood leading men:

He shares these traits with the legendary parodist Leslie Nielsen (although Nielsen traded being a bit thickset for being perennially 60 years old), as well as many great parodists, character actors and clowns for the last few hundreds of years. 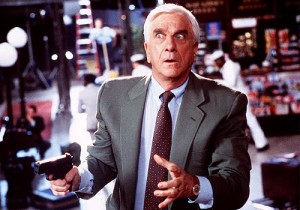 Notice the eyebrow makeup and shoulder pads, accentuating the traits of a conventional TV/movie cop and also accentuating differences.

These tools Dujardin, and really any effective parodist, uses in acting create a character in parts — a familiar gesture, a remembered facial expression, a way of standing, an attitude, a reminiscent catchphrase — such that the synthesis of the parts approaches the imitated character, while at the same time the differences between the parodist and the precursor are brought into sharp contrast.

For example, Dujardin as Brice tends to hold out his jutting chin in a forced and feigning way. Patrick Swayze in Point Break juts his chin dramatically at certain points, but always in a the preternaturally relaxed, self-assured way that was uniquely and forever Swayze’s. Here Brice is showing his lack of confidence and self-possession, which in turn comments on the adolescent mentality of surfer wannabes, the arrested adolescence of aging surfer wannabes, and the difference between how the faces of real people tend to look and the faces of archetypical Hollywood surfers.

Dujardin as Brice also wears too-tight T-shirts and uncomfortably rubs his stomach whenever he has the opportunity, which is a metacharacter commentary on how improbably lean the surfer character is, relative to an actual grown man, and the futile irony of Brice aspiring to him.

Dujardin uses both of these gestures in connection to Brice’s masculinity, which creates a commentary on boy vs. man or ideal vs. reality and the problematic developmental arc represented by somebody who aspires in life to be young Patrick Swayze. The fact that Brice gets away with it and is generally likable and popular with the ladies is a further commentary on the relationship between reality and archetype in social interaction.

While doing this, Dujardin has a finely developed intuitive sense for his physical and attitudinal eccentricities — he has to understand the things that make him different from the thing he is imitating. He knows what he is symbolizing.

What’s in a face

He also has to make a complex expression of character intuitive and easy to watch. This is where the large face comes in — from infancy, humans find it easier and less straining to read faces with large features. Learning how to read faces is a very important part in our cognitive development, and we read faces in parts, looking for eyes, noses and mouths. The bigger and more pronounced they are, the easier it is to put together the face, and the more cognitive bandwidth remains for complex symbolism to happen without mental fatigue.

That is, faces with big features get across emotions easier and more clearly, which is useful if you are trying to do a lot of other stuff at the same time. For example, compare classic/current Bugs Bunny to old Bugs Bunny: 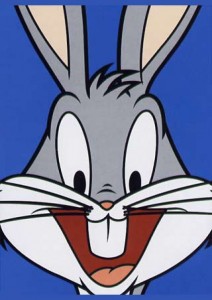 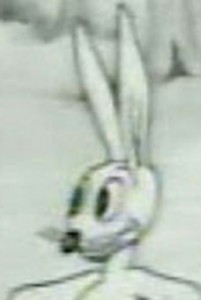 Hello, doctor. Has anything happened to you lately?

Bugs’s features have gradually grown until they are too large to fit inside of his head. His smile is now about three times as wide as his skull. This is because the larger features are easier for children to connect with and are more expressive with less work.

What is lost is subtlety, balance and proportion, which are not that important if you are not primarily concerned with being beautiful or realistic. Even then, many Hollywood stars have large facial features, but Dujardin not only has them, he accentuates and draws them out through his technique — and through costuming and makeup — to make them appear even larger. 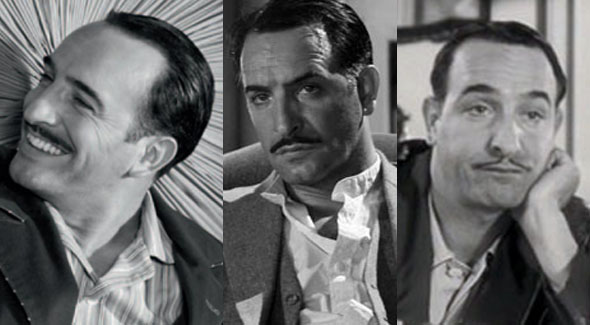 They are also not that important if you don’t have speech at your disposal and have to rely entirely on your face and body for expression, as silent movie stars did.

Perhaps the function of this imitation in The Artist is showing the differences between Dujardin’s portrayal as Valentin and the expectations we’d have for a more conventional movie star of the present day. Rather than drawing out and satirizing the precursor from the standpoint of the present, Dujardin is looking backward, making a precursor of the present and commenting on what present movie stars are like by comparing them to a remanifestation of the past.

I am not certain, and I am not about to head into a full interpretation of The Artist now. I’ll merely point out some of the tools at the artist’s discretion, and will leave the rest to you in the comments.