Dozens of Chinese stowaways are discovered in a container ship in California; Toby looks to pick a fight over school prayer with a recess appointment; Thanksgiving at the White House sees C.J. in charge of turkeys and Charlie looking for the ultimate carving knife. (c/o IMDb)

TV episodes connected to major holidays always need a special tolerance for sappiness. And when it’s The West Wing, which tends to be sappy even under the best of circumstances, we really have to lower the bar. But when the “Previously on …” montage consists entirely of scenes where the characters introduce themselves and their job titles, you know not to expect much. That’s the producers’ way of saying this episode is so trivial that it requires no prior context. 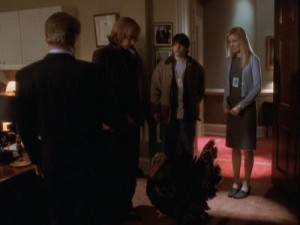 There are two big conflicts within the episode: the nomination of Leo’s sister Josie as an Assistant Secretary of Education and the sudden arrival of the Chinese refugees. Josie is nominated for one of the most harmless sounding positions in the history of bureaucracy, but the Republicans are willing to fight her nomination tooth and nail over the subject of school prayer. Toby’s willing to go to the mat defending her in order to pick a fight over school prayer. And Leo, normally the practical one, has to throw her under the bus because she violated one of his principles: “we do not strut, ever.” Every gesture is rife with meaning, which would be easier to stomach if the gestures weren’t so petty and procedural.

The Chinese refugees are a weightier matter. Shipping them back to China will likely result in their incarceration or death. However, keeping them in the States requires some tricky navigation of precedent, especially with relations with China as tense as they are. When the Chinese claim to be fleeing religious persecution, Bartlet has one of them flown to the White House to verify if his faith is sincere. I don’t know why this is Bartlet’s job, given that the Scrooby Separatists fled a country where the head of state was also the head of the church, a flight that Americans commemorate with an annual day of Thanksgiving, which Bartlet proclaims in this very episode. Couldn’t Jhin Wei meet with one of those humorless reverends that Josh and Sam met with earlier in the episode?

Jhin Wei proves his faith to Bartlet by quoting St. Paul: “For we hold that man is justified by faith alone.” This is an odd shibboleth, especially when directed at Bartlet. Bartlet is a devout Catholic, as evidenced by his passion for Notre Dame, in which he enrolled with the intent of becoming a priest (as established in “The Portland Trip”). Even if you’re fuzzy on the details, you might recall that the Catholics and certain other sects had a bit of a falling out over whether faith alone (sola fide) or faith plus good works would save a man’s soul. The Catholic Church took the position, hammered out in the Council of Trent (1545-63), that faith was necessary but not sufficient for salvation. This announcement led to a bit of a scrap in Europe. 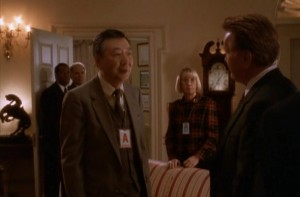 For Bartlet to nod and glow when Jhin Wei attests that “faith is the true shibboleth” is, at best, a remarkably relaxed view of the catechism. We’ve seen that Bartlet is not a totally doctrinaire Catholic, as evinced by his dressing down of Dr. Jenna in “The Midterms” on the subject of gay marriage. But the prohibition against gay marriage is one line of Leviticus, a body of Mosaic law that no Catholics practice in their entirety. The idea that faith plus good works equals salvation is not an escapable tenet. It’s pretty much the core belief of the Roman Catholic faith. You can’t just say you believe; you have to demonstrate that belief through a Christly life and through following certain sacraments.

But these aren’t Bartlet’s Catholic beliefs that are set on the scale here. They’re Sorkin’s beliefs. For Sorkin, remember, ideology is necessary. It’s having an ideology that separates you from the cynical games-players (pure process) and hucksters (pure image). Obviously, being able to count noses and trade votes makes it easier for you to pursue your ideology, and being able to sell your ideology to the public will keep you in power longer. But Sorkin has a soft spot for those who believe, even if they lack the power to make their beliefs into law. For Sorkin, sola fide: faith alone is enough.

There’s also a thing with turkeys and Paul Revere’s knife; the less said of those the better. 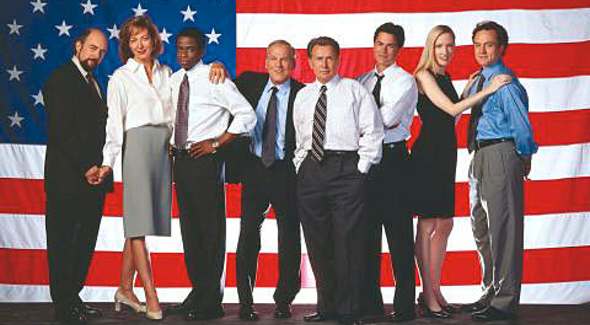