In the 40 Inspirational Speeches montage, those speeches weren’t actually the climaxes of their films. They were what got the characters fired up to take on the opposing army/rival team/preppy frat house. But in a romantic comedy, the big speech is the main event. You have two people who clearly love each other (that much was obvious from the poster). But for some reason, one of them is taking that job in Hong Kong and/or getting back together with Chad (curse you, preppy frat house!). There’s only one thing to do: run across town, show up panting in the nick of time, and pour your heart out. I find it comforting that even in this age of 3D CGI madness, the denouement of a romantic comedy is almost always a big block of dialogue.

You might even say that these climactic speeches are the whole point of a romantic comedy. We want to see someone bridge that gap between “it will never work” and “happily ever after,” armed only with the power of words. And the way you cross that chasm is by not caring if you fall. You have to lose your cool, drop your guard, and swing for the fences. It’s interesting that there’s often an element of public humiliation to these declarations. In Keeping the Faith, Ben Stiller has to woo Jenna Elfman via speakerphone, with her whole office listening. In Hitch, Will Smith stops Eva Mendes from leaving town by jumping in front of her car. In Made of Honor, Patrick Dempsey actually interrupts the girl’s wedding to another man, and does his whole “I’ve loved you forever” monologue right there in the church (he is eventually punched). In Jerry Maguire, Tom Cruise arrives home to find his living room full of strange women, but he barely hesitates. “If this is where it has to happen,” he says, “then this is where it has to happen.” And that is exactly the point. These men don’t give speeches like this because it comes naturally to them. They do it because love has left them no other choice.

These people are not just expressing love, they are putting themselves at risk. And it’s that combination of what they say and what it took to say it that lifts us up where we belong.

THE RULES: Characters must be speaking directly to their beloved (no talking to a third party), no actor can speak more than once (but some people did appear more than once), no TV shows (even though Spike had an amazing speech in the finale of Buffy).

NUMBER OF CLIPS I STARTED WITH: 285

CATEGORIES I ORGANIZED THEM INTO: Basic I Love You, Compliments, How I Feel, Forever, Random

CLIP MY GIRLFRIEND REALLY WANTED ME TO INCLUDE THAT I HAD TO CUT: Singles. “You… belong… with… ME!”

CLIP I REALLY WANTED TO INCLUDE THAT I HAD TO CUT: Conan the Barbarian. “If I were dead and you were still fighting for life, I’d come back from the darkness, back from the pit of hell to fight at your side.” 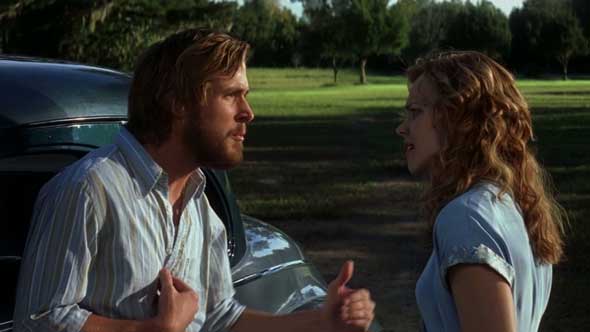 UPDATE, 11/13, 12 pm: After I pushed this live, someone pointed out a neat coincidence. The two final clips are the big Titanic kiss, followed by Sam, the little blond kid from Love Actually. This totally didn’t occur to me, but Sam is a huge romantic movie buff. At one point in Love Actually he actually watches and acts out that very scene from Titanic. Things like that happen when you edit.

And thank you Pasteur for reminding me that Patrick Dempsey and Patrick Duffy are two different people.

48 Comments on “How Hollywood Says “I Love You””