30 Rock’s recent Season 6 premiere reminded me of one of the unresolved mysteries of Season 5: 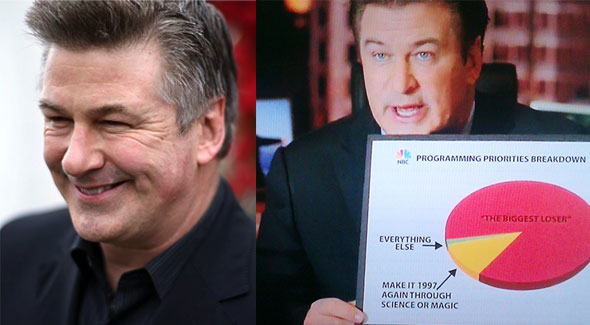 Does Alec Baldwin exist in the 30 Rock universe? As in, the actor, separate and apart from the character Jack Donaghy?

Read on for arguments both for and against this, and vote at the end of the article!

First, a quick recap: at the end of Season 5 of 30 Rock, Jack’s wife is kidnapped in North Korea. Since this was prior to Kim Jong-Il’s passing, this allowed for a few hilarious Margaret Cho performances of the Dear Leader as the self-aggrandizing moviemaker-cum-dictator. The episode gives us two clips of the movies he made with Tracy Jordan. The first an untitled spy-action thriller: 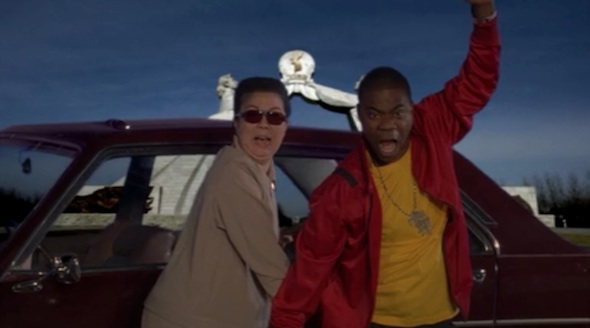 It’s hilarious in its own right, but the second one is even better: Kim Jong-Il’s version of Glenngary Glen Ross: 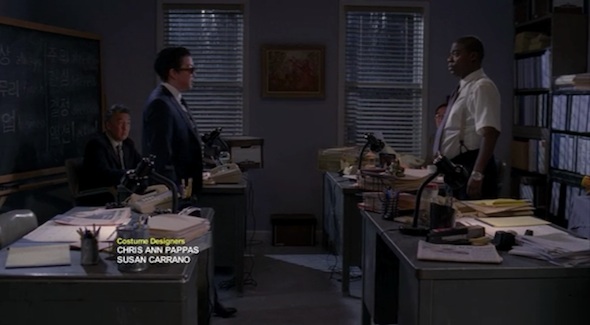 "Put that coffee down! Coffee for closer only!"

(Note: YouTube clips of these scenes are unavailable, but the entire episode is available on Netflix Instant Streaming.)

Yes, that’s Kim Jong-Il in Alec Baldwin’s famous role from the movie. Alec Baldwin, as in, the actor who plays Jack Donaghy on 30 Rock. The movie Glenngary Glen Ross clearly exists in the 30 Rock universe. But does that necessarily mean that Alec Baldwin does too? 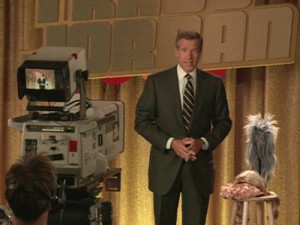 Before we answer that question, let’s consider how 30 Rock handles awareness of real-life pop culture. For the most part, it is highly aware of it. The show-within-the-show The Girlie Show is on real-life network NBC, and NBC personalities like Brian Williams and Jerry Seinfeld have made cameo appearances on 30 Rock as themselves. The dialogue is littered with references to real NBC shows, other networks’ shows, and real movies.

But explicit references to TV shows and movies that feature 30 Rock stars are typically off limits. Instead, references come in the form of thinly-fictionalized versions of the real thing: The Girlie Show stands in for Saturday Night Live, and Tracy Jordan’s movies and antics borrow heavily from Tracy Morgan’s real-life movies and antics. We as the audience can fill in the blanks and make the connections between the fictional version and the real-life version, but we still require that separation in order to maintain the suspension of disbelief required to accept that this fictional slice of NBC can exist in an otherwise real-life media environment.

So given those rules, how do we handle the existence of Glenngary Glen Ross within the 30 Rock universe?

One option would be to discard it entirely. This scene plays during the end credits, which is separated from the rest of the episode by a commercial break. It’s a portion of the episode reserved for throw-away jokes that most people won’t even see because they’ve moved onto something else or the DVR stopped recording. But that wouldn’t be very Overthinking It of us at all to dismiss it outright. So let’s move to the next option: to consider that both this movie and Alec Baldwin exist in the 30 Rock universe. If this is the case, the show has chosen to avoid the Alec Baldwin issue entirely. To my knowledge, outside of the Kim Jong-Il scene, the show has made no explicit references to Alec Baldwin, either through his movies or his real-life persona. This works fine from the point of view of us, the audience, watching a TV show. We don’t have to deal with the jarring collision of a character and the actor that portrays him/her like we did in Oceans 12, in which the characters attempt to pass off Julia Roberts’ character as…Julia Roberts. There’s even a Bruce Willis cameo:

But consider the media-savvy characters of 30 Rock. They’re constantly referencing pop culture and would surely be familiar with Alec Baldwin’s movies and his many memorable roles and lines. They would point out the physical resemblance between Donaghy and Baldwin and the resemblance between Donaghy’s cutthroat business sense and the Glenngary character’s “Third prize is ‘you’re fired'” cutthroat business sense. It would be a constant source of material for Liz in situations when she’s trying to gain the upper hand on Jack.

But they never do these things. So maybe Alec Baldwin doesn’t exist in the 30 Rock universe after all. This is our third option: that an actor other than Alec Baldwin plays the “Coffee is for closers” role in Glenngary Glen Ross. This is a more convenient scenario, and it avoids all of the issues mentioned above. But it brings up its own set of issues. Based on Kim Jong-Il’s affinity for the scene, this mystery actor turned in a memorable performance in Glenngary. Did he go on to do other work? Is he a substitute for Alec Baldwin in his other movies, like The Hunt for Red October and Beetlejuice, or do they not exist at all? What about the other Baldwin brothers? Do they and their movies exist? And what about Team America: World Police? Who is Kim Jong-Il’s #1 actor shill in that movie? 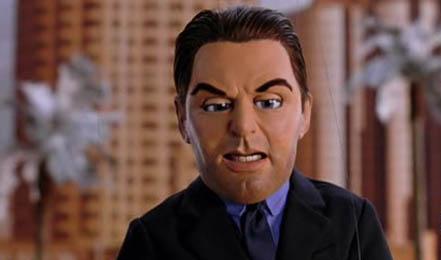 Does it even exist at all? I hate to think of a world in which Toofer, Lutz, and Frank haven’t seen Team America: World Police.

Troubling questions abound in all three options, which is why I’m not settling on any of them and leaving it to you, the readers! Consider the evidence carefully and cast your vote in our poll:

Does Alec Baldwin exist in the "30 Rock" Universe?

Update 2/14/2012: The poll is now closed, and Yes, he exists won first prize, a Cadillac El Dorado, with 46% of the vote. (Important caveat on the “yes” option: many commenters brought up the possibility that Alec Baldwin in this universe doesn’t look like the Alec Baldwin in our universe, or that Jack Donaghy doesn’t actually look like the Alec Baldwin of our universe. Crazy stuff.) No, he doesn’t exist won second prize, a set of steak knives, with 40% of the vote. N/a – not canon won third prize, YOU’RE FIRED, with a measly 14% of the vote. Thanks to everyone who participated! I hope this mystery is resolved before the end of 30 Rock’s run by a cameo appearance of Alec Baldwin, or his alternate universe counterpart…Balec Aldwin?

30 Comments on “Vote: Does Alec Baldwin Exist in the 30 Rock Universe?”