The idea of someone using dreams to affect our waking life is a terrifying thought. We are most vulnerable when we’re sleeping, at risk both from being attacked by other people as well as from nightmares. On the other hand, there are also advantages to our subconscious having the chance to express itself. It allows our dreams to become places stripped of limitations. While the closest we can get to controlling our minds while we dream is through lucid dreaming, two films imagine settings where people can control their dreams to create new worlds.

The first is the recent blockbuster success Inception (2010), directed by Christopher Nolan. In a near future where people can share dreams and impact each other’s thoughts through them, Cobb (Leonardo DiCaprio) is a master extractor. Through dreams, he can both withdraw information from his subjects, as well as insert a thought into their minds – a process called “inception.” Hired to enter the mind of a major CEO’s son and plant the idea to break up his father’s company, Cobb assembles a team of people to help carry out the mission. At the same time, he battles his own demons and guilt, trying to keep his uncontrollable subconscious projections from endangering himself and his teammates. 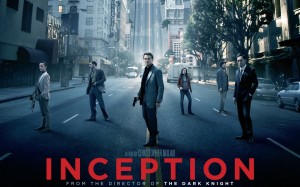 The second film is Michel Gondry’s The Science of Sleep (2006). It follows the story of Stéphane Miroux (Gael García Bernal), a Mexican who moves to France after his father dies. An artist with a tenuous grasp of the French language, his mother lured him to the country by lying about the dead end job she’d lined up for him. He suffers from a lack of creativity in his life until he meets his neighbor across the hall, Stéphanie (Charlotte Gainsbourg), a composer who gets his juices flowing. However, he has a hard time connecting with her because of vivid and trippy dreams that encroach on his waking life and give him a warped sense of reality. 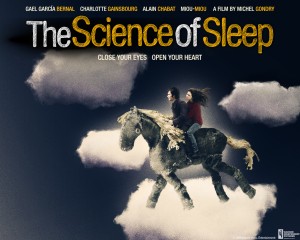 These two films each deal with dreams in very different manners. For one thing, they’re categorized in different genres. Inception is undoubtedly science fiction, featuring realistic technology that allows movement within other people’s minds. There’s mention of it being used to train soldiers in the army, since they can kill each other during combat exercises and then wake up. As such, the film is very grounded in what feels real and people losing sight of reality, causing the viewer to constantly keep track of what is real and what is fake. Sleep, on the other hand, is a film grounded in the present day. It may have long fanciful sequences of psychedelic proportions, but it is still contemporary fiction, with nothing unrealistic actually happening outside of Stéphane’s own mind. And although he does invents a one-second time machine and he puts a mechanism into a stuffed horse to make it gallop, they seem like fanciful imaginings he’s convinced Stéphanie to play along with.

Now, there is no question that Inception outclasses Sleep in terms of overall star quality. Gondry’s ammo consists of a good-looking French actor and cars made out of toilet paper rolls. Nolan has the actors, the action and the complex plot. His work is sleek and sexy and it never questions itself, always knowing where it’s headed. In contrast, The Science of Sleep is a bit of a mess. There’s hardly any plot at all, the action of the film amounting to Stéphane wanting to be with Stéphanie and a few convoluted reasons why that can’t be. The visuals themselves are harsher, taking place in small apartments and oppressive basements, when they aren’t blaring neon colors and volcanoes from within Stéphane’s subconscious.

However dissimilar these two films are, though, they both share a common law: that dreams can be controlled. They are not meaningless entities independent of us; rather, they are intrinsically linked to our thoughts and beliefs and can be exploited as such.

In Inception, dreams can be controlled by a person outside of yourself. The architect designs the dream and can allow others into it. As long as the details of the dream are as close to reality as possible, the architect has free reign in his subject’s mind. The complexity increases when the interlopers fall asleep within the dream, waking up in another dream level closer to the subject’s core subconscious. The exception to this is that when Cobb reaches that last level of pure subconscious, he and his wife Mal (Marion Cotillard) stay down there and build cities together for years, their own architects, suspending reality for so long that Mal forgets they’re dreaming at all.

In Gondry’s film, Stéphane creates a new reality in his dreams as well. The people of his reality are all there, but in kinder, sycophantic forms. When a claymation volcano destroys the world, they beg Stéphane to rebuild it. He does, from the ground up, the construction shown through stop motion leveling of the ground to the building of skyscrapers. His time machine really works, sending a river flowing backward, and the mechanized horse is life-sized and can carry him and Stéphanie on its back.

The films also differ on how dreams affect reality. For Nolan’s characters, any effects are exclusively in their minds. Mal commits suicide because she’s convinced she’s still dreaming and needs to wake up. Robert (Cillian Murphy), the CEO’s son, changes his mind about his father’s inheritance because the team was successful in playing on his emotions. On the other hand, Gondry’s Stéphane deals with changes to his physical situation. In his sleep, he writes Stéphanie a letter and slips it under her door. He dreams that his feet are frozen in the ice of a ski slope and wakes up to discover his feet actually iced over, resting in the freezer of a mini-fridge somehow stationed at the foot of his bed.

The problems begin when the dreams get out of hand and control is taken away from the controller. In Inception, Cobb can’t know the layout of the dreams because then his subconscious projection of Mal will know, too, and she’ll act independently to keep him with her. In Sleep, Stéphane sleepwalks and does things in his real life while he’s asleep, eventually escalating to the point where he accidentally asks the real Stéphanie to marry him. He thinks he’s still dreaming and talking to her doppelgänger, but he has in fact already woken up and now faces her, having freaked her out beyond repair. 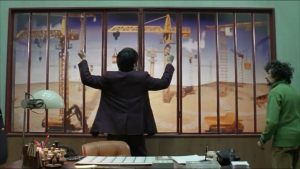 Up until that point, Stéphane’s dreams defied the rules of Nolan’s world: he, as well as the audience, always knew when he was dreaming. The people of Inception are constantly worrying about being able to tell the difference, knowing from Mal’s example how easy it is to make a mistake. They have personalized totems to inform them whether or not they’re dreaming or waking. When Stéphane confuses his dreams with reality, he seems to be falling into a situation such as the world described in Inception, but in less of an absolute: we get a gnawing sensation that Stéphane could be going mad, dreams infiltrating his reality rather than him being in one or the other. And yet, the end of Sleep seems to say that this is okay; that the only place Stéphane can find happiness is actually in his dreams, riding a stuffed horse with Stéphanie. And, some would say, that’s how Inception ends as well.
The difference between Stéphane- and Cobb’s situations is that Stéphane is yearning to share his dreams with someone while Cobb would optimally be working alone. Stéphane latches on to Stéphanie when he thinks they share a common brainwave in hopes that they can share their creativity with each other and shape new worlds together. On the other hand, Cobb wishes he could do everything alone. Unfortunately, his subconscious keeps getting in the way with Mal trying to trap him in his dreams, so he brings someone else in to be the architect in an attempt to get around those issues.

What these two films most agree on is that everyone has the capacity to be happy on a subconscious level, even though that goal may be unrealistic. While Nolan’s approach is to have a character trying to distract himself from the tragedy and hopelessness surrounding him, content to turn away from his truth-telling totem at the last moment as long as he has his children with him at last, Gondry focuses on a character whose intense, artistic personality forced him to pursue his heart’s desire with wild abandon. Stéphane’s mistake in Sleep is that he thinks he somehow communicated his sleep-written note to Stéphanie, when in reality she actually read it before he got it back. Unfortunately, he think this makes them soul mates and so he relentlessly chases after her until at last he has to admit they cannot be together.

The fact of the matter is that Nolan treats dreams as a plot device. Aside from the beautiful scene when the city folds in on itself in Cobb’s subconscious and the floating fight scenes in the second level of Robert’s subconscious, Nolan never really takes pleasure in the possibilities of dream life. The action sequences dominate the film, with the dream motif serving as a set of rules to follow. Gondry, on the other hand, plots with overemotional, very French indie dramatics that then explode onto the screen in technicolor. Stéphane is an especially hard character to relate to, since he starts out as an adorably subpar multilingual but then slowly progresses to become unreasonable and alienating.

The lasting feeling is that Nolan may have taken the risk with his budget, but Gondry seems to be the one to push the envelope on the subject matter. However, even though both films agree that their characters need to confront their loss of control and accept it, they are still allowed to turn away from reality and find peace elsewhere. While it is problematic for the larger picture, it is nonetheless a beautiful place to leave them, existing equally for the audience as it does for them.

Alisa Ungar-Sargon is a developing writer currently based in Chicago, IL. When she’s not hunched over a laptop or eating cupcakes, you can find her driving along Lake Michigan and brainstorming new ways to sound clever. 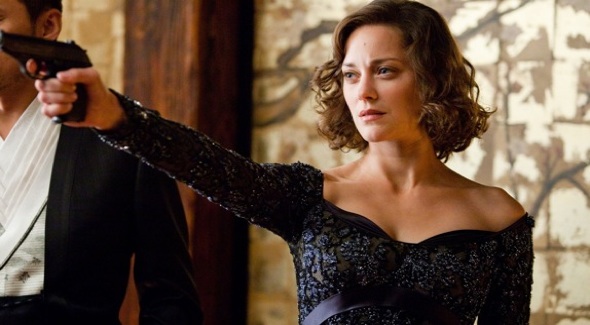 [Do the protagonists of Inception and Science of Sleep accept their loss of control? Or have they retreated into a reality of their own making? Sound off in the comments! – Ed.]

4 Comments on “Control in the Subconscious”