If you Google Working Girl, you’ll discover that it’s described as a “romantic comedy” and “an inspiring tale”. If you watch it, you’ll probably think of Tess McGill’s story as “feel good”. If you spend a weekend, like I did, thinking critically about why Katherine Parker is painted as a venomous villainess and why Kevin Spacey and Oliver Platt’s characters get away with pressuring women into prostitution, then you start to look at the film as a disturbing glimpse into the double standard that permeates business culture.

The lesson of the film isn’t that women can succeed in a man’s world by working together; the lesson is that women have to destroy each other to ensure only middling success.

Tess McGill (Melanie Griffith) is the heroine of Working Girl and Katherine Parker (Sigourney Weaver) is clearly painted as the villain, but upon further inspection the morality of both characters and their actions falls under suspicion. Katherine steals one good idea from Tess, but Tess steals Katherine’s entire life. She moves into Katherine’s home and into her office at work. Tess goes through Katherine’s home office, medicine cabinet and closet, taking whatever she likes. Tess even steals Katherine’s lover. Granted, Jack Trainer is a grown man who can choose whom he loves for himself. However, it should be noted that Katherine stole one idea from Tess’s brain and Tess stole Katherine’s entire identity. Katherine certainly deserved some kind of comeuppance. Plagiarism is most definitely both a legal and moral offense, but Tess’s revenge goes beyond even an eye for an eye. It’s an entire body for an eye.

It is fun to watch Katherine get her comeuppance, but Katherine is the only character in the entire movie who actually gets any payback. The men in Working Girl get away with complete moral bankruptcy. In fact, they are typically rewarded for their terrible behavior. Kevin Spacey snorts cocaine and sexually harasses Tess, but he gets to keep his job. Oliver Platt pimps Tess out and only suffers the fleeting shame of being a mid-day punchline. Even Tess’s horrible boyfriend, as played by Alec Baldwin with his trademark smarm, gets rewarded for being an asshole. She walks in on him cheating on her and by the end of the movie, they’ve become friends They both are advancing in their careers and Baldwin’s character gets to date the woman he cheated on Tess with. Finally Harrison Ford’s Jack Trainer gets to be a sleazebag and the romantic hero. 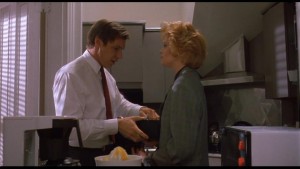 When we first meet Jack Trainer, we believe that he is going to date rape Tess. The fact that he doesn’t—that he takes her home with him, undresses her and lets her sleep in his bed—is supposed to be proof of his moral compunction. This is after he liquors her up, refuses to tell her his name and pretty much makes it clear that his only interest in her is physical. It’s supposed to be a compliment when he says, “You’re the first woman I’ve seen in one of these damn things that dresses like a woman, not like a woman thinks a man would dress if he was a woman.”

There is definitely something to be said for the fact that much of Katherine and Tess’s individual power comes from their ability to be a woman. Both use sex(uality) to finesse their way into meetings and alliances. Jack’s comments and both Katherine and Tess’s behavior illustrates that women are not equals in the business world. If they were, they could be seen not as sexual objects, but intellects.

Even the title of the film is rife with tension. Maybe it wasn’t as controversial in the 1980’s, but nowadays the use of the word “girl” to describe a grown woman is a huge source of contention. Is the word “girl” truly demeaning, or is it threatening? There’s a moment when Katherine and Tess meet where an unspoken power battle takes place over the issue of their ages. The much more successful, sophisticated and urbane Katherine is slightly younger than Tess. Tess sheepishly (and Melanie Griffith did deserve an Academy Award nomination for the wide spectrum of conflicting emotions Tess’s face reveals in this scene) admits that she has never worked for anyone younger before, nor for anyone female. “Is that going to be a problem?” Katherine asks as she only half suppresses a grin. Tess’s answer is no, but it winds up being a huge problem.

Why? Because youth in a woman often equals desirability which in turn equals power. 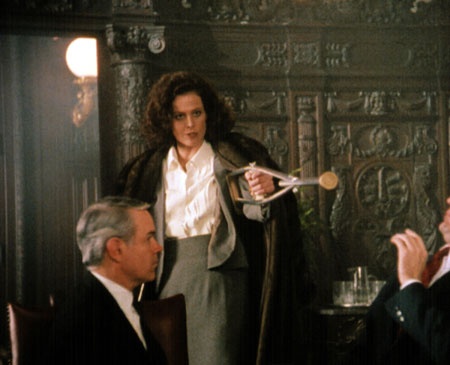 Note how ogrish she looks in this shot: rings under her eyes, hulking shoulders (due to the coat) and a threatening metal claw.

It’s kind of terrifying to consider the fact that there are probably many women in business today who grew up inspired by Working Girl. It’s the All About Eve of the business world. However, All About Eve delivers a far more unflinching look at the issues that women face when pursuing power. It’s clear at the end of All About Eve that Eve Harrington is going to be overthrown by Daphne and that the rest of the cast of characters finally sees Eve’s machinations for what they are. The ending of Working Girl is far more confusing. Do Jack and Trask see Tess as someone who is just as conniving as Katherine (or any man in the industry)? Is Katherine supposed to get any kind of sympathy from the audience? Is Tess even aware that she’s setting herself up to be ruined by her assistant?

When we first meet Tess’s assistant, she has brazenly taken over Tess’s office, using it for her own personal phone calls. There’s also a bit of attitude when she asks, “What do you expect from me?” Tess tries to finally be the better person—or boss, in this case. She says they are equals (which they most certainly are not in the professional sense of the word) and that Tess pretty much won’t be expecting much from her new assistant. Tess is essentially setting herself up to be pushed aside by her own assistant, the same way Katherine was by her. The cycle is going to continue. 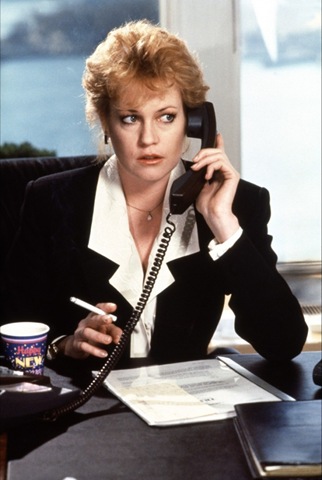 In Working Girl, women are pitted against other women, but that’s not the biggest tragedy. The tragedy is that the men are still exploiting the women mentally, emotionally and sexually without recourse. Katherine, Tess and the other female characters (including an HR director played by Olympia Dukakis) seem to accept that they can never change the fact that men can do anything in the world of Working Girl and get away with it, because for men there are no rules. As Katherine smoothly tells Tess, “Never burn bridges. Today’s junior prick, tomorrow’s senior partner!” The reason that the men can get away with all of their misdeeds is because the men never blow the whistle on each other. The only people who get in trouble are women. The reason for that is unlike men, the women don’t support each other. Working Girl not only illustrates this practice, but presents it as a success story.

What makes Working Girl such a compelling piece of anti-feminist propaganda is its witty writing, brilliant performances and unflinching realism. It’s not farcical like the earlier feminist revenge comedy, Nine to Five, nor is it fantastical like later feminist empowerment flick Legally Blonde. Tess seems more like a real woman because she is more realistic than Dolly Parton’s Doralee Rhodes or Reese Witherspoon’s Elle Woods. She wears sneakers on the street and sweats when she has to push around dim sum. I’m not going to lie: it is a good movie. I liked it. Which is the problem. Women shouldn’t watch a film about how they can’t ever beat the system and think it was “fun”. It should be terrifying.

[What say you, Overthinkers? Does Working Girl’s cat-eat-cat message ruin the fun? Or can you still enjoy a movie even if it’s a little bit regressive? Sound off in the comments!] 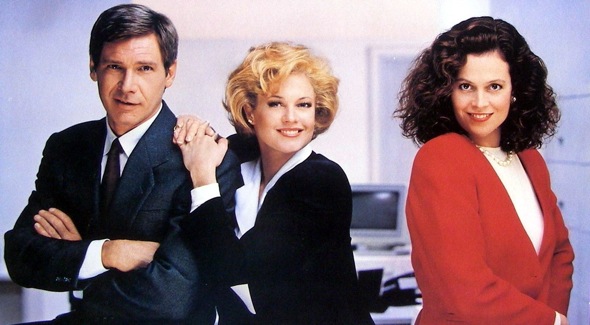 Meghan O’Keefe is a stand-up comic and writer living in New York. When she’s not guesting for Overthinking It, she writes for HelloGiggles, The Hairpin, Splitsider and The Apiary.

10 Comments on “Coming Through The Fog, Your Sons and Daughters”