My introduction to the Elder Scrolls series came with Elder Scrolls III: Morrowind. Set in the Imperial backwater of Vvardenfell, it sets you loose in the internecine squabbles of an island divided between noble Houses and rural tribes. The three god-kings of Vivec, Almalexia and Sotha Sil rule over the island continent, cloistered away in exotic fortresses. You can either explore the island to your heart’s content, gaining treasure and rising in stature among the various factions, or you can pursue the main quest and prevent the return of the imprisoned god Dagoth Ur. In the course of hours of play, you might do all of the above. 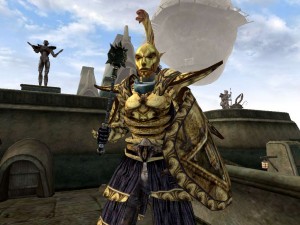 The setting fascinated me: a weird blend of Byzantine decadence, Oriental religion and unique mythology. While plenty of games reveal their world through in-game text (see Deus Ex; see the journal entries in SSI’s “Gold Box” AD&D games), Morrowind‘s books and scrolls were unique. They weren’t just one-radian knockoffs of medieval Western Europe, Tolkien with the serial number scratched out. It was esoteric and challenging. I loved it.

For instance, here’s half of the first Sermon of the Thirty-Six Lessons of Vivec:

He was born in the ash among the Velothi, anon Chimer, before the war with the northern men. Ayem came first to the village of the netchimen, and her shadow was that of Boethiah, who was the Prince of Plots, and things unknown and known would fold themselves around her until they were like stars or the messages of stars. Ayem took a netchiman’s wife and said:

‘I am the Face-Snaked Queen of the Three in One. In you is an image and a seven-syllable spell, AYEM AE SEHTI AE VEHK, which you will repeat to it until mystery comes.’

Then Ayem threw the netchiman’s wife into the ocean water where dreughs took her into castles of glass and coral. They gifted the netchiman’s wife with gills and milk fingers, changing her sex so that she might give birth to the image as an egg. There she stayed for seven or eight months.

Then Seht came to the netchiman’s wife and said:

‘I am the Clockwork King of the Three in One. In you is an egg of my brother-sister, who possesses invisible knowledge of words and swords, which you shall nurture until the Hortator comes.’

And Seht then extended his hands and multitudes of homunculi came forth, each like a glimmering rope through the water, and they raised the netchiman’s wife back to the surface world and set her down on the shoals of Azura’s coast. There she lay for seven or eight more months, caring for the egg-knowledge by whispering to it the Codes of Mephala and the prophecies of Veloth and even the forbidden teachings of Trinimac.

And so forth. Folks familiar with Judeo-Christian theosophy might recognize the diction of the Old Testament or Torah. Taking Biblical sentence structure and filling it with unfamiliar words helps expose just how weird the Bible is. The netchiman’s wife whispered the Codes of Mephala to the egg-knowledge gifted to her by Ayem, who changed her sex in a coral palace beneath the sea. Got it.

But that’s not the weirdest part! 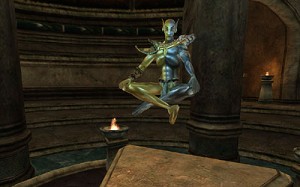 In the course of playing the main quest of Morrowind, you’ll come face to face with Lord Vivec, locked away in the city that bears his name. When you meet him, he will confirm that you are the Nerevarine, the reincarnation of Nerevar, and the only one who can undo the curse that afflicts the continent of Vvardenfell. But he also confirms something that you’ve probably begun to suspect if you’ve been following the in-game text: that Nerevar was once a companion of Vivec as well as the other gods of Morrowind, Almalexia and Sotha Sil. In fact, Vivec and the rest only became gods after uncovering the Heart of Lorkhan, the artifact that Morrowind‘s final villain, Dagoth Ur, is using to escape from Red Mountain. Prior to that, Vivec, Almalexia and Sotha Sil were councilors to Lord Nerevar, who ruled the island of Vvardenfell as a king.

That in itself is a bit of a twist: that the gods of Vvardenfell, the supreme rulers of Morrowind, were once just ordinary people. They only became gods because of a magical relic that they found in the heart of the earth. It makes the ritual and superstition surrounding Vivec seem a little silly: rather than the mysteries of faith needed to comprehend an immortal creator, it’s just the weird trappings of one guy.

The obvious follow-up question is: if Vivec, Almalexia and Sotha Sil got magical god-powers from this relic, what happened to their buddy Nerevar? Here opinions differ. If you ask Vivec or read what he told his priests, Nerevar suffered a fatal wound in the initial fight against Dagoth Ur. However, a sect of dissident priests within Vivec’s ecclesiarchy believe something different: that the tribunal killed Nerevar because he wouldn’t let them use the Heart of Lorkhan to become gods. 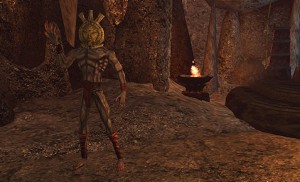 I've been doing push-ups and listening to Slipknot for a THOUSAND YEARS.

Two very different responses. You learn both of them in the course of the main quest. Neither of them changes the outcome, or even the nature of the world. Learning that Vivec was an ordinary guy who might have killed his liege does not smash the priesthood of Vivec in one humiliating blow. But it makes you, the player, regard everything different. Vivec is no longer the sage dispenser of wisdom, giving you the guidance you need to complete your quest and save the world. He’s now a canny manipulator, sending the reincarnation of his onetime king (whom he might have slain) to dispatch his enemy.

Those of you who follow Internet arguments between entrenched political camps will recognize this as historical revisionism. For those of you who lead happier lives: historical revisionism is the act of reinterpreting conventional wisdom surrounding some historical event or figure. Pundits and historians engage in it because people rely on history as a guide for what to do next. Changing the lessons available from history – changing the moral of the fable – can disarm one’s ideological opponents or add more weapons to one’s own arsenal.

To use recent examples from American politics: conservatives have spent years attacking the idea that President Franklin Roosevelt’s “New Deal” helped get the country out of the Great Depression. Some economists, like Harold Cole and Lee Ohanian, have argued that the New Deal actually prolonged the Depression, by diverting capital and labor through inefficient central planners (the CCC, the PWA, the WPA, etc) rather than letting it accrue to where it would be useful. Other historians have argued that the New Deal was a net harm to America because it legitimized near-fascist levels of government control over business.

On the left side of the aisle, historians like Howard Zinn sought to repaint America’s historical record as well. In A People’s History of the United States, Zinn made the case that the story of America was a story of common people, not elite leaders. It’s from Howard Zinn and historians of his school that we get the image of the Founding Fathers as white, male plantation owners. In defending his book from several critical reviews, Zinn wrote:

My hero is not Theodore Roosevelt, who loved war and congratulated a general after a massacre of Filipino villagers at the turn of the century, but Mark Twain, who denounced the massacre and satirized imperialism. I want young people to understand that ours is a beautiful country, but it has been taken over by men who have no respect for human rights or constitutional liberties. 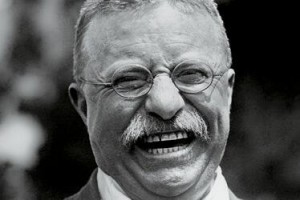 I meant 'Bully' as an encouragement, not an imperative.

Note that neither side is making up facts here. Teddy Roosevelt did indeed congratulate Maj. General Leon Wood after the Moro Crater massacre, just as the PWA was an unprecedented level of federal intervention in the American economy. But not every history textbook emphasizes the same facts or draws the same conclusions from them. Historical revisionism is meant to challenge that.

18 Comments on “Skyrim and Historical Revisionism”