Film still struggles with its unique language. Theatre, by way of comparison, is millennia old. Its primary tool is dialogue: the words of the writers and the emotional inflection of the actors. Literature uses dialogue as well, but adds to that description and metaphor, such that the most unlikely scenarios – one-eyed giants menacing sailors; Spaniards tilting at windmills; bombardiers in the Mediterranean – come alive. Sculpture uses texture and proportion; music uses rhythm and tone; painting uses the illusions of depth and light.

Tomas Alfredson’s Tinker, Tailor, Soldier, Spy is a masterclass in the essential elements of film. While it suffers a little from hustling through a deep, ponderous story – it’s one of the few movies I’ve seen in the last year that could benefit from an extra twenty minutes – those moments that it does share with us are jewels. Alfredson succeeds here because he relies on a motif that can only shine in cinema: the gaze. 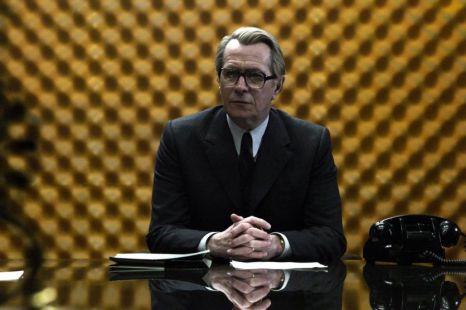 TTSS is notionally a spy movie, but it challenges our traditional notions of the genre. There are no firefights: a gun is fired only four times in the movie, twice in one scene. There are no martial arts setpieces: only one character throws a punch, and that against a defenseless man. There are no car chases, no bombs defused and most of the seductions happen off camera.

The primary action of TTSS is the gaze.

George Smiley (Gary Oldman) is the master of the gaze. Consider the scene where he debriefs Ricki Tarr (Tom Hardy), a burned spy on the run from Istanbul. Tarr fidgets with nervous energy, relieved to tell his story and simultaneously anxious about the pressure he’s under. Smiley, on the other hand, sits perfectly still with his hands folded across his stomach. He drops his gaze upon Tarr and leaves it, like a crushing weight, until he’s squeezed every drop of intelligence out of the man.

This befits Smiley’s reputation as a master interrogator. He’s depicted in the novel, and in the movie, as an expert in ferreting out intelligence. He knows well that adage of old salespeople and negotiators: once the offer is made, the next person to talk loses. The documentarian Errol Morris has found similar things, in the course of making The Thin Blue Line, The Fog of War and other movies: give your subject an opening, then shut up, and they’ll fill the silence with the sound of their own voice.

Smiley’s gaze is such an essential aspect of his character that he’s never separate from it, or from the tools that enable it, particularly his bifocals. He almost never takes them off. I’m tempted to say never, but I don’t have the movie in front of me. In any case, there are two times he keeps them on that call attention to them. One is whenever he goes swimming, an image we return to more than once throughout the film. Smiley bobs along, keeping his head above the water in a mincing breaststroke, swimming through a heated public pond with his glasses on. As anyone who’s worn glasses can tell you, this is rather unusual behavior.

The second time is throughout the entire movie and takes a bit of explanation. One of the most famous mannerisms of George Smiley, the fictional character, is cleaning his glasses with the end of his tie. It’s a mild habit, but it’s also a disarming maneuver that puts his subjects at ease: nothing’s more harmless than a man cleaning his glasses. He does this several times throughout the novel TTSS. When filming the BBC miniseries adaptation in 1979, Alec Guinness (who played Smiley) called le Carre’s attention to the fact that Smiley would have to fish his tie out of his vest in order to pull this stunt off. le Carre then integrated this detail into the final Smiley novel, Smiley’s People.

Oldman as Smiley never does this. Again, I’m going off of my limited human recollection here, but I was deliberately looking for the affectation throughout the movie and don’t remember it. And Oldman reviewed the book religiously throughout the production process, by his own account, so the gesture wouldn’t have been lost on him. But he chose not to use it.

In fact, I can only recall one point when we see Smiley with his glasses off: when he wakes up, as if from a disorienting dream, very early in the film. His bifocals lie on the covers next to him (as with swimming, the kind of behavior that most glasses wearers avoid). He is temporarily blind. He is just about to be brought back into the Circus, in the most secret capacity, to see what he has missed all these years. 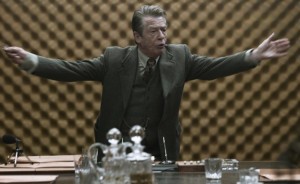 Throughout the movie, we follow Smiley’s gaze as he uncovers the identity of the traitor at the top of the Circus. We see scenes that give us glimpses of character, but we never see the truth of them until Smiley sees them. For instance, the opening scene is the late night visit between Jim Prideaux and Control in which Prideaux is dispatched to Czechoslovakia. We see some of it – enough to establish the intensity of Control, the confusion of Prideaux – but not all of it. We don’t see Control giving codenames to his circle of advisors until later: after Smiley has found the chess pieces, after Smiley has interviewed Prideaux, after more of the puzzle has been uncovered. We are notionally an omnisicent audience, but our gaze is Smiley’s gaze.

We don’t spend the entire movie with Smiley, of course, but even the scenes from other perspectives are defined by their claustrophobic perspective. Consider the recurring image of a manila folder placed in a secure elevator. It rises through the dull levels of the Circus, the same way Guillam passes from the duty officer’s desk to the briefing rooms on his way to work. It is “Witchcraft,” the intelligence product of source Merlin. Smiley’s charge is to find which member of the Circus is false, but in doing so, he must also uncover whether Witchcraft is false. Information can be a traitor or a double-agent, just as a person can, and so information can be a character. The manila folder is a character, and we get to see the world from its perspective more than once. 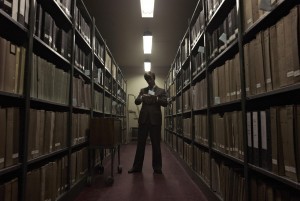 Of course, as telling as what we do see are the two crucial elements we don’t see, the permanent blind spots in Smiley’s vision: Karla and Ann. Karla is Smiley’s nemesis, his opposite number in the KGB, a spymaster of legendary ruthlessness and ingenuity. Other people in the movie see him – Smiley interviewed him once; Prideaux was interrogated by him – but we, the audience, can’t. Ann is George Smiley’s wife and his Achilles heel. Her betrayals (we are led to believe there have been more than one) catch the master of intelligence completely off guard. She appears on camera more than once, but never in full focus and always with her face obscured. But she is the only person capable of arousing some genuine emotional response in Smiley – usually shock.

Why does gaze matter so much? Because it’s one of the few motifs that works in film better than in any other art form. In a novel, you can describe a protagonist looking at a character, but you can’t convey the gaze as well as you can in a movie. In a painting or a photograph, you can force the audience’s perspective in a particular direction, but you can’t convey the act of gazing as well as you can the content. Only film, with the elements of shot length, focal length, editing and perspective, can turn the gaze into an element of such weight.

The amazing thing about the conspiracy at the heart of TTSS is that it’s not strongly defended. No one needs to dig through ancient tombs or shoot at enemy agents to get it. It’s protected by what Bruce Schneier would call “security through obscurity” – hiding something but putting no barricades in front of it. All it takes is one Russian name, one tampered logbook, and asking the right questions of the right people. All it takes is turning one’s gaze to the right subject and holding it there for as long as you have to. 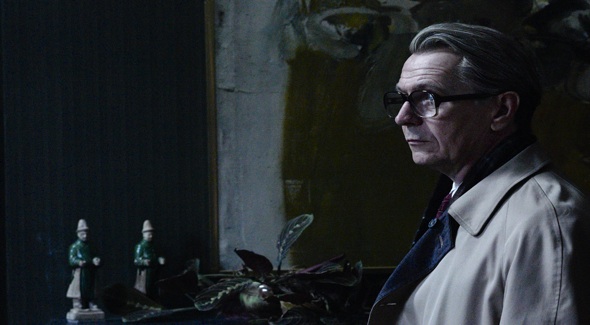 2 Comments on “Gaze as Language in Tinker, Tailor, Soldier, Spy”