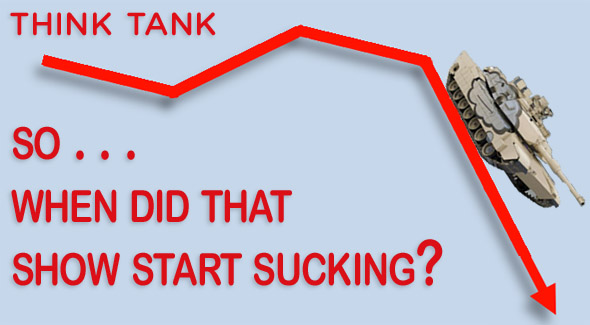 A lot of great shows run out of steam long before they leave the airwaves.  In this Think Tank, the Overthinkers discuss those once mighty shows and why they fell.  What show do you think fell furthest and why?

The Glee reviews on Gawker have become increasingly hostile. This makes me wonder, what are the TV shows with the sharpest drop-offs in quality/fan base? I remember Heroes started off super-popular, than crashed hard in its second season. Didn’t watch it, but it went from geek favorite to object of scorn in about six months.

Shechner:
Chuck, though it’s less an object of scorn as it is an object lesson in quality control.  Perhaps sci-fi geeks have gotten used to being disappointed over time, whilst those of other genres are only now getting acquainted with the phenomenon?

Fenzel:
I always like to trot out Gene Roddenbury’s Andromeda at times like this. And that show had a Dantean descent through deeper circles of mediocrity every season. Although, hey, I like to trot it out anytime, who am I kidding?

Gene Roddenbury’s Earth: Final Conflict actually had a much sharper drop-off in quality. Although that was around Season 4, not season 1. The Canadian sci-fi show Lexx also fell _way_ off the map after season 2. Season 2 is pretty interesting and scary on a Dr. Who-ish level. Season 3 is straight trash.

But none of these shows are what I would call “very good” anyway. What makes them remarkable is just how terrible they got – specifically because they were sci-fi shows that changed production companies or some other syndication contract issue such that they lost their special effects budgets and found an arbitrary reason to either make characters who had previously worn a lot of makeup look like normal people as well as maroon their characters somewhere mundane and earth-like because they no longer had the budget to show spaceships.

I would say “The Weakest Link” qualifies. It was totally hot shit in the USA for almost exactly one year, and then it just totally bombed out and recorded a shitload of episodes for like PAX and the Game Show Network.

And, while I love it dearly, by the end, _24_ was at the point where _Hard Target_ was sending it concerned emails and scheduling an intervention.

One big reason why sci fi does this so much is syndication. If the production of the show and the distribution and broadcast of the show are closely linked, a show isn’t likely to be allowed to suck and lose its entire following without getting canceled, and its budget isn’t likely to be cut so severely that its show concept just doesn’t work, but it can still get produced.

If you’re shopping around a sci-fi show, it’s unlikely you have end-to-end interest from a network. You’re niche programming looking to fill spots. And you’re seen as interchangeable. So it’s more likely a sci-fi show will jump from business partner to business partner – whereas if Fox doesn’t want to show Glee anymore, other than reruns, they probably just make a different show rather than make really cheap shitty episodes of Glee.

Also with sci-fi, you see the money onscreen, so it’s easier to know for sure when the producers hit hard times or the networks aren’t interested anymore.

Twin Peaks is another example.  Also: AMC’s The Killing. The critics went nuts over the first episode, liked the second episode, and then by the fourth episode decided it was the worst show ever. And then came the season finale, which made most critics and fans  feel murdery.

Ah, true, true! I had forgotten about your Killing posts (sorry!), but, well, there you are :)

I own up to my sins.

Actually, I’d disagree about Twin Peaks. Sure, the second season misses out on a lot of the core factors that made the first so great (really taking its time to emphasize ambiance over plot, for one…), but there’s still a lot of good stuff going on there.  For one, the series finale is one of the most impressively shocking pieces of avante guarde artistry ever put on national television, unless–like me–you tend to turn off the sound during super bowl halftimes and watch it instead while listening to Trout Mask Replica.

In light of Perich’s new undertaking, the West Wing deserves mention here.   For a lot of fans and reviewers, the show lost its soul when Sorkin left.  Personally, I really enjoyed the subsequent seasons. Their bleak look at the impotence of even the most powerful man in the world to effect change actually helps me deal with certain political disappointments of mine.  On a similarly noncommital note, I also want to mention Buffy the Vampire Slayer. Seemed like half of the show’s fanbase started bitching the second that Dawn showed up in Season 5.

So, readers, what shows disappointed you most in the end?  What makes a show go off the rails? Sound off in the comments!