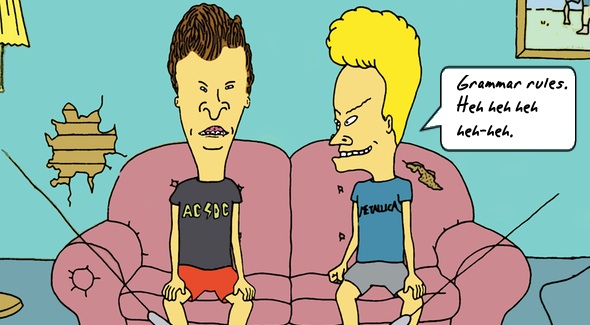 On the last Overthinking It Podcast, Fenzel and I got into a discussion about the return of Beavis & Butt-head. I had recently seen the show on MTV’s website, and I delivered the news that “Beavis & Butt-head is back!”

Fenzel asked whether I didn’t mean “Beavis & Butt-head are back,” since compound subjects joined by “and” take a plural verb.

We’d like to imagine our use of language is consistent (it isn’t, but we still like to imagine it), and so one of the ways to resolve a question is to consider similar questions. In this case, Pete’s question about the number of verbs is related to collective nouns, or what H. W. Fowler calls “nouns of multitude.” These include words like “firm,” “band,” and “party.”

The deciding factor is whether you are using the noun to refer to the collective as a single entity (singular) or as a group of single individuals (plural). In natural language, we would say “R.E.M. is breaking up” (you’re referring to a single band, so the verb is singular—all the more persuasive because “breaking up” posits a unity that is being disrupted)[1], but we would say “R.E.M. are pursuing solo projects” (admittedly tortured syntax, but the point is clear: you’re referring to a collection of individuals, so the verb is plural.)

This determination was borne out by evidence. Beavis & Butt-head Do America, the movie title, refers to both individual characters and not to the show as a collective. Beavis and Butt-head, the separate entities, each do America separately.

That seemed to settle the grammatical issue, but I had the nagging suspicion that I couldn’t shake that there was something to overthink here. And, upon reflection, I think it’s this: The distinction that Fenzel and I ended up drawing has to do not just with grammatical number, but with the relationship of the speaker to the work of art she is describing.

What I’m about to suggest is limited to works of narrative art—it can be any sort of fiction in any medium, but it must be a story with characters. When we talk about these works, we are signalling our role as an audience member and talking about the work as a cultural artifact. “Beavis & Butt-head is back” implies that Beavis & Butt-head is a thing and that I am separate from that thing.

Contrast the statement, “Beavis and Butt-head are working at the Burger World.” I’m talking about the characters as individuals and using plural verbs, but there’s something else: I’m talking about them as though they are ontologically on par with me—as though I’ve stepped into the narrative world. And if I were to supply some context, as in “In the latest episode, Beavis and Butt-head watch music videos,” it makes the leap explicit. More on the prepositions in a minute.

First, let’s ring the changes: The Smurfs (the show) was adapted as a movie, but the smurfs (all the little blue pests themselves) were awful in it. Or, more generally, though The Smurfs smurfs smurfily, the smurfs smurf smurfily. And when you say the latter, you’ve entered their diagetic or imaginative world—and started speaking their language. (You know what’s a funny word? Smurf. Type it eight times in a paragraph and it’s bound to look wrong.)

Bill and Ted are in the phone booth in the circuits of time, but Bill and Ted is in the five dollar bin at Blockbuster. Harry and the Hendersons (a great example because the title contains both a conjunction and a proper noun in plural but we still use…) is a moving tribute to the humanity of yetis everywhere. The Kardashians is a terrible show, but the Kardashians are terrible people.

There are some corner cases, as when the title names a collective entity other than characters: Star Wars was ruined by the prequels, but the star wars were won by the clone army. Or at least one of them was. Covert Affairs is on tonight. So is Weeds. So is Wings, but it (singular pronoun) is in syndication.

(Adolescent Sublimity is entirely made up. But if it were to be made, I know a podcast that would be more than happy to cover it.)

The prepositions do some of the work in this last example. “As” implies likeness between two things—when one thing can stand in as another, they must be similar in some respect. A TV show for a TV show, a narrative for a narrative. On the other hand, saying that characters are “in” a show implies an ontological difference. A narrative has a different quality of being than the characters it contains do, precisely because the show can do the containing and the characters have to be contained. (The Simpsons played with this difference in the episode where a 3D-animated Homer walked down a live-action city street.)

So when we watch or think about a TV show, there’s a three part structure: On one side there’s a character, on the other the audience, and then there’s the show which is the barrier between them. When you talk about the show and use a singular verb, you are staying firmly on your side of the fence. What I’m suggesting is that when you use the plural verb—”Beavis and Butt-head are“—you have somehow leaped the fence, and the structure of the language you use implies that the characters are independent entities (which they aren’t) and have equal ontological status to you (which they don’t).

I can foresee a number of objections, one being that this is a distinction without a meaningful difference. We talk about all kinds of things all the time—objects, ideas, suggestions, wishes, characters, works of art, abstract principles—and it doesn’t give anybody any trouble. Fair enough. But suppose I were the Parents Television Council or something, and I wanted to warn America: “Beavis and Butt-head are terrible role models.” This hypothetical concerned watchdog group would be ascribing a certain amount of agency to the characters—the ability to model behavior for children. Ironically, this is exactly the thing they were trying to minimize, but in the attempt, they managed to actually elevate the characters to entities on par with other (real) bad role models like Howard Stern or your older brother. The language itself is working against them.

This is an extremely fiddly point and probably not widely applicable outside of the limited circumstances I describe. But if you, like me, believe that one of the most important factors of intelligence is negotiating your path up and down levels of abstraction, it’s very important to be explicit about which level you stand on. The grammatical relationship elides the relationship of the speaker to a work’s diagesis; I’m not sure it’s always clear to us that we know what we’re talking about.

What do we talk about when we talk about fictional characters? Are the more occasions of slippage than the one I’m describing here? Are there narratives where you’d be more or less reluctant to talk about the characters independently? Think I’m overstating the case? Sound off in the comments!