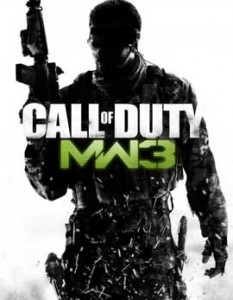 This WILL be the highest grossing entertainment product of the year. Harry who? Transformers what?

Tis fall, that sublime liminal season when a young man’s fancy lightly turns to thoughts of pwning. Just as the summer is glutted with popcorn movies, video game developers tend to launch their “AAA” titles in Oct-Nov. (Even in these days when videogames are played more and more by adults, people tend to buy a ton of them as Christmas gifts.) And the biggest video games of all are first-person shooters. Call of Duty: Black Ops hit shelves last November 9. Within five days, it grossed over $650 million. After a month, it was over a billion. In other words, Avatar is no longer the highest-grossing Sam Worthington project (at least domestically).

These AAA first person shooters have spare-no-expense single player story modes. Black Ops was co-written by David Goyer, a screenwriter who worked on Batman Begins and The Dark Knight. The score was written by Hans Zimmer. In addition to Sam Worthington, you also step into the shoes of Gary Oldman and Ed Harris. These single player “campaigns” are probably my favorite things to do on my Xbox. Each mission is like a tiny Michael Bay film. The second level of Modern Warfare 2, which I still replay often, starts with you scaling a wall of ice. You infiltrate a Russian base, sneaking past the guards and picking off stragglers. Then all hell breaks loose, and you’re mowing down dozens of enemies while sprinting across a burning runway. Then you’re off on a breakneck snowmobile chase through the woods, bullets clipping the trees around you. Finally, you accelerate down a steep hill and jump over a huge chasm, skidding to a stop at the helicopter on the other side. All this takes about 15 minutes, and it’s a total rush.

But after the first week of release, it seems like no one besides me cares about the story. After all, it only takes about 10 hours to complete, max. What keeps people playing is online multiplayer. 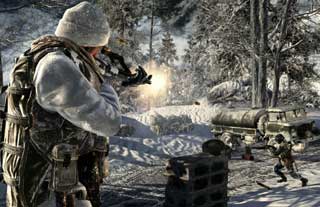 The gentleman has found someone to shoot at. That's better than I usually do.

First person shooters allow you to compete online with friends and strangers, across many modes and many maps. For a lot of gamers, multiplayer is practically a part-time job. In the first 45 days that Black Ops was released, players logged over 600 million hours.

Even though I like the single player stuff, it gets old after a while, and competing against real people sounds like fun. But imagine if the first time you wanted to try basketball, they just threw you out on the court with the next nine people in the world who happened to be in the mood for a game that second. Some of them might have logged hundreds of hours on the court. Some of them might practice together every day. All of them would be better than you. Also, they are all wearing special basketball equipment, and you’re in your street clothes.

You would not score many baskets, you would not have much fun, and you wouldn’t make very many new friends. You might not feel like playing basketball again anytime soon.

That, in a nutshell, has been my experience with the multiplayer mode of first person shooters. I get placed into random games with people who have every square inch of these maps memorized. I take ten steps, then get sniped. I respawn, take another ten steps, then get lit on fire. I can see my team is trying to do something, but I’m not sure what I can do to help. Even when I manage to meet an enemy in a fair fight, I’m usually too slow to pick them off.

Think about how a single player campaign is put together. Designers spent months trying to minimize frustration while maximizing fun. One of my favorite descriptions of this process was in Wired magazine, many years back.

The room we’re monitoring is wired with video cameras that Pagulayan can swivel around to record the player’s expressions or see which buttons they’re pressing on the controller. Every moment of onscreen action is being digitally recorded.

Midway through the first level, his test subject stumbles into an area cluttered with boxes, where aliens — chattering little Grunts and howling, towering Brutes — quickly surround her. She’s butchered in about 15 seconds. She keeps plowing back into the same battle but gets killed over and over again.

“Here’s the problem,” Pagulayan mutters, motioning to a computer monitor that shows us the game from the player’s perspective. He points to a bunch of grenades lying on the ground. She ought to be picking those up and using them, he says, but the grenades aren’t visible enough. “There’s a million of them, but she just missed them, dammit. She charged right in.” He shakes his head. “That’s not acceptable.” 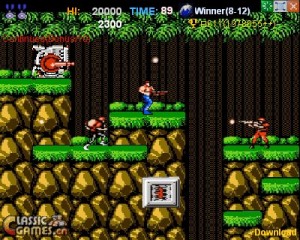 Contra has some nice flow. The challenge ramps up gradually, and the enemies attack in the same way everytime. If there was a multiplayer mode where you fought other Contra wearing a whole rainbow of pant colors, it would be a VERY different experience.

Game designers do not want their games to be boring, but they also don’t want them to be frustrating. They want their players in the “flow state,” constantly challenged but never overwhelmed. The game’s difficulty increases gradually from stage to stage, so you seldom hit a section that’s suddenly way beyond your abilities. And crucially, the enemies in a first person shooter will always attack in the same spots, in the same way. So each time you get killed, you learn something valuable about what to try next time. Eventually, you memorize the level, and you’re anticipating the enemies before they walk through the door.

Multiplayer, on the other hand, is unpredictable and unforgiving. You’re at a distinct disadvantage, because everyone else knows all the maps and strategies that will take you many hours to pick up by osmosis. Your opponents will not go easy on you because it’s your first time. They may target you even more once they realize you have no idea what you’re doing. And of course, there are the “perks.” As you play round after round, you earn points which you can then use to upgrade your character. For example, veteran players may not appear on your radar, but you appear on theirs. They might have weapons you don’t have. Maybe they can plant explosives, and you can’t. They might even be able to call in a plane to drop napalm on you. These perks are, of course, meant to be an incentive to keep playing. For me, it just feels like an impossible learning curve for the new guy.

In a way, the multiplayer mode of these shooters makes for a TERRIBLE game, because the difficulty curve is the exact opposite of what you want it to be. It’s the most frustrating right when you start. It’s hard for me to reconcile this with these games’ insane popularity, but I’d say it has to do a lot with social pressures. There are a lot of peer groups in which first person shooters are an important bonding activity. If all your friends are playing these games, the learning curve is worth climbing. It’s a lot like golf, actually. That’s another game that seems absolutely impossible the first time you try it (not to mention very expensive). But golf happens to be a great game to play with friends or business associates. Depending on who you are, your peer group might expect it, and so a surprising amount of people put in the hours to learn to hit a golf ball. 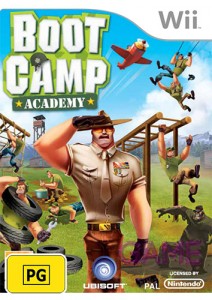 I searched for "video game boot camp," and I found this. Who thought this was a good idea? "Hey, you know what children think is really fun? Infantry basic training! Let's turn that into a video game!" Although if they got R. Lee Ermey involved, then I'm totally buying this.

But here’s a revelation I had recently: no one expects to get good at golf practicing on their own. You need a lesson to get you started. You need a teacher to show you the basics. You get a native speaker to teach you a new language. You meet with a personal trainer to set up an exercise plan. You sign up for a cooking class if you want to learn why your soufflés keep falling. After a couple of lessons, maybe you’ll be ready to practice on your own, perhaps setting up future sessions if you hit a wall and want to bring your skills to the next level. Sure, you COULD figure out these things on your own, but it will take longer, and you’ll probably learn some bad habits.

The idea of hiring a video game coach seems strange, but how is it different than hiring a tennis coach to help you with your serve? If you happen to play Call of Duty instead of tennis, I don’t see why you shouldn’t get a little advice from an expert. I want someone to come over to my apartment and help me power through the most overwhelming part of the learning curve. This person will show me the maps and their secret hiding places. He’ll (I’m assuming it will be a he) introduce me to each mode, and dominant strategies for each. He’ll help me pick equipment and perks that make sense for me. And he’ll play alongside me in live matches, so I can follow in his footsteps and see how it’s done. Here’s who I’m looking for:

Multiplayer is always going to be really hard, and I will never be remotely good at it. But I want to at least figure out what the hell is going on, so I can find out how bad I really am. For that, I need a personal trainer, and I will pay this person for a few lessons (rate TBD). Who’s interested?

18 Comments on “The Underserved Market for Video Game Personal Trainers”