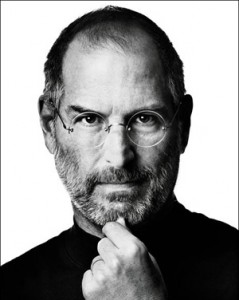 When I learned that Steve Jobs had died, my thoughts went immediately to Charles Shultz. Like Jobs, he was a workaholic (Shultz took only one vacation in 50 years, to celebrate his 75th birthday). Like Jobs, Shultz had an obsession with details (he refused to hire an inker or a letterer, until Parkinson’s made his handwriting too shaky). And Shultz died on February 12, 2000, the day before his final Peanuts strip ran. Steve lived just long enough to see his successor deliver his first keynote, and perhaps conduct one final interview with his biographer (the book will be released on November 21).

Some folks in the tech press viewed yesterday’s iPhone 4S announcement as a disappointment. But if that’s true, then it’s an awesome testament to just how far Steve had raised the bar. Poor Tim Cook got up there and demonstrated Suri, a new voice recognizing “personal assistant.” You ask it to remind you to buy milk when you arrived at the grocery store, and it WILL. You ask it for good burger joints in the neighborhood, and it will FIND THEM. You can now have a conversation with your phone, which used to be something that only Tony Stark could do.

Tim Cook announced this, plus a processor seven times as fast as the iPhone 4 and a camera with twice as many pixels. And immediately, Apple’s stock tanked. This is what Steve Jobs accomplished; he blew our minds so many times that we came to EXPECT mind-blowingness. It was no longer enough to have a phone that could take dictation and shoot high definition video. People expected a phone that could bend the very fabric of space-time itself. A part of me wonders if Steve Jobs lived, would he have been able to keep meeting the insane expectations people had for him? How many rabbits can one man pull out of his iHat?

Let’s not forget that in addition to all the Apple stuff, Jobs was CEO of Pixar during the Toy Story days. Un-freaking-believable. 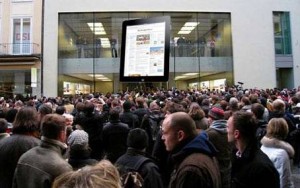 A line outside an Apple store. This happens ALL THE TIME.

Of course, Apple products are about way more than the technology, the same way a BMW is about more than its spec sheet. They are objects of desire. They are personal statements. Think about all those recent graduates who can barely afford ramen, but still wouldn’t be caught dead using a PC. Apple products have an aura that’s every bit as carefully engineered as their aircraft-grade aluminum casings. Steve could take credit for that. He had a vision of what he wanted Apple to be, and he injected that spirit into every aspect of the business. He oversaw the software. He oversaw the hardware. He even made sure the packaging was special. (Man, Apple made some gorgeous packaging over the years.) He would send everything back again and again until it was perfect. As Mr. Wrather pointed out to me this evening, “You had the sense as a consumer that God’s in his heaven and all’s right with the world. Love him or hate him, Jobs had his hand on the wheel.”

And let’s not forget those audacious ads the company produced! I’m sure that most of Steve’s obituaries are going to quote the famous 1997 “Think Different” commercial: “Here’s to the crazy ones. The misfits. The rebels.” It debuted shortly after Jobs returned to the company he co-founded, after a 12 year hiatus. Jobs helped to write the text, and picked images of his personal heroes to accompany it. Bob Dylan. Jim Henson. Thomas Edison.

Here’s the thing about that ad: it’s unbelievably douchy. This is a COMPUTER ad that doesn’t say a thing about the product and instead shows stock footage of Martin Luther King Jr. and Mahatma Gandhi. Freaking GANDHI. Can you imagine any other company in the world using those two men’s images to sell a product and getting away with it?

But people LOVED that ad! Hell, I love that ad too! I just watched it twice and got a little misty-eyed! It should not work, but it does.

And that, my friends, is the Reality Distortion Field. The term was coined in 1981 (30 years ago!) to describe Jobs, and it’s dead on. Because let’s face it: the iPhone, at the end of the day, is just a phone. But you wouldn’t know that from the people who waited in line for days to get one. I sympathize with every other technology company out there. They can try (and even succeed) at making better technology than Apple, but they can’t design anything people will shower with as much love. Under Steve Jobs, Apple designed legitimately amazing things, but his greatest skill was making people feel those products were even MORE amazing. Even if you’re an Apple hater, you have to admire the man’s ability to sell a product, the way you admire Harold Hill even if he isn’t the bandleader he says he is. 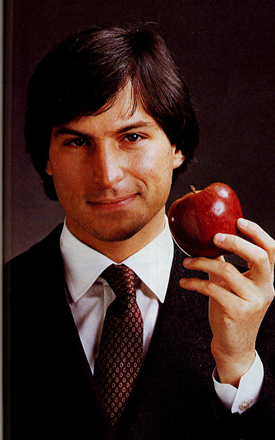 The platonic ideal of the CEO.

But here’s what I’ll miss most about Steve Jobs. Quickly, how many CEOs do you actually admire and like? How many CEOs do you think are cool? ANY? In an age where CEOs are mostly in the news for their oversized golden parachutes, here was a guy who made millions of people want MBAs. He was smart, he was talented, and even in a culture that loves to sneer at its heroes, he was never the bad guy. (Yes, you can quibble all you want about Apple’s totalitarian lockdown of the App Store, but no matter how greedy and authoritarian Steve Jobs may have been, the public loved him.) There are lots of talented CEOs in the world, but Jobs was our greatest celebrity CEO. And with the American economy on shaky ground, we could certainly use more of him. We want kids to look up to entrepreneurs and business leaders, and without Steve, I’m not sure who’s left.

I learned that Steve Jobs was dead on my iPhone tonight. Then I came home to write about it on my MacBook. I’m never owned a computer that didn’t come from Apple, starting with my IIc, and I doubt I ever will. It makes me happy to use Apple products. They’re user-friendly, elegant, and cool. Like Charles Shultz, Steve Jobs lived for his work, and poured himself into every detail of his creations. He may be gone, but every time I hear that warm startup chime, his Reality Distortion Field will be in full effect.