Aladdin is a fairy tale not set in a fairy tale kingdom. In the fictional city of Agrabah, the gulf between the upper and lower class has resulted in a society rampant with crime and poverty. The people are in desperate need of better leadership and there is no male heir apparent. Aladdin is introduced as a character whose hidden inner worth transcends class. Even as a “street rat”, he holds himself with pride, and even as he risks his life to eat, he shares his meal with less fortunate children. However, by the end of the film, it’s clear that Aladdin doesn’t care about helping the people of Agrabah. Western ideas of democracy and social contract just aren’t going to work in Disney’s version of a Middle Eastern milieu.

From what we can gather, Agrabah is a big trade town. There is access to jewels and wonders, but the common person lives in poverty. (Yes, we see beautiful maidens draped in gauze, but let’s not try to think too long on why beautiful, fashionably dressed women living together without a man are the only people who seem to be living comfortably in Agrabah.) The sellers in the marketplace are incredibly attuned to theft. The Palace Guards seem to exist only to pursue thieves. These two facts together suggest that theft is a huge problem, which also suggests poverty is prevalent in the town.

It’s a stark difference to Belle’s poor, but cheerfully bustling “provincial town” in Beauty and the Beast. Belle’s town has a book store, her dad can afford to make an independent living as “an inventor”, and everyone can get drunk every night. They’re lower middle class poor, not Agrabah poor – where survival is an issue on a day to day basis. Unless you have something to sell, you’re not making a living. Otherwise, the smart and able-bodied Aladdin could have found grunt work years earlier. I mean, come on, you saw that pole vault. The kid could have at least made money carrying crates. But evidently, Agrabah’s economy is so poor not even Aladdin can get a job.

Why does living in Agrabah suck? Because the Sultan sucks. There is really no reason why the audience should like the Sultan. While children are presumably having their hands chopped off for stealing an apple to eat for breakfast, the Sultan is playing “stack the toy animals into a tower”. It’d be one thing if Disney had tossed in a line about how poor the kingdom is now that trade with the West or East has died down, but we keep being told (and shown) how exorbitantly wealthy the Sultan is.

When Aladdin finally makes his grand entrance as “Prince Ali”, he also displays ridiculous riches, but he shares them with the town. That’s really why the people of Agrabah go crazy. They get a parade. They get entertainment. Most of all, they get a suitor for the princess who is throwing gold at their feet (“He’s generous…so generous!”). If he marries the princess, the implication is that he will spread some of Agrabah’s wealth around once and awhile. Prince Ali is the Sultan the people of Agrabah need, but supposedly the only thing that matters is whether or not he’s the Sultan Princess Jasmine wants.

When we first meet Jasmine, we are introduced to a character with tremendous potential to be a feminist heroine. She’s feisty and brave, but ultimately, ineffectual. All we see Jasmine do is sit around with a docile tiger and pout. She doesn’t do chores because she’s a princess, but she also doesn’t read books, play music, or talk to any human beings. Ariel and Belle each had a violent thirst for learning; from what we can gather, Jasmine is bored and wants to travel so she can see pretty vistas. Beyond trying to dodge an arranged marriage, Jasmine’s complaints to Aladdin about palace life sound less like a budding feminist finding her voice, and more like the spoiled muse of Pulp’s “Common People”.

Jasmine wants to live like a poor person until trouble comes and then she immediately uses the Sultan’s name as a means of escape. So we have a budding romance between an underdog with a charitable streak and a potential feminist heroine. In the first act, Disney is setting up a storyline where they are left in charge of Agrabah so they can enact change. Except it’s clear that neither Aladdin nor Jasmine want to be in charge. They want to fly away on their magic carpet and see the world while Agrabah burns. They want to make out with each other, but they don’t want to make things better.

After Aladdin and his selfish mortal friends (everyone in this film is selfish unless they are a magic carpet or enslaved genie) defeat Jafar, the genie mentions that Aladdin still has one wish left. The genie is hinting that he can turn Aladdin back into royalty so he can marry his princess and inherit Agrabah’s throne. Most people remember Aladdin selflessly giving his wish to the genie based upon their previous agreement. However, before that moment, Aladdin considers the genie’s new offer and declines. He doesn’t just decline because he wants to free his friend. He declines because he point blank doesn’t want to be the Sultan. His explanation is that he needs to stop pretending to be someone he’s not. What happened to the spunky street rat who wanted to prove he was more than what his impoverished status suggested he was? By the end of the film, the only reason Aladdin wants to be a prince is so he can marry Jasmine. It’s not about self-worth anymore. It’s not about him being a “diamond in the rough”. It’s about him wanting to bone a rich girl.

It is possible that Disney still does believe in Aladdin’s inherent nobility. The Sultan decides that Aladdin has proven his worth and so he will change the law allowing Jasmine to marry him. Again, the Sultan sucks at being a ruler. For the entire film, the Sultan’s biggest worry was finding someone who could marry Jasmine and rule after his death. The idea that the Sultan can change the law at his whim is scary on its own, because it means Agrabah has no systems of checks and balances. The other thing that’s disconcerting is that if the Sultan can change the law about marriage and inheritance, why doesn’t he just change the law so Jasmine can inherit the throne? Perhaps that’s too revolutionary. Or perhaps Disney is hinting that a girl who hangs out in harem pants all day isn’t fit to rule.

Maybe I’m overreacting. Maybe Aladdin is “just a Disney film for children.” The problem is other “Disney films for children” teach lessons about social responsibility and good leadership. The Beast has to be enlightened by the intellectual Belle about the qualities of kindness, loyalty and charity before he can reclaim his princely looks and status. Simba’s entire journey in The Lion King is about accepting his responsibility to oversee “The Circle of Life”. Throughout almost all of the classic Disney films, there is the implication that children need to be taught lessons about social contract theory, which is the foundation of Western democracy. Even the classic Cinderella has elements of preserving free will in the face of totalitarianism. After crooning, “A Dream Is a Wish Your Heart Makes”, Cinderella laments that even the kingdom’s clock tower orders her around, but that no one can order her to stop dreaming.

So what’s different about Aladdin? Why is it so much harder for Disney to present a story that exemplifies the values of Western social contract theory and democracy this time? The only difference between Aladdin and these other films is that it takes place in a fantasy version of the Middle East. 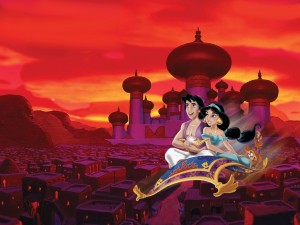 One of Aladdin’s biggest issues is that it presents the Middle East as a collection of unflattering cultural stereotypes. You could argue that these failings are a direct result of its source material. The film borrows heavily from The Thief of Baghdad, a 1940 film rife with Orientalist ideas, which in turn is cribbed from the original “Aladdin” tale in 1,001 Arabian Nights. Neither version of the story is politically correct. In the original tale, Aladdin is from a historically incorrect China and the setting for the story skips all over the known Arab world of medieval times. So you could say Disney’s hands were tied when it comes to accurately depicting a historic era while promoting modern political notions. However, there is a precedent in Middle Eastern social theory that would support Aladdin taking over the throne of Agrabah and enacting change.

In the Muqaddimah, Ibn Khaldun postulates his theories about how cities are conquered and then led into ruin. Khaldun’s work was based upon observing what had actually transpired in Middle Eastern history. He noticed a pattern where great and powerful rulers ran themselves into ruin through their own laziness and love of luxury. An outside force of rougher, rustic Bedouin leaders could easily topple the current dynasties, and then would establish a new dynasty that would ultimately (within four generations to be exact) follow the same path as the last. So, following Khaldun’s philosophy, Aladdin could have easily united the people of Agrabah against the Sultan and it would have fit in with Middle Eastern tradition.

However, this may not have made any sense to 1990’s audiences; stirrings of democracy would have looked out of place. Aladdin was hampered by the time period in which it was made. Until the past year, Western democracy hasn’t shown any signs of sticking in the Middle East (and it still might not). Looking at Aladdin through the lens of Western discomfort with Middle Eastern culture finally illuminates why Disney might have not pushed their typical “pro-Western democracy” morals. Or maybe it just never occurred to them that those values were missing. Either way, the film can now be seen as a reflection of the early 1990’s: a time when democratic values just didn’t make any sense to Western minds when set against a Middle Eastern background. If the film were made today, one has to assume that “A Whole New World” would have had a lot more loaded meaning.

[Meghan O’Keefe is a comedian and writer who lives in New York and likes pandas. Follow her on Twitter & Tumblr!] 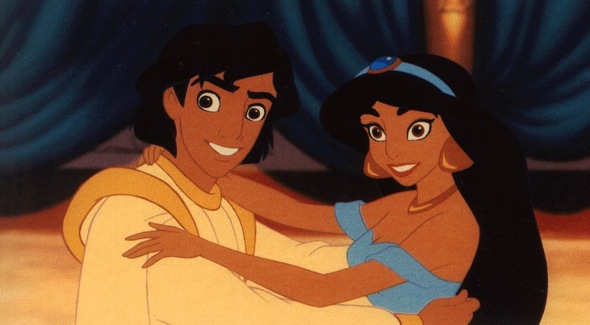 [Did Aladdin and Jasmine bring about regime change? Or do you go to war with the genie you have? Sound off in the comments! – Ed.]

15 Comments on “A New, Fantastic Point of View”