[Had enough “Lost” yet? Not until you’ve checked out this guest post by Christen Hammock! – Ed.]

Lost is kind of like “The Game.” You know, the one that you win by not thinking about it and lose by thinking about it, and now you’ve all lost by reading this sentence. It’s been awhile since you “Lost” the game though. The show ended in May, and you probably returned to your life as a spinal surgeon with your beautiful criminal girlfriend and fake adopted nephew/son. But all of a sudden, something’s not quite right. You panic, remembering your obsession, knowing that there’s got to be a literary reference or scientific principle or religious allegory that you missed.

We have to go back.

Now that we’re back on the Island, I’d like to propose a new interpretation of Lost as post-colonial literature. For those of you who don’t frequent English classes or read books about literary theory for fun (none of you? Really?), the post-colonial theory of literary criticism analyzes literature according to the cultural divisions between natives and colonists. For example, when John Smith came to America, he probably thought it was exciting and interesting and so much fun to conquer. Pocahontas is an example of post-colonial literature, because hundreds of years after the fact, we watch this movie and think, “Oh gosh! It wasn’t very nice to come in, steal their land, and ignore their religious and cultural values!” Lost doesn’t have the obvious clues of homogeneous racial groups fighting each other, but it does display themes and interactions consistent with colonialism and Orientalism. 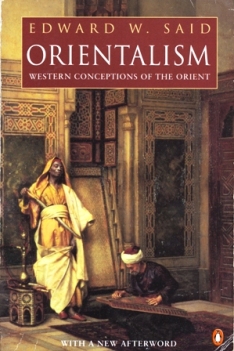 Orientalism is “a term pertaining to the Orient as. . .‘invented’ by the West” and “refers to the attitudes of the West towards the East; to the Occident (the outsiders) looking in/on/at the Orient – in fact, ‘watching’ the East and endeavoring to explain and interpret it” (Penguin Dictionary of Literary Terms and Literary Theory). It was pioneered by a Palestinian-American philosopher and literary critic named Edward Said (pronounced [sɑI – id], like “Sayid”).

I really thought I was a genius when I made this connection in the middle of an English class, but apparently my synthesis of Kipling and Lost is not original or revolutionary. The good folks at Lostpedia have already revealed this to careful readers of Sayid’s character page. They say there “may be a link,” but I think it’s an intentional, obvious reference in light of the show’s structure.

After all, the real Said and the fictional Sayid have a lot in common. They’re both from Middle Eastern countries – different Middle Eastern countries, but the difference between Palestine and Iraq is all about timing. Said was writing in the decades following the particularly rough patches of the Israeli-Palestinian conflict. If you recall, America was pretty pro-Israel at this point, so the conflict was incredibly relevant. Likewise, Sayid Jarrah is an Iraqi living in America after September 11th. Said is the pen to Sayid’s sword, but they both play a crucial role in representing America’s interactions with the Middle East. 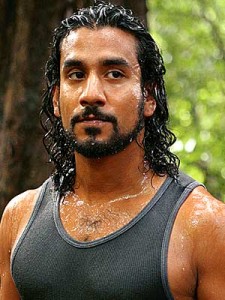 One for the ladies.

More broadly, the connection can be extrapolated to the relationship between the “East” and the “West” in history. Let’s assume that the Island is a physical representation of the relationship between West and East in the age of exploration: it is conquerable, mystical, and unknown to the survivors. The 815 crash is essentially an involuntary colonization of the Island. Although the Island is actually a time-jumping allegorical not-quite-landmass, its supposed “location” is somewhere in the Pacific Ocean, i.e. decidedly Eastern. Likewise, the airport from which 815 takes off is in Sydney, Australia, a prime example of colonized land. Conversely, the destination of flight 815 is a very Western Los Angeles. Before the plane crash, the only connection between these two diametrically opposed lands was the DHARMA Initiative, which serves as a fascinating synthesis of Eastern and Western culture. Its founding members were grad students in Michigan, but it also has European connections. Weirdly enough, the face of DHARMA is the super Asian Pierre Chang, and the word “dharma” itself refers to a principle in several Eastern religions.

This synthesis says a lot about how the island was colonized. There are four notable groups that come to the island: the 815 survivors, the DHARMA Initiative, Rousseau’s research group, and the group that brings Richard Alpert to the island. The latter groups represent old Orientalism that mostly deals with French and British colonization; Rousseau’s group is French, while the Blackrock-ers are Englishmen headed to the New World. The other two groups are primarily American, a relatively new force in the Hegemonic Empire Club. Colonial Western texts describing the East did much more to reveal the biases and mistakes of the dominant culture than to actually explain the “Orient.” Analogically, there is a definite group of Others (the original group that Jacob brought to the island, pseudo-led by Richard Alpert), but what’s important to post-colonial analysis is who the colonists (particularly our 815 survivors) perceive to be Others.

One principle of Said’s theory was that literature marks a struggle between “Us” and “Them” – those who are part of the dominant, colonizing culture and the “Others.” According to the protagonists, the “Others” is not a definite group. In fact, the determination of Otherness is entirely mutable, in terms of both individuals and groups. Not only does their bestowing of the term “Other” apply to lots of distinct groups, but certain characters oscillate between being one of “Us” and one of “Them” at a dizzying rate (think Ben and Juliet, whose statuses change nearly every episode of Seasons 3 and 4). 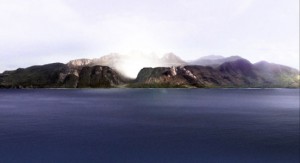 We get through the first eight episodes of Season 1 before we see interaction between the survivors and anyone else. Oddly enough, it’s Sayid who first meets Rousseau. This is an interesting reversal of colonization, as Rousseau, a Western Frenchwoman, first appears to be a native, while Sayid, an Eastern Iraqi, is a colonist. He speaks English to her, while she displays significant linguistic variation. Their distrust of the unknown, however, is mutual. Both of them are colonists of the Island, in a sense, but they don’t recognize this at first. Rousseau assumes that Sayid is an “Other,” part of the group that supposedly infected her research team. In fact, Rousseau is the one who debuts the term “Others” in the series. Conversely, Sayid doesn’t assume that Rousseau is an inhabitant, as he asks her how she came to be on the Island. After brief conversation and a little bit of torture, they realize that their situations and accompanying fears are similar. Sayid references the “Monster,” while Rousseau notes that she hears the Others whispering out in the jungle. As colonists, both of them view another presence on the Island to be mystical and dangerous, a view common to the West in surveying the East.

Said details three types of Orientalist writers: essentially, the scientist, the pilgrim, and a combination of the two. The DHARMA Initiative represents the scientific writer; they come to the Island to explain and interpret. The 815 survivors represent the pilgrim writer. They are brought to the Island to complete a spiritual journey. Even though the show seems to champion diversity, culture, and a balance of faith and science, the plot unravels in a typical dominant West comes to save the primitive East storyline. All of the Others’ leaders come from outside the Island. They live in tents until Ben helps them move into the DHARMA compound. After Ben’s transition from an Outsider to an Other, he must bring Juliet to the Island to solve the Others’ fertility problems and uses Jack to solve his own medical issues.

Ultimately, the premise of the show fits this storyline – instead of choosing someone on the Island to protect it, Jacob chooses the Western 815 survivors. The East needs help from the West to solve its scientific mysteries and protects its spiritual power. If this Western/Eastern interplay is intentional, then Lost is a far more complicated show than I thought. If it wasn’t, though, then Lost merely joins the ranks of Orientalist literature before it.

Christen Hammock is an English major at the number one party school in America, which is why she spends her weekends in the library writing articles like this one. 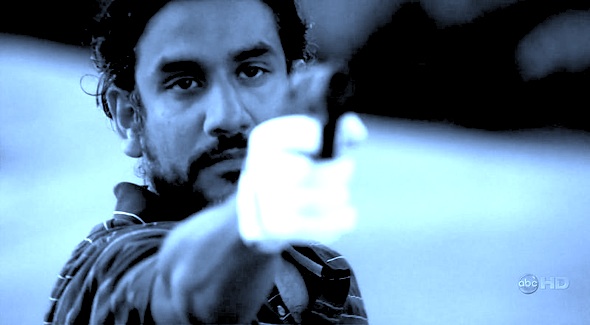 [Got any wet, shirtless pictures of Edward Said? Or want to take on the author’s thesis? Have at it in the comments!]

4 Comments on “Sa(y)id: Lost and Post-Colonialism”