[Kicking off our Disney theme week, enjoy this post by Peter Gross! – Ed.]

Disney has received a lot of abuse for its treatment of princesses in popular culture, but the company shouldn’t be held responsible for superficial conclusions drawn by shallow minds. The Disney princess films perform a deeper analysis of issues confronted by society as a whole, as can be seen in Beauty and the Beast.

Belle’s story is a tense psychological drama, following her struggle with schizophrenia while using her hallucinations as a lens through which we can examine our own ambivalence towards class conflict.

Taking Beauty and the Beast at face value is problematic; it’s the story of a girl who quickly succumbs to Stockholm syndrome, spurns the rescue efforts of an entire town that mobilized to help her, and ultimately decides to live with her captors. And it’s set in a world where powerful spellcasters mutilate hundreds of people at a time for entertainment without suffering any sort of consequences.

Look at how the candlestick Lumiere declares that they have been “rusting” for ten years while waiting for a chance to serve someone, but the prologue explains that the beast can only break his curse before his twenty-first birthday (which occurs shortly after Belle discovers his castle). The math shows that innocents have been doomed to an eternity spent as matching dinnerware because of the moral shortcomings of an eleven-year-old with no parents.

It is also odd that the Beast’s sprawling compound is less than a day’s ride from Belle’s village, yet completely unknown to the villagers. It would have required an army to build and furnish it with the carpets, tapestries, and solid gold toilet seats demanded by the nobility, and could not be done in secret. Only the dullest sort of placid, bovine incuriosity on the part of the villagers could ignore this massive undertaking in their own backyard, especially when idle gossip about local goings-on would be the sole source of entertainment for an isolated backwater like Belle’s “provincial town.”

Within the castle, servants exhibit behavior that would be troublingly co-dependent and bordering on psychosis if observed in actual humans. Lumiere moans that “life is so unnerving for a servant who’s not serving” during a musical number in which hundreds of (presumably sentient) dishes and serving vessels put on a show for an audience of one. Even when Belle’s arrival doubles the size of the castle’s aristocracy, the ratio of commoners to elites is still well above 50:1. It is difficult to say which is more unsettling: the idea that such a vast pool of labor has been helplessly idle for the ten years that their curse as been in place, or the thought that all of these servants would be on call voluntarily to indulge the ruling class at a moment’s notice.

All of these issues begin to make sense when we realize that the “enchantress” is in fact Belle’s own super-ego, attempting to show her the high moral costs of maintaining the opulent lifestyle enjoyed by the aristocracy. In order to exist comfortably within such an unfair system of wealth distribution, Belle would need to stop viewing people as human beings, deserving of rights and dignity, and instead to view them as anthropomorphic objects, visual representations of their material functions within the household. (The song “Human Again,” in which the staff reveals their desire to return to human form, was cut from the film’s theatrical release, further reinforcing the interpretation that they never were, and are never intended to be, seen as human beings.) 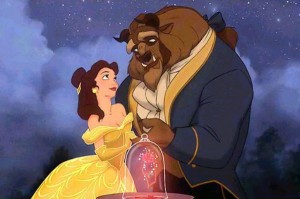 Clearly, Belle is schizophrenic, and the strain of her efforts to reconcile the ease and luxury of an aristocratic lifestyle with the oppression and social injustice required to perpetuate its existence causes her to experience increasingly vivid hallucinations. Two of the Schneiderian First-Rank Symptoms for diagnosing schizophrenia are voices heard arguing and voices commenting on one’s actions, and both are used to introduce the castle’s servants. (These voices are originally heard by Belle’s father, but because he is the gateway leading to her to experience the delusions, it is questionable whether he exists at all.) Even innocent social interactions are given potentially sinister undertones, as the opening song has the townspeople expressing concern over Belle’s well being in a way that gets interpreted as judgmental criticism — something does seem odd about Belle, but she is refusing our offer of help.

The internal struggle pitting the desire to live in a “fair” society against the aspiration to join the ranks of the super-wealthy elite is familiar to all of us, and the genius of Beauty and the Beast lies in the symbolism they have used to explore this conflict. It is no accident that the Beast has no parents and is never given a name in the movie — as the focal point of the castle’s transformation, he is more than just an individual; he is representative of the entire class system that enslaves the many for the benefit of a select few. The Beast, as well as the dark, gothic castle decorations that reflect his fearsome visage, has been given a repulsive appearance by Belle’s subconscious because of the innate unfairness of his society. However, just as we may claim to despise something that we secretly desire, Belle finds herself attracted to the potential benefits of living by his rules (no one speaks out against the feudal system when they’re wearing the crown).

Belle’s delusions also have an interesting effect on Gaston, the hero of the story. Although he is a concerned friend trying to help Belle avoid a tragic outcome, her mind ends up twisting his most noble attributes into grotesque caricatures of villainy. A careful effort must be made to separate the substance of his actions from the perceptions of his behavior. 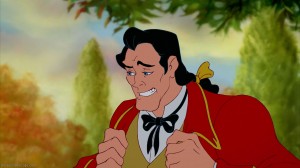 We know that Gaston is an avid conservationist because his preferred trophies (antlers) come from male deer. Without active stewardship, these animals are prone to overpopulating and becoming a nuisance, but his controlled culls of the species are made out to be indiscriminate slaughter.

We also know that Gaston supports local farming initiatives. His stated daily breakfast of five dozen eggs would seem excessive to some, but no doubt provides a steady source of income to at least one enterprising homestead. This commitment to local businesses is brushed aside as part of a regimen designed to bolster his vanity.

And Gaston’s philanthropic efforts are completely misinterpreted. After a late-night meeting with a hospital director, Gaston makes a charitable donation so that the facility can continue to treat high-risk patients who might otherwise be a danger to themselves and others. Belle interprets this as a bribe — made so that her “father” will be committed to a mental institution under false pretenses. (Belle’s notion that medical professionals could be at all swayed by base considerations such as money is also evidence of her tenuous grip on reality.)

Gaston’s growing concern for the rapidly deteriorating Belle is similarly misunderstood. In the film, he encourages her to strengthen her ties to the local community and engage with the villagers, which is the direct opposite of Belle’s imagined aristocrats who share nothing in common with the working class. There are few options available to Belle if she wishes to function in her society, and since she shows little interest in developing any marketable skills — she avoids books on science, math, or the humanities and is only shown reading, never writing her own work — the only options available to her are marriage or prostitution. By proposing marriage, Gaston is trying to save her from the tragic life of a fallen woman.

Once Gaston realizes that Belle is in danger of succumbing to her hallucinations and growing to worship an arbitrary class system where the idle rich are rewarded for a mere accident of birth (beginning to “love the Beast”), he rallies the community to stage an intervention; they set out to kill the Beast by convincing Belle that only a morally bankrupt worldview dehumanizes others for personal gain. However, once they enter her delusional world, everything goes terribly wrong.

The townspeople are assaulted by the trappings of wealth as they enter the Beast’s castle. Some of them are waylaid because they focus on individual baubles, but all are disoriented and overpowered by the knicknacks of the ruling class in the grip of a materialistic frenzy. One villager is given a makeover by the Beast’s armoire in a particularly blistering indictment of consumerism — he sees himself swathed head to toe in expensive fabrics and runs screaming from the castle after realizing what he has become.

The critique aimed at an unfair class system centered around luxury items and conspicuous consumption continues through the final showdown of the film. The Beast refuses to kill Gaston because it cannot kill him; The Beast’s society will not exist without the willing participants it has recruited with its glimpses of the opulence enjoyed by the elite. Unfortunately, Gaston doesn’t realize that he has been swept up in the materialistic frenzy of his surroundings and thinks that physical possessions are the key to achieving his goals. He becomes literally unbalanced in the pursuit of objects as he grasps for his hunting knife, falling to his doom.

Having seen the continual progression of Belle’s mental illness throughout the film, we are left questioning the castle’s final transformation. Now that she is alone and cut off from contact with the outside world, has Belle really broken the curse of an evil enchantress? Or has she reconciled her cognitive dissonance by finding a way to pretend that the Beast’s lopsided class system is normal, or even desirable?

While it is possible to take Beauty and the Beast at face value and dismiss it as part of a larger marketing apparatus promoting a materialistic worldview, doing so trivializes Belle’s struggle with mental illness. And isn’t such a shallow analysis the kind of superficiality that detractors accuse Disney of promoting, anyway?

(Peter Gross may have seen Beauty and the Beast one too many times. 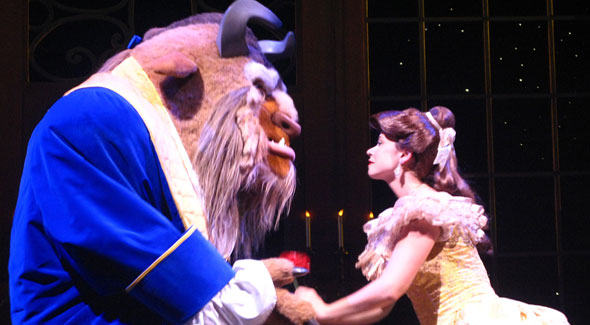 [Whaddaya think, Overthinkers? By bridging the gap between peasantry and feudal lords, did Belle invent the middle class two centuries early? Is there any hope for our heroine? Sound off in the comments! – Ed.]

23 Comments on “Beauty and the Beast’s Dark Delusion”