Hello, Overthinkers! With Perich gone on an Overthinking sabbatical in the Far East, it falls to me to resume my role as your thread opener for the week. Let’s fire up the “Entertainment” category of Google News and see what’s going on.

But I’m given to understand that the 3D re-release of The Lion King may hold the top spot at the box office. (Headline puns I’ve seen so far in my Googling: “Lion King My Top The Food Chain”; “Lion still King of the Movie Jungle”. I know you can do better. Sound off below.)

Courageous, about the spiritual struggles of four police officers, comes out in limited release (isn’t it amazing that we talk about 1,100 screens as “limited” release?), Dream House looks like—wait for it—a nightmare, and Anna Farris still hasn’t found the right vehicle for her considerable talents as a comedienne.

On the TV front, The New Girl seems to be doing really well, X Factor not so much, and Community is still kicking ass (in my humble opinion) coming back strong with a brilliant opening number in the premiere and this week an understated cameo from Martin Starr.

If you’ll indulge me, I’d like to report that my inner thirteen year old (who listened to nothing but female singer-songwriters all through the nineties) is thrilled that Tori Amos has recently released Night of Hunters, her latest album. (That’s not even an affiliate link; that’s how much I love Tori Amos. You may commence calling me names.)

But you know that, more than anything, I’m the grammar and usage nerd on OTI. So I was thrilled when a witty and instructive drawing about the Oxford comma began making the rounds of Facebook and Tumblr this week. Click through to see it, and sound off about these or any other pop culture artifacts. For this is your… Open Thread. 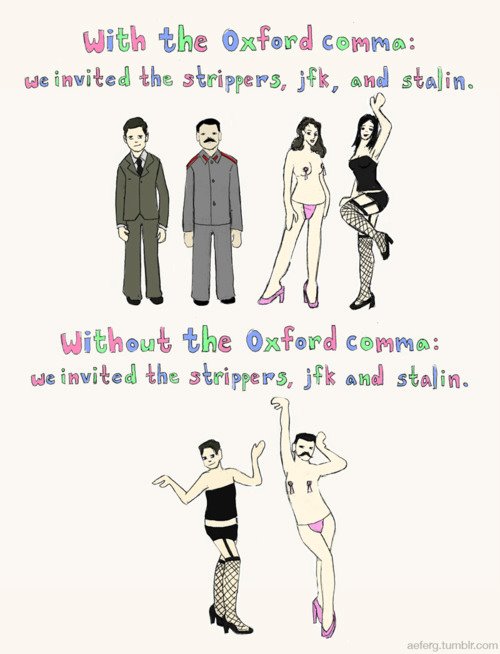