Lots of movies coming out! Maybe you’re excited about Moneyball, the smart Brad Pitt baseball drama about making baseball smarter. Or maybe your standards aren’t as high and you’d rather see Killer Elite, a throwback 80s action movie, set in the 80s, starring an 80s star – Robert deNiro – and Jason Statham and Clive Owen. Or maybe your standards are lower still and you just want to see Taylor Lautner shirtless in Abduction. In which case, let me save you the $9.50: 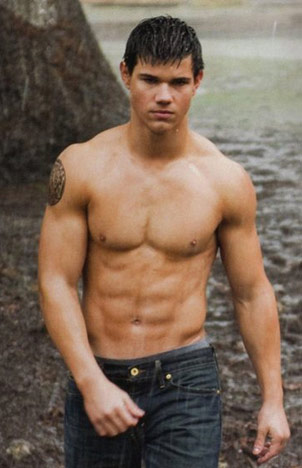 Didn't even have to search for 'Taylor Lautner shirtless.' Just his name will do.

If you stayed in to watch TV this week, you had your choice of fare. There was the season premiere of Community, fresh off their Emmy snub. Also, the networks seem to have agreed that Mad Men isn’t going anywhere, as we have two vampy Sixties throwbacks: Pan Am and The Playboy Club. And 2 Broke Girls, and The New Girl, and Whitney, and, and, and.

In music news, REM announced their breakup, thirty-one years after their debut and eleven years after people stopped listening to them. Here’s one from deep in the catalog, “Don’t Go Back to Rockville”:

Comment of the Week goes to Marc on Laughing Our Way to the Altar:

Romantic Comedies are probably my favorite genre and i’ve got free time, so i’m taking the opportunity to mouth off.

I enjoyed this article, but I think you’re missing an opportunity to go deeper with it. Specifically, I’m talking about the way that romantic comedies can use the audience’s knowledge of the end result ( monogamous relationship) to explore what forms the basis of those relationships.

Followed by what’s at least another 250 words. That’s some good Overthink, which we always like to see in our comment threads.

Has Michael Stipe discovered a way of uncovering hotter female waitresses than any other club in America, using spreadsheets and statistics? Or is there something we missed? Sound off in the comments!