On July 8, 2011, the National Aeronautics and Space Administration brought the second phase of America’s 50-year history of manned space flight to a close.  The final flight of the space shuttle left NASA incapable of putting astronauts into space, forcing them to bum rides from their old competitors, the Russians. 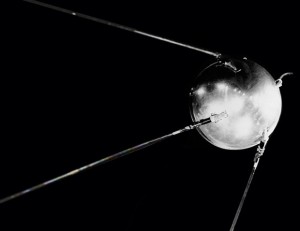 NASA recently released a new proposal to develop a new heavy-lift booster rocket that could put America back into space by the end of the decade.  The price tag, somewhere between $35 and $62 billion over the next 15 years.  According to the Wall Street Journal, White House officials are worried that Congress’s current anti-debt hysteria will make it difficult to get funding for this new endeavor passed.

NASA spending generally pays for itself a dozen times over through new technology.  It serves as a world-wide reminder that America can do great things for all mankind. It inspires new generations of scientists.  It’s generally a good idea, so yeah, Congress will probably cut it.

That’s why it’s such a shame that NASA passed up an incredible opportunity to guarantee funding.  “The biggest mistake in the history of NASA” wasn’t Bruce Willis. It happened this week in the press. 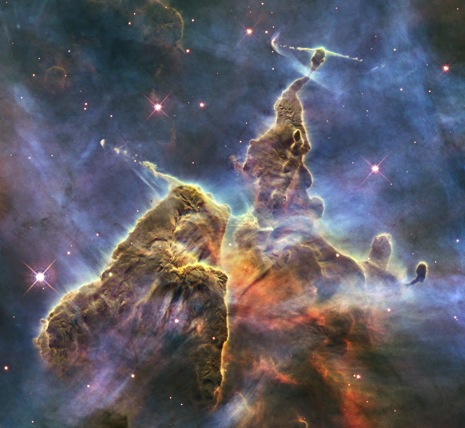 This is a Hubble telescope image of a gas cloud from the Carina Nebula. It's more than three light-years tall. I don't care what your political views are - that's cool.

Last weekend, the Weinstein Co. released Apollo 18, a “found footage” horror film most simply described as “the Blair Witch on the moon.” SPOILER ALERT  In it, moon spiders that can disguise themselves as rocks manage to kill the astronauts from our last, secret, moon shot.  According to most reviews, it’s pretty terrible.  (Rotten Tomatoes score of 18%. 4% lower than the Smurfs).  But that doesn’t matter.  What matters is the advertising.

Like the Blair Witch Project, Apollo 18 was advertised as a documentary that featured real footage of a deliberately covered-up mission.  You’d think that America would know better than to look for truth in movie trailers by now, but NASA disagrees.  In an interview with the LA Times, NASA’s Bert Ulrich made a point of saying that: “Apollo 18 is not a documentary. The film is a work of fiction, and we always knew that.”

NASA collaborates with hundreds of filmmakers every year.  They’ve partnered with Pixar to have WALL-E teach kids about space, they helped produce 1986’s Space Camp (the single greatest false advertisement ever made), and they even signed off on Transformers: Dark of the Moon, the other summer movie about aliens on the moon.

For some reason, NASA felt the need to distance themselves from Apollo 18.

Strangely, this astronaut is currently performing an extra-vehicular activity (EVA). In the next scene, they dance.

They should have admitted that the footage was real.

Imagine, for a second, America’s reaction to the news that there are murderous space spiders on the moon.  Within a week, the House Republicans would have condemned President Obama’s failure to act quickly to protect us from the space spiders.  Democrats would have countered that the spiders were discovered during the Nixon Administration.  One thing we could all agree on: let’s give NASA whatever it wants to protect us from these bastards.

The equation they forgot is one of the most basic in American politics: FEAR = FEDERAL FUNDING.  Since the tragedy of September 11, 2001, the budget for America’s intelligence services has nearly doubled to $52,000,000,000 per year.   The Homeland Security budget went from $0 in 2001 to $43,000,000,000 last year.   Some people think those expenses are justified.  Others don’t.  Regardless of your opinion, those numbers tell you that when America is afraid, we’re willing to spend.

NASA, you had a massive ad campaign telling people that you found monsters in space – the one thing that could have guaranteed your funding forever – and you shot it down.  Did not one of you read Watchmen? 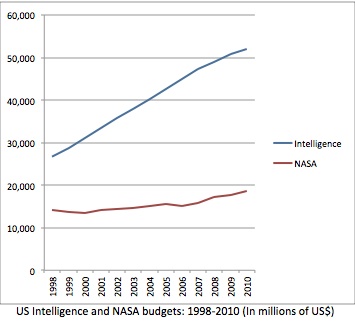 But, my friends, there’s still time.   If you didn’t lie to us once or twice before finally admitting that the  footage was real, we probably wouldn’t believe it.

Make a deal with the Weinsteins, who would love to make more than the $8.7 million they banked in opening weekend.  Get their footage transferred onto punch cards or whatever you were using in the early 70s.   Have some intern go find an old filing cabinet full of records from the early seventies.  Take a black marker and redact almost everything.  A little sheepish testimony before Congress and before you can say National Aeronautics and Space Administration, you’ll have every dollar you need to put us back in space.

Do it for America.  Do it for the future.  Do it for all the nearsighted, out-of-shape, liberal-arts majors who still believe that we’ll be astronauts one day.

27 Comments on “The Biggest Mistake in the History of NASA”