As a fundamentally interactive medium, video games use the actions of the game’s players to tell the stories of fictional agents. Every playing of a game is a new telling of the story; the next time I play Super Mario Bros., my actions will determine whether the game tells the story of the plumber who saved the princess, or the plumber who couldn’t make it past that damn trampoline in level 3-1. While there are plenty of other possible places for Mario to meet his ultimate demise, the simplicity of the game constrains the possible endings; either Mario rescues the princess, or he fails to do so. The actions taken on the path to either end have no intrinsic significance to the story playing the game tells.

In Mass Effect, you play as Commander Shepard, a human military officer in the 22nd century, after humans have learned interstellar travel. Early in the game, you discover a relic from an ancient space civilization, and the relic gives you a vision of that civilization’s destruction at the hands of an army of ancient intergalactic horrors called the Reapers. The game then details Shepard’s quest to track down an alien super-soldier who went rogue at the relic site and is trying to unleash the Reapers on the galaxy so they can destroy galactic civilization again.

[Since Shepard can be a character of either gender, the pronouns “ze” and “hir” will be used going forward. – Ed.]

Clearly, Mass Effect has a much more complicated story than Mario. Since Mass Effect is was released a full 22 years after the first Super Mario Bros., this is unsurprising to say the least. But there is a very real sense in which the storytelling possibilities in Mass Effect are more rigidly fixed. The final outcome of your decisions is imposed upon you regardless of the content of your actions. The player can choose Shepard’s gender and skills, but can never at any point choose to pursue another goal. Ze can’t decide Shepard is sick of military life and retire to the French countryside to start up a vineyard, or go back to school for a Ph.D., or do anything except try to save the galaxy. Sure, there are side quests, and you can choose when to do the main quests, but all roads ultimately lead to the same endpoint. This is a nearly universal feature of video game storytelling, and is commonly referred to as railroading. 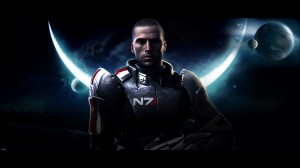 The thing about this instance of railroading, however, is that it betrays an imperialistic imposition of truth that is reflected in the game’s story itself. You are not given any choice as to the degree of reality Shepard ascribes to the vision. The player cannot decide that Shepard believes the vision represents something other than a true omen of doom for galactic civilization. You are then forced to speak before a powerful council of aliens fittingly referred to as The Council, and argue that the rogue agent has betrayed the Council and gone rogue in order to bring about the Reaper invasion, using only the vision as evidence. This ends, predictably enough, with the Council refusing your request and thus casting them into a primarily oppositional light for the rest of the game as an obstacle to be overcome, concerned more (in the game’s internal logic) with protecting its own interests than acting on the truth.

The idea is that because the vision is a true portent of bad things to come, the Council was foolish in denying your request and therefore cannot be trusted. But see, here’s the thing. The Council was completely justified and correct in denying Shepard’s request, regardless of the actual truth of the evidence. Visions aren’t just bad evidence, they’re barely evidence at all. The need for political leaders to act only on good evidence is obvious, as several recent wars might indicate. 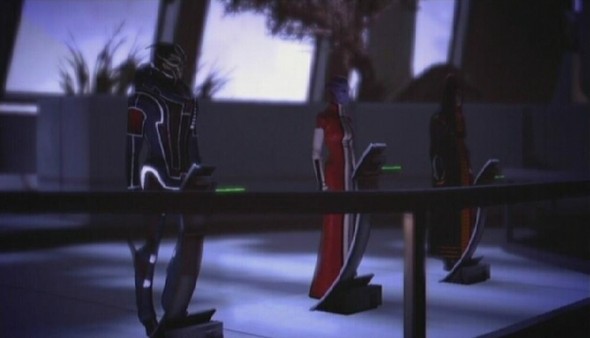 We do not find these allegations of 'yellow cake Geth' compelling, Councillor Powell.

However, in presenting this denial as an act of obstruction, the game unilaterally declares it’s own notion of ‘truth’ as the ultimate arbiter of what constitutes proper action and thus imposes universally over all the game’s agents, even the ones whose actions the player cannot control, a system of morality. This is how the game gives its own railroading force. Due to the absolute nature of the metaphysics of its morals, and given Shepard’s nature as the primary moral agent through which the player acts, the game places a moral imperative on Shepard so absolute that even the player, who exists outside the game and therefore does not share this imperative, cannot make Shepard defy it, or even make Shepard question hir conviction.

However, the game does give the player a system of moral choice in the form of the game’s Paragon/Renegade system. Under this system, after making certain dialogue decisions or taking certain actions, Shepard is awarded either ‘Paragon points’ or ‘Renegade points’ depending on the action taken. While the points are awarded on separate scales and not mutually exclusive (that is, gaining points of one type does not result in losing points of the other), and many decisions and actions award no points at all, the idea is that by the end of the game Shepard will be more of a ‘Paragon’, that is, a relatively Superman-esque character, or ‘Renegade’, a character more akin to darker versions of Batman. 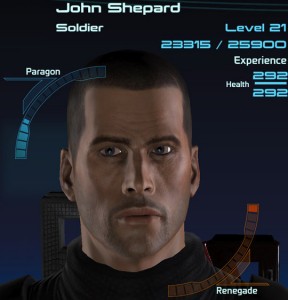 An angel on one shoulder, a devil on the other.

The points are awarded in a fairly principled way. Paragon points are awarded for actions that display tolerance of non-human species, and are generally diplomatic. Renegade points are awarded for displays of excessive violence, xenophobia, and intimidation. Playing the game adhering to either archetype does provide a different gaming experience at several points. Certain characters will react differently to Shepard’s presence. Some of the major game decisions have broad consequences for individuals, societies, and even species. Therefore, this system seems to represent a robust system of moral choice where actions have an intrinsic importance not seen in Mario; the player has a real influence over Shepard’s actions and thus tells different stories with different playthroughs, like Mario.

This is true to an extent. However, the final outcome of your actions remains essentially the same regardless of the archetype adhered to. A Paragon or Renegade Shepard will still violently take the lives of hundreds of organic and non-organic life forms, and will only be allowed to resolve disputes non-violently in rare, pre-ordained situations. Unlike Mario, absolute failure internal to the game is impossible. You can run out of lives in Mario. You can save, load, and die as many times as you like in Mass Effect. The only way to fail forever in Mass Effect is to quit playing forever before finishing, a decision external to the game itself. Play until the end of the game, and Shepard will kill the bad guy and save the galaxy…for now. Making different decisions in different playthroughs, then, is rather analogous to doing the same Mad Lib multiple times using different words each time. In both cases, the degree to which these changes represent substantive differences in the nature of the story is debatable, at best.

Furthermore, this system is fully subsumed by the same absolute metaphysics of morals. What ultimately constitutes a Paragon or Renegade action is fixed; the player cannot argue with the game about what points were awarded and why. Certain actions award certain points, and that is that. From the perspective of the game, there is never any ambiguity as to what type of points to award, even when the actions themselves are morally ambiguous. In the same way the necessity and ultimate outcome of Shepard’s actions is absolute, so too is the moral character of those actions, at least as far as the game is concerned.

This forcing of fixed moral truths upon others is, in many ways, the defining trait of imperialism. European colonials oppressed millions and turned many cultures into subjugated peoples in order to Christianize them and impose their morality and way of life. Now in hindsight, European colonialism was obviously a very bad thing. Not only did the colonialist oppressors do horrible things to their subjects, the fundamental ignorance and unilateralism of their decisions has created broad consequences for modern geopolitics.

Current disputes in the Middle East, Africa, and South America can in many cases be traced back directly to colonialist actions. The end result of this system is that everyone within it, and in the case of Mass Effect, even the player outside it, must bend to the system’s will. The forces working to ensure that Shepard must save the galaxy from the Reapers are ultimately, in principle, the same forces that worked to ensure George Orwell had to go shoot an elephant in heat while stationed in Burma. The judgments of ‘Paragon’ and ‘Renegade’ are as rigid as the judgments of ‘savage’ and ‘civilized’.

I had halted on the road. As soon as I saw the elephant I knew with perfect certainty that I ought not to shoot him. It is a serious matter to shoot a working elephant – it is comparable to destroying a huge and costly piece of machinery – and obviously one ought not to do it if it can possibly be avoided. And at that distance, peacefully eating, the elephant looked no more dangerous than a cow. I thought then and I think now that his attack of “must” was already passing off; in which case he would merely wander harmlessly about until the mahout came back and caught him. Moreover, I did not in the least want to shoot him. I decided that I would watch him for a little while to make sure that he did not turn savage again, and then go home.

But at that moment I glanced round at the crowd that had followed me. It was an immense crowd, two thousand at the least and growing every minute. It blocked the road for a long distance on either side. I looked at the sea of yellow faces above the garish clothes-faces all happy and excited over this bit of fun, all certain that the elephant was going to be shot. They were watching me as they would watch a conjurer about to perform a trick. They did not like me, but with the magical rifle in my hands I was momentarily worth watching. And suddenly I realized that I should have to shoot the elephant after all. The people expected it of me and I had got to do it; I could feel their two thousand wills pressing me forward, irresistibly.

And it was at this moment, as I stood there with the rifle in my hands, that I first grasped the hollowness, the futility of the white man’s dominion in the East.

But in Mass Effect, this imposition leads to positive consequences. The good guys win and everything is cool, even in a universe that judges moral agents against its absolute and unwavering conception of moral truth. At the end of Mass Effect, triumphant music swells while the image of Shepard is nearly deified against a background of sunlight bursting over a planet’s edge. The final reward the player has sought all game is a representation of domination. Given the degree to which the game forces the player to accept its moral imperative, is this really a surprise?

Rob Mackie lives in Chicago, and has about 5 unfinished short stories in the pipeline. 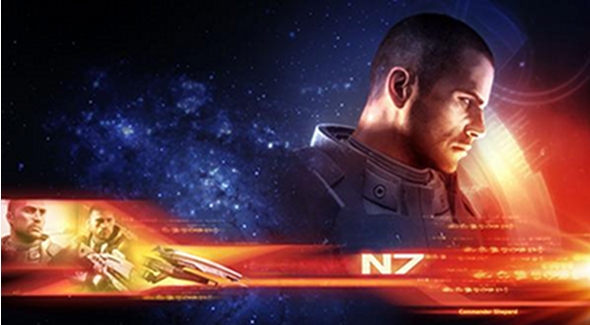 [As a fan of the Mass Effect series myself, I wonder how the overarching metaplot fits into this interpretation. Does the backstory behind the true nature of the Reapers say something similar to what Orwell does about the ultimate fate of all empires? Sound off in the comments! —JP]

24 Comments on “Commander Shepard and the Effective Agenda”