[In honor of this the release this past weekend of Woody Allen’s latest, enjoy this guest post from Trevor Seigler—an appreication of Annie Hall by way of advice to the Allen neophyte. —Ed.] 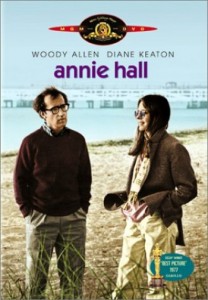 If someone were to ask me what Woody Allen movie would be the best for them to view, seeing as they’d never seen a Woody film before, my answer would be obvious: “Manhattan.” Or “Sleeper,” or maybe “Love & Death,” “Hannah and Her Sisters,” “Crimes and Misdemeanors,” “Manhattan Murder Mystery” (one of my first Allen viewing experiences and a sentimental favorite), but never the film that he’s best known for, the acknowledged masterpiece. No, for the first-time viewer I would advise that they steer clear of “Annie Hall.”

Hey, it’s my call to make, after all.

Not that “Annie Hall” isn’t a good movie; it’s a great movie, definitely one of the best American films to win the Best Picture Oscar. (Admit it, a lot of Best Pictures aren’t really the best of their respective year. A lot of politics goes into the voting.) And it’s truly Allen’s masterpiece, caught on the edge between his early slapstick and later Bergman-esque austerity. It’s definitely one of the must-see films.

But not right away. Not if you’re a newbie to the whole Woody Allen experience.

There’s a lot for the film to live up to, and live down: it’s the last real comedy to win a best picture Oscar, beating out “Star Wars” for the honor in 1977. It marks the beginning of Woody Allen’s “mature” phase, the one in which he went from being just a funny guy directing his own movies to a funny guy directing his own serious, world-class films. That’s an important distinction to make in this case; a pre-“Annie Hall” Allen wouldn’t have been able to get away with his next film, 1978’s “Interiors” (and indeed, he didn’t get away with it; commercially it was a flop, but he wouldn’t have had the leverage to make a serious film without his success with “Annie”), and the melding of more dramatic elements into ostensibly funny films like “The Purple Rose of Cairo,” “Hannah,” or “Crimes” would not have been possible, or at least commercially viable.

As an appreciative audience member for all the arts, be it music, film, or literature, I tend to gravitate to the lesser-known works of a particular artist as a means of introducing myself to his or her work. It’s the contrarian in me to seek out the book by Aldous Huxley that isn’t “Brave New World” or the Kubrick heist movie “The Killing” as, if not the first experience, the more fulfilling way of accessing an artist’s ability to strike a nerve with something that’s not as well-known.

Part of it is a result of my love of obscure British bands from the Eighties (or at least those bands that were obscure to my peers in backwoods South Carolina when I was a teenager; I saw the best minds of my generation destroyed by “Saved By the Bell: The College Years”), the thrill of first discovery of something that you’re sure no one in your social circle has heard of. In the age of Wikipedia, that’s becoming rarer to achieve; when you can Google anyone even remotely notable and have their life spanned out on a website within seconds, it’s just not the same.

“Annie Hall,” the pinnacle of Allen’s career and one of the two or three genuine masterpieces of the romantic comedy genre (it’s the intellectual chick flick, as concerned with mortality as it is with the meet-cute), is not the ideal first-time experience. It’s a dense, multilayered epic of romantic yearning and intellectual playacting. High art and low meet in an easy marriage that blends Disney animation and late Seventies lifestyle choices seamlessly and gets in most of Woody’s big obsessions (death, California, anti-Semitism, lust, romance, and Bergman). The shifting timeline of the film, back and forth between the present, past, and future, is a lot to deal with in what is ostensibly a rom-com (the other successful example of this, post-Tarantino, is “(500) Days of Summer”). It’s a “comedy” that’s much deeper than the genre tag denotes. It’s the work of an artist truly finding his voice, and that’s just exciting. But sometimes in order to appreciate the value of that kind of achievement, you have to muddle through the also-rans, the rough drafts, the “not quite there yet, but close” examples in a body of work.

Maybe I’m wrong, maybe people should start with “Annie Hall” and work their way through the filmography afterwards. Trust me, you got a lot to get through; Woody and Goddard seem to have this running battle to see who can release more movies before either expires. But I feel the way I feel, and I would like to think that I’ve backed that up in the previous paragraphs. I can’t just pull Marshall McLuhan out to make my point for me, however. Imagine how much easier life would be if you could do that…

Support Overthinking It when you buy Annie Hall

or anything by Woody Allen

What’s your favorite Woody Allen movie? Or what greatest-hit classic film do you wish the uninitiated would stay away from? Sound off in the comments.