I’ve seen Terminator 2 probably a couple dozen times. The original Terminator, not quite so many times. So when I saw it for the first time in a while this past weekend, my neural net processor was working in overdrive to find new insights into this film. Here are a few of them:

1) The One That Got Away 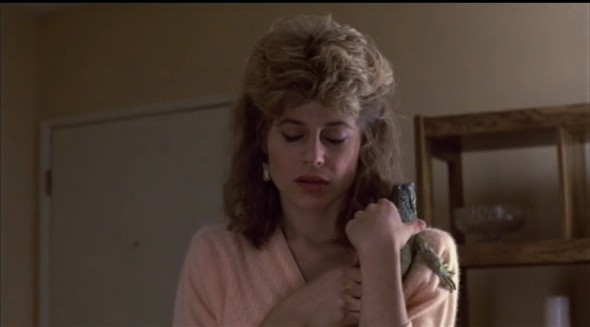 The iguana actually traveled through time to be with Sarah Connor, too.

Remember this sequence of events in the first act of the movie? Sarah Connor is primping for her date on that fateful Friday night in May 1984 when she gets a message from her suitor who has cancelled at the last minute. Disappointed, Sarah goes out on the town by herself, first to a pizza restaurant, then to the Tech-Noir club where she is attacked by the Terminator and saved by Kyle Reese. The rest is history (or at least one timeline’s version of history which may or may not exist depending on which theory of time travel and timeline continuity you subscribe to arghmybrainasploeded).

Have you ever thought about who that guy was, why he stood up Sarah Connor, and what happened to him? All we know about him is that he drives a Porsche. We don’t know if he was a friend of Sarah’s roommate, some guy that her mom set her up with, or anything that indicates the extent to which Sarah was involved with this guy.

But we do know that the media was all over Sarah’s story, given the attention they were paying to the previous two Sarah Connors that had been killed the day before. After an insane shootout at a police station, multiple pipe bombs being tossed on an LA freeway, and a huge gas tanker exploding outside a factory, it’s pretty safe to assume that her face was all over TV the next day. And we can stand to assume that asshole Porsche guy who stood up Sarah Connor heard the news.

What do you think his reaction was? Did he feel guilty that he stood her up and possibly caused her to go wherever it was that got her into trouble? Or maybe he was relieved that he wasn’t around when that crazy Connor Serial Killer tried to gun her down. Either way, he surely took note, and it was probably the strangest thing that happened to him that week, month, maybe even year. 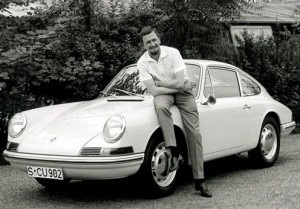 I mean, the guy drives a Porsche. C'mon.

But eventually he would forget about Sarah Connor as she went off the grid. But sometime in the late 80’s or early 90’s, her name would have resurface in the news after she was arrested for trying to blow up a computer factory. “Sarah Connor…she turned out to be a crazy terrorist. I guess I dodged a bullet back in ’84,” he would have thought to himself. Then, a few years later, after Connor escaped from Pescadero and blew up Cyberdyne, her name would have again appeared in the news, and he would have again thought to himself, “Whoa. Sarah Freaking Connor. To think that I was supposed to go on a date with her back in ’84. I mean, she is seriously a piece of work.”

Eventually he would forget about Sarah Connor again, as she again went off the grid. Judgment Day would come eventually. Would he have survived? Probably not; given that he drove a Porsche and lived in Southern California, his survival instincts and paranoia were probably not as strong as, say, a guy who drove a Bronco and lived in Montana.

But maybe he survived? If he did, he probably didn’t live too long in the post-Judgment Day world. But maybe he became a resistance fighter? If he did, he probably would have found out that John Connor’s mom was Sarah Connor, the girl he stood up  all those years ago. Although he knows that things managed to work out in the end, he can’t help but feel guilty and offers to make it up to Sarah (I know, she dies in the Terminator 3 continuity, but multiple timelines, blah blah blah. Bear with me.) In 2029, the two of them are approaching old age. Kyle Reese went back in time, and besides, he isn’t exactly Sarah’s peer. The two of them watch an 80’s movie on their nostalgic make-up date (perhaps Sixteen Candles? It was new in theaters in May 1984, so the timing works), hit it off, and start a post-apocalyptic romance in the twilight of their years.

Hey, it could happen. No fate but what we make for ourselves…in our fan fiction. 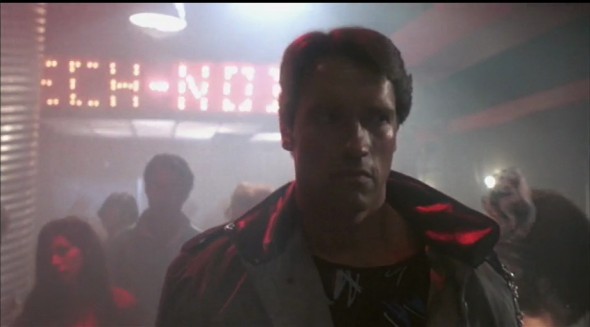 When you're a cyborg, you don't have to pay the cover charge.

In the “Tech-Noir” night club (an awesome name, by the way), we hear a jamming 80’s rock song, “Burnin’ in the Third Degree” by Tahnee Cain & The Tryanglz:

(Note: the internets don’t tell me if this song was written for the movie or if it had a separate life as a pop song apart from this movie. If you know more, tell me in the comments).

And it’s pretty obvious that the patrons are dancing to this song. In other words, this is a piece of “diagetic” music; i.e., it’s playing “in the scene” and the characters can hear the same song we’re hearing.

So why does the music stop playing when the gunfight breaks out? 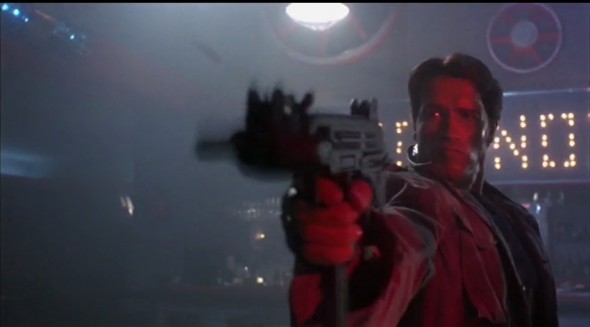 This whole article was actually just an excuse for me to take sweet screenshots from "The Terminator." You're welcome.

If you watch the scene and listen carefully (sorry, YouTube embeds are disabled for all the clips from this scene), you’ll notice that the song “Burnin’ in the Third Degree” gets progressively washed out while Brad Fiedel’s score increases in intensity as the Terminator lines up his shot. All music stops while the gunshots ring out.

What happened here? There’s no band visible, so we can assume that the music is coming from a prerecorded source. After I realized this, I was puzzled at first. Did the DJ stop the music on his way out the door? Did James Cameron choose to ignore this detail and just stop the music for aesthetic purposes, hoping no one would notice? A likely explanation, as he probably wasn’t cutting the movie to satisfy film geeks’ twelfth viewing of the film.

Then a perfectly logical explanation hit me. It’s not strange at all that the music stops. A lot of bullets tore up that club, so it’s totally possible that the sound system was put out of commission fairly quickly. And even if it somehow managed to escape the chaos, it’s likely that the DJ, or someone else, knocked the turntable arm off the record while running out of the club.

Phew! Plot hole, consider yourself nicely closed up. It’s a good thing we figured that one out. The rest of the movie is airtight, after all. Especially the time travel part. 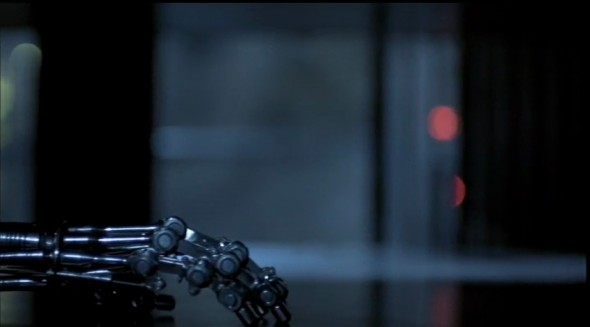 I have seen this movie way. too. many. times.

[Spoiler alert for Terminator, though I doubt you haven’t seen the movie if you’ve read this far.]

In the final confrontation, the tenacious Terminator doggedly pursues Sarah Connor by pulling its legless torso along the ground with one metal arm.

I realized that there’s a serious problem with this method of self-propulsion. Namely, a metal hand has no way of gripping a smooth metal surface. As far as I can tell–and believe me, I’ve spent a lot of time looking at metal Terminator hands–there are no grippy contacts on the tips of the endoskeleton hand. This should be of no surprise. After all, Skynet designed the hand as something that only needs to function underneath living tissue, which provides all the gripping a Terminator could possibly want.

If we follow this line of Overthought to its totally unnecessary conclusion, then we must consider the far more realistic yet less effective ending to The Terminator: instead of pursuing Sarah Connor with its freaky metal claw, the Terminator would actually be left helplessly pawing in place along the smooth metal surface of the compactor machine. Sarah Connor would then be able to calmly work the controls to crush the Terminator, rather than dramatically reaching for the button while the metal arm tries to choke her.

Perhaps she stops to laugh at the irony of the unstoppable killing machine thwarted by its own lack of understanding of friction. Maybe she watches it do this for a solid five minutes before crushing it, just to mess with the Terminator. She’s had a long day, after all, and could use some comic relief.