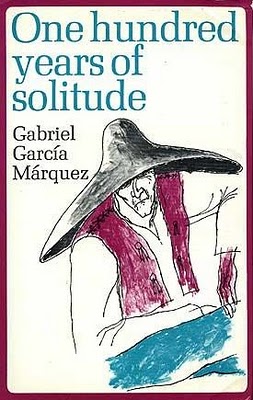 I google image searched this. This man's sombrero is sad because of magical realism.

I looked this up on Wikipedia, and this is what it said:

One Hundred Years of Solitude (Spanish: Cien años de soledad, 1967), by Gabriel García Márquez, is a novel which tells the multi-generational story of the Buendía Family, whose patriarch, José Arcadio Buendía, founds the town of Macondo, the metaphoric Colombia. The non-linear story is narrated via different time frames, a technique derived from the Argentine writer Jorge Luis Borges (as in The Garden of Forking Paths).

The widely acclaimed story, considered to be the author’s masterpiece, was first published in Spanish in 1967, and subsequently has been translated into thirty-seven languages, selling more than 20 million copies.[1][2] The magical realist style and thematic substance of One Hundred Years of Solitude established it as an important, representative novel of the literary Latin American Boom of the 1960s and 1970s,[3] that was stylistically influenced by Modernism (European and North American), and the Cuban Vanguardia (Vanguard) literary movement.

These are only some of the reasons why Gabriel Garcia Marquez’s’ One Hundred Years of Solitude is a book about the multi-generational story of the Buendía Family, whose patriarch José Arcadio Buendía, founds the town of Macondo, the metaphoric Colombia. It is also about the human spirit.

9 Comments on “Underthinking It: Gabriel Garcia Marquez’s One Hundred Years of Solitude”