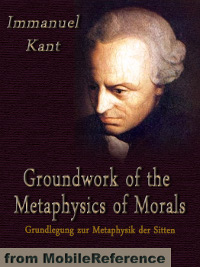 I mean, look at that dude. Totally sweet wig.

The coolest thing about this book by Immanuel Kant is that when you are a kid they teach you that there was a time once when everybody wore powdered wigs, and everybody you learn about from that time was either on the British side or the American side of the American Revolution. Except some of them were French, but they were on America’s side because of Ben Franklin.

Then, when you get to college, you learn that there is this other guy who is not English or American, and probably not French, who also either wore a wig or just had hair like that, and he wrote crazy books. Like, books that don’t make any sense at all, like you can’t even read them, and it’s not like they’re in French or anything (he’s not French, as I said already, I think).

This is cool because when you are a kid you sometimes think you’ve already learned everything cool, and then when you grow up you only learn things that are boring. Like, how when you were a kid there were cool codes in video games, but now we have walkthroughs for whole games, or the way to have infinite lives is just to select it on the difficulty level screen, which while kind of fun to be able to do, isn’t very cool at all.

So it is cool that there were other people with wigs and that they were crazy. This book is about the categorical imperative.

8 Comments on “Underthinking It: Immanuel Kant’s Groundwork of the Metaphysics of Morals”