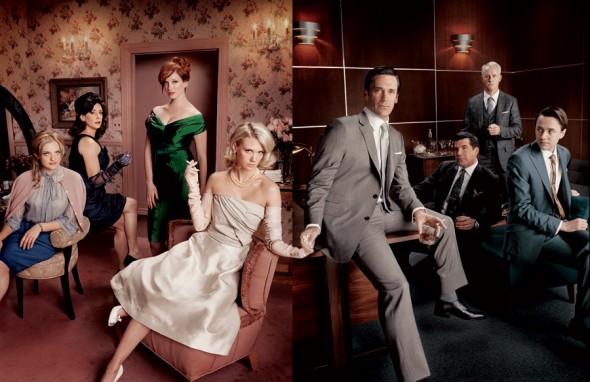 [Overthunk is a new series where OTI writers give short, unstructured thoughts about a piece of pop culture. They’re not meant to be as deep as a typical article. Use them as a springboard for further discussion in the comments below]

Millions of hipsters cried out in terror and were suddenly silenced with this week’s announcement that Mad Men’s fifth season would not air earlier than 2012. While S5 has been greenlit, the proximate cause seems to be a dispute between producer Matthew Weiner and the network. The network wants two minutes of airtime cut for commercials, more product placement, and a couple of cast regulars axed to save on budget. Weiner wants none of these things.

The economics of producing a critical darling are always tricky, and we strive to remain impartial on this dispute. But, in my opinion, a few more commercials wouldn’t kill the show. And a truly talented writer could still write Mad Men with two fewer regular cast members, provided you didn’t cut the wrong two.

So that got me to thinking. What would have to happen to ruin Mad Men? What future developments should we steel ourselves against? What would it take for Mad Men to jump the shark?

Not that murder isn’t a way to add drama to a series. Hell, you can spin an entire season off it. Hiding the body. Covering for the dead person’s absence. Someone finds out. The pressure builds … and so forth. The problem’s not that murder isn’t dramatic. The problem is that it’s an easy way of adding drama. At this point, why go to AMC when you can get the same thing on ABC? (oh snap)

I don’t think Weiner’s likely to go this way. But let’s just hope Peggy doesn’t reject Duck’s drunken advances by pushing him off a building or something.

I Have A Dream

Though set in the Sixties, Mad Men has always been less about the Sixties than about the people in it. The major historical events – Kennedy’s election, the assassination of Malcolm X – have all happened off-camera. Even the JFK assassination episode in S3 was more about people’s reaction to his assassination than the actual event. This level of subtle character drama has worked well for the series. Breaking it by thrusting the cast into the midst of historical events would be terrible. Peggy being in Austin during Charles Whitman’s clock tower sniping spree, or Pete being at the Stonewall Riots, or Don stumbling into the Abbey Road studios while the Beatles are recording Sgt. Pepper … all of those would ring phony.

Everything Old is New Again

When the well is dry, there’s always a temptation to go back for old material. The writers have managed to avoid it so far, but there are still places they could stray. With Don getting remarried, there’s the question of how he’ll keep his past hidden from Megan, and what she’ll do if she finds out. Another angry confrontation? Another six weeks of cold alienation, followed by divorce? And if Roger and Joan become a couple again, I’m turning off the TV. 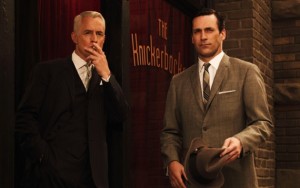 Hit Over the Head With a Suitcase

The relationship between Don and Peggy reached its peak in “The Suitcase,” with two people of different social strata finally saying what they meant instead of circling around their feelings. The resulting confrontation, confession and reconciliation resulted in what was perhaps Mad Men‘s best season yet. It also confirmed that Don and Peggy should never sleep together. Don seduces women by projecting an air of mystery; Peggy goes out with guys because she’s still discovering herself. There’s that element of the unknown in each of their love lives – and Don and Peggy know each other too well. Throwing Don and Peggy in bed together would be a lazy way of generating drama. It doesn’t seem likely, but weirder things have happened.

Breaking Up the Holy Trinity

Ultimately, Mad Men is about three people: Don Draper, Pete Campbell and Peggy Olson. Don Draper is the generation in decline – the stiff, private men who know everything about how the world works but nothing about what it means. Pete and Peggy are the generation replacing him. They can (and do) go in two different directions: either relying on traditional roles and family wealth (Campbell) or forging a new identity in uncertain times (Olson).

Lose any one of them and suddenly it’s a vastly different show. I think the show could go on with one of them leaving (although I don’t think anyone would tune in if Jon Hamm quit). But it would be a definitive new chapter in the show’s history.

We’re fortunate that Mad Men is such a good show that all of the above seem highly unlikely. But the history of pop culture is full of good shows that toyed with the formulas that made them work. Past performance is no guarantee of future success, as your investment adviser will tell you.

Is there anything else Mad Men needs to avoid in order to stay strong?

One Comment on “Overthunk: Five Ways Mad Men Could Jump the Shark”