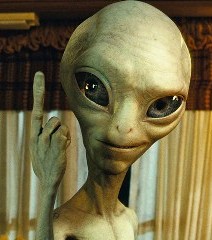 Is he giving us the finger in his culture?

[Blanket spoiler alert for the movie Paul. And for the New Testament.]

After the sci-fi road comedy Paul opened last week, some saw in it a strong advocacy for, of all things, atheism. Jesse Taylor of Pandagon called it “the most openly pro-atheist movie I’ve ever seen.” The Catholic News Service decried its “militant atheism” and its “explicit rejection of Christian faith and morals.”

Lord, have mercy. Why does this little stoner alien have these commenters so worked up? Paul does more than just make alien probe jokes while he runs from government agents and tries to get back to his spaceship. He also shatters the worldview of a fundamentalist Christian (Kristen Wiig’s character) and makes cutting remarks against religion and faith in general along the way.

Both of the above commenters are probably reading too much into his seemingly pro-atheist commentary, mostly because the targets of the satire are clearly on the lunatic fringe of American Christianity. I mean, you can’t take a character wearing an “Evolve This” t-shirt depicting God shooting Darwin with a gun as a stand-in for mainstream religion: 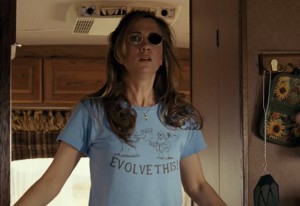 I mean, I guess you could, but that would be totally underthinking it.

Nevertheless, it’s still notable the extent to which religion plays a significant role in this film. Most sci-fi stories skirt the issue entirely (does anyone in Star Trek ever go to church?), but this one spends significant time exploring the topic.

So it shouldn’t surprise you that a movie called Paul in which the characters struggle with Christianity actually borrows heavily from the Apostle Paul and his story. 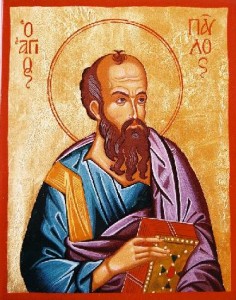 What’s that? You are surprised? Well, it’s a good thing I wrote this article to explain what, exactly, those connections are and to explore the extent to which Paul is or isn’t “anti-Christian” or “pro-atheist.”

Let’s start with the name itself. Nick Frost and Simon Pegg, who wrote the movie in addition to starring in it, could just as easily have named the alien “Frank,” “Chad,” or something else that Anglophone audiences typically associate with slackers and stoners. But they chose a biblical name instead. Many Christians attach great significance to names and whether or not they’re from the Bible (hence the existence of christianbabynamesandmeanings.com) precisely because they want people to make a subconscious distinction between a person with a biblical name and their counterpart in the scriptures.

Also, it helps that the name “Paul” roughly translates to “small” in Latin. (Thanks, christianbabynamesandmeanings.com)

Not an advertisement. Just an illustration.

But enough riffing on the name. Let’s get into the Text with a capital T, shall we? 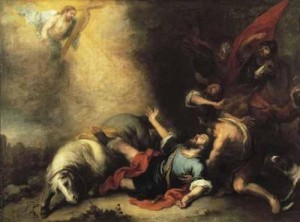 "A funny thing happened on my way to Damascus." Acts 9:1

The one thing most people know about Paul is that he underwent a dramatic conversion to Christianity after making a career of persecuting Christians. God revealed himself to Paul on the road to Damascus and, in a flash, turned him from a hater in to a player. This act of radical transformation is essential to his identity; it shows that God works through atypical agents, and it shows that no one is beyond the point of saving and redemption.

Given this context, let’s examine the events of the movie Paul. Although we don’t see it happen on-screen, the alien Paul goes through a radical conversion after arriving on this planet. He goes from the ultimate outsider–a literal alien–to pot-smoking, R&B jammin’, cool-guy insider sometime in between crash-landing in 1947 and meeting Pegg and Frost in 2009.

But since we don’t see Paul’s conversion, we take for granted his status as a fully acculturated alien-turned-resident. We do, however, witness the Kristen Wiig character’s conversion, which is by far the most interesting and direct connection to the story of the Apostle Paul in this movie.

This is how the “conversion” goes down. Pegg, Frost, and Paul meet Wiig at an RV camper facility run by Wiig’s redneck father, also a devout fundamentalist Christian. Wiig steps into the RV and questions Pegg and Frost on their faith. Upon hearing of their lack thereof, Wiig begins to lecture them on how we’re all created in God’s image. Paul overhears all of this while hiding and out of frustration reveals himself to Wiig, who promptly faints. This is only the first part of her dramatic conversion; after she wakes up, she alternately refuses to believe that Paul is real and accuses him of being a demon. Paul responds by telepathically sharing his knowledge of the universe and science to Wiig, and at that moment, she experiences conversion from fundamentalist devotion to secularism. She then spends the rest of the movie hurling curse words and contemplating how to “fornicate freely.” Granted, she stops short of proselytizing her newfound “faith” with the zeal of the Apostle Paul, but her transformation is just as complete as both the alien and the apostle. 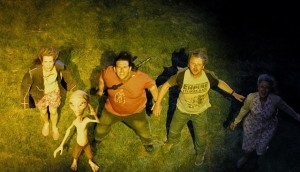 "After he said this, he was taken up before their very eyes, and a cloud hid him from their sight." -Acts 1:9

It’s an interesting subversion of the apostle’s story, but one that ultimately leads to similar outcomes. Wiig escapes from a destructive past life of ignorance, “persecuting” those that don’t share her beliefs, to embracing those same people and leading them to salvation–in this case, Paul’s escape from Earth and Pegg & Frost’s attainment of success in their science fiction comic book careers. Just like Acts and Paul’s Letters…except with less Jesus and God in the mix.

So, about this act of subversion. Sure, it’s a reversal on one hand, but on the other hand it remains true to a lot of the essentials of the original. Fans of previous Pegg/Frost movies should be having an “ah-ha” moment about now, so in case you’re not in that category, allow me to explain: 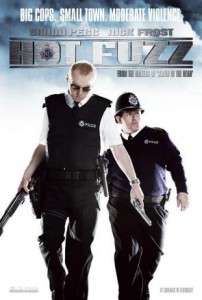 "And I will strike down upon thee with great vengeance and furious anger"....oh, sorry, wrong movie.

Shawn of the Dead: clever parody of zombie movies that both lampoons many of the genre’s conventions yet stays true to the social commentary through use of gore and violence that defines the genre.

Hot Fuzz: clever parody of American cop movies that both lampoons many of the genre’s conventions yet stays true to the portrayal of heroism through use of fetishized gun violence that defines the genre.

Paul: clever parody of the New Testament that…

OK, you get the point, right? Paul, Shaun of the Dead, and Hot Fuzz all have fun at the expense of their source material, yet never full deviate from the spirit of the source material. Which is important when we consider the perceived pro-atheism or anti-Christianity of Paul. My whole point with drawing these parallels between the Apostle Paul’s conversion and Wiig’s conversion is that even though this part of the story appears on the surface to be a repudiation of Christianity, it retains enough of the original spirit that it in a small way validates Christianity.

Even Paul’s pseudo-scientific “healing” powers, which could be construed as pro-secular digs at Christianity, help bolster this argument that the movie isn’t entirely rejecting Christianity. For those that haven’t seen the movie, the alien Paul uses his healing powers to resurrect a dead bird (before eating it to great comedic effect), heal Wiig’s long-deformed eye (yup, sight to the blind), and finally, to save Pegg’s life after he takes a shotgun blast to the chest (Paul almost dies so that we might have life).

Throughout the movie, Paul’s powers are explained as some sort of “science,” but, to paraphrase Arthur C. Clarke, Paul’s “scientific” healing powers function essentially as supernatural or magical powers. More importantly, by the end, Paul does so in an act of pure sacrifice and charity. He literally takes on Pegg’s chest wound and nearly dies from it himself when he could have just hopped on his spaceship and sailed on home. 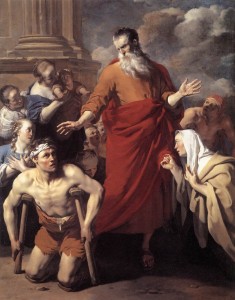 The Apostle Paul had some of these tricks up his sleeve, too:

God did extraordinary miracles through Paul, so that even handkerchiefs and aprons that had touched him were taken to the sick, and their illnesses were cured and the evil spirits left them.

[The young man] fell to the ground from the third story and was picked up dead. Paul went down, threw himself on the young man and put his arms around him. “Don’t be alarmed,” he said. “He’s alive!”

And trust me, he is not having a fun time while he’s out spreading the good news and performing miracles:

Praise be to the God and Father of our Lord Jesus Christ, the Father of compassion and the God of all comfort, who comforts us in all our troubles, so that we can comfort those in any trouble with the comfort we ourselves receive from God. For just as we share abundantly in the sufferings of Christ, so also our comfort abounds through Christ. If we are distressed, it is for your comfort and salvation; if we are comforted, it is for your comfort, which produces in you patient endurance of the same sufferings we suffer. And our hope for you is firm, because we know that just as you share in our sufferings, so also you share in our comfort.

Because just as Christ suffered to comfort us, so we must suffer to comfort others. Paul (the alien)’s selfless act of healing is just as the Apostle Paul describes it here, just without the Jesus stuff.

Now, some would say that the fact that both Pauls express selflessness doesn’t point to some sort of pro-Christian hidden message in the movie. And they’d be right. But again, I point to the existence of this plot point as an indication that the movie at least isn’t truly anti-Christian in the sense that it stands against the fundamentals of “Christian morals” as the Catholic News Service so strongly states. 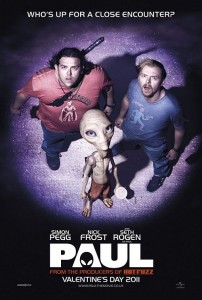 As for the movie’s “pro-atheism”: to my knowledge, no one in the movie flat out denies the existence of God, or a God, not even Paul. The movie clearly comes out against fundamentalist Christianity, but I don’t think it’s as clearly against theistic religion in the same way. [Note: if anyone has seen this movie and can speak to this point, please do so in the comments.]

I went into writing this article thinking that comparing the alien Paul to the Apostle Paul was merely a cheap joke that could be converted into a starting point for a discussion of themes of Christianity in this movie, and I was surprised to find that after writing it, the story of the Apostle Paul is actually key to understanding how this movie deals with Christianity. It’s not kind to Christianity’s lunatic fringe and its dogmatic interpretation of the faith, but at its heart, it espouses ideas that are right in line with the Apostle Paul’s teachings: the power of conversion, miraculous healing, and selfless sacrifice. 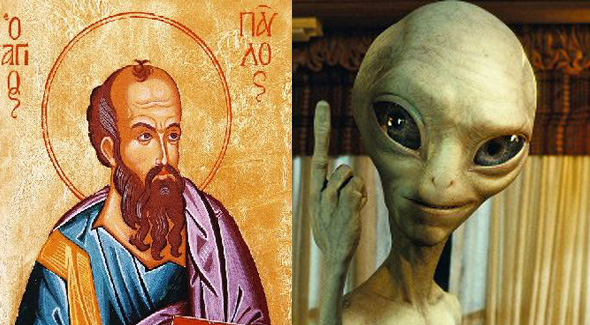 "Paul is not patient. Paul is not kind. But he did save Simon Pegg's life."

26 Comments on “The Alien Paul vs the Apostle Paul”