[Overthunk is a new series where OTI writers give short, unstructured thoughts about a piece of pop culture. They’re not meant to be as deep as a typical article. Use them as a springboard for further discussion in the comments below]

While we’ve already devoted some good analysis to the lyrics of Hold It Against Me, the video itself merits some thoughts of its own. The first time I watched it, I was blown away. Not by its videography (MTV standard) or its choreography (obscure and hard to follow). But for the overwhelming number of geeky images.

1. The title itself is a rather corny pun of a double entendre. And puns are a very geeky form of humor. Puns showcase linguistic cleverness, rather than surprise, wit or timing. It positions Britney not as a suitor (“Hit Me One More Time”) or as a seductress (“Slave 4 U”). Rather, she’s an ironic commenter on the pick-up game.

2. At the 1:30 mark, Britney logs on to PlentyOfFish.com, a dating website. It’s one of many instances of product placement in the video. Hardly shocking. But Plenty of Fish has always had a geeky rep. Its founder is a quiet computer programmer who, for years, remained deliberately aloof to his site’s money-making possibilities. He’s a tinkerer who created an unadorned site (which is now a little glossier), with the sort of style-less functionalism that drives Craigslist or any UNIX forum.

3. The second chorus (about 2:12) features Britney ascending a narrow column surrounded by screens. These monitors play out scenes from former or alternate lives – “Hit Me One More Time,” “Sometimes,” “Crazy,” etc. Glowing monitors crowded against a dark backdrop with a protagonist in white evokes nothing so much as the end of The Matrix Reloaded, with Neo confronting the Architect.

4. After this chorus, she casts prismatic spray, a 7th-level evocation spell which can blind, petrify, banish or madden one’s foes. It does up to 80 points of damage to anyone within a 60-foot burst. 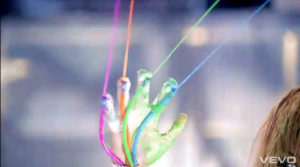 5. Then she spends about a minute in a bare-knuckle slugfest with the Dweller on the Threshold:

“From ancient recesses of the memory, from a deeply rooted past, which is definitely recalled, and from the racial and the individual subconscious (or founded and established thought reservoirs and desires, inherited and inherent) there emerges from individual past lives and experience, that which is the sumtotal of all instinctual tendencies, of all inherited glamours, and of all phases of wrong mental attitudes; to these, (as they constitute a blended whole) we give the name of the Dweller on the Threshold. This Dweller is the sumtotal of all the personality characteristics which have remained unconquered and unsubtle, and which must be finally overcome before initiation can be taken. Each life sees some progress made; some personality defects straightened out, and some real advance effected. But the unconquered residue, and the ancient liabilities are numerous, and excessively potent, and – when the soul contact’s adequately established – there eventuates a life wherein the highly developed and powerful personality becomes, in itself, the Dweller on the Threshold. Then the Angel of the Presence and the Dweller stand face to face, and something must then be done. Eventually, the light of the personal self fades out and wanes in the blaze of glory which emanates from the Angel. Then the greater glory obliterates the lesser. This is, however, only possible when the personality eagerly enters into this relation with the Angel, recognises itself as the Dweller, and – as a disciple – begins the battle between the pairs of opposites, and enters into the tests of Scorpio. These tests and trials are ever self-initiated; the disciple puts himself into the positive or conditioning environment wherein the trials and the discipline are unavoidable and inevitable. When the mind has reached a relatively high stage of development, the memory aspect is evoked in a new and conscious manner, and then every latent predisposition, every racial and national instinct, every unconquered situation, and every controlling fault, rises to the surface of consciousness, and then – the fight is on.” 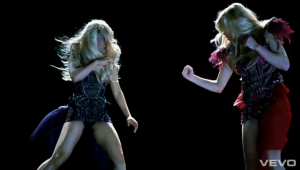 Music videos have been digging into obscure imagery for decades, but theosophy’s a whole new angle.

So what’s with all the nerd references? If every music video by a major pop star is an attempt to invest that pop star with a new identity, what identity is being created here?

Or read more from… Music, astrology, britney spears, D&D, hold it against me, overthunk, the matrix

3 Comments on “Overthunk: Hold It Against Me”