Perich: Here’s something that’s bugged me for years about Dirty Dancing.

The movie’s set at a summer resort in the Catskills. Johnny (Patrick Swayze), who has just been fired, struts back into the main lodge and reminds the stunned crew that the staff always had the final dance of the season. He takes Baby (Jennifer Grey) by the hand, leads her on stage and gives a vinyl record to one of the staff. The two of them dance like wounded angels, thrilling the crowd and redeeming Baby with her father.

It’s a phenomenal dance scene, don’t get me wrong. And coming when it does in the film, it’s a thrilling climax.

There’s just one problem: this movie takes place in 1963. Based on what little I know about music, it’s impossible that that song could have been written then.

1. The intro of the song features synthesized keys and synthesized harp strings.
2. After the intro, there’s a bass line that’s clearly inspired by funk, which is still at least a decade away.
3. It’s too simple of a production – starts slowly, builds quietly. Given Phil Spector’s dominance in the pop recording industry at the time, a contemporary song would have had the “Wall of Sound” effect.

But I realize that I don’t have a fraction of the musical chops that some other writers have. So I open it to you guys. Is this song even musicologically possible in the setting of the film? If not, why not? And why do we accept it when it comes on?

I’m not suggesting it’s wrong to like this movie, or even this scene. It’s a great scene! What I’m asking is why does it work, given how anachronistic the song is?

Belinkie: My theory is that the characters in the film are not actually hearing “Time Of My Life,” at least the version we are. They’re hearing something era-appropriate, and the movie is “translating” it into a 1987 popular music vernacular. This may sound convoluted, but movies do this all the time. Think about all those films set in ancient Rome, in which the characters speak English (always, for some reason, with British accents). Those filmmakers aren’t suggesting that the Romans really spoke English. It’s an artistic choice to break down some of the cultural distance between us and ancient Rome, so we can connect to the story better.

Examples of musical translation are rarer, but not unheard of. Take A Knight’s Tale, the 2001 Heath Ledger film that always surprises me by being better than I expect. During the opening jousting scene, the soundtrack not only plays “We Will Rock You,” we see the crowd clapping and stamping along with it. This isn’t mere silliness. Wikipedia paraphrases some of the DVD commentary by director Brian Helgeland:

“He justifies his use of music by speculating that even during the 1370s, persons in the main characters’ age group would’ve enjoyed newer, more contemporary music than something that had been around since their great grandparents were young, and opted to use music that would affect the audience the same way late 14th century music would’ve affected the youth of the 1370s. Thus, Helgeland attempted to stylize the movie in such a way as to bring the Middle Ages to the audience, rather than force the audience into the Middle Ages.”

The fact is, when we get into that “Time of My Life” dance number, Dirty Dancing doesn’t seem like a period piece. The era fades away, and we’re just watching a dance. It’s a neat trick, actually.

Stokes: This is something performers of medieval music struggle with a lot. If you try your hardest to recreate the sound waves they heard back then, you can end up with something that sounds very archaic to us. But whatever they thought about the music then – and we know very little about that – they almost *certainly* didn’t think of it as archaic. So by hewing close to the actual sounds, one distorts the experience, and possibly vise versa.

Lee: I’ve always wanted to record a version of “Time of My Life” as it would have sounded in the vernacular. As in, with early 60’s Motown/Phil Spector aesthetics. This would be time consuming but totally doable.

Sheely: I can’t believe that no one has yet suggested the possibility that this is a “Johnny B Goode” situation, in which, entirely off camera, Swayze’s character has time-traveled to 1987 and the record that he gives to the DJ is in fact the Bill Medley and Jennifer Warnes 7″, meaning that he single-handedly creates 80s pop.

Although, come to think of it, that is EXACTLY what happens in Hot Tub Time Machine:

Perich: HTTM is an interesting reference because Nick (Craig Robinson) has come back in time in order to redeem his wasted youth.

Is Johnny’s story similar? He mentions when he gets onstage that he learned that there are people who care about other people in the world. Dirty Dancing isn’t just a story of Frances growing up; it’s also a story of Johnny learning how to trust.

Maybe there’s an alternate future where Johnny becomes a bitter loner. Unemployable after getting fired from the Catskills, he drifts from one anonymous town to the next. Then, twenty years later, a magical old man sends Johnny back in time. He shows those stodgy old folks at the summer resort that dancing is supposed to be about energy, athletic exhibition and thinly-veiled dry humping.

[What do you think, faithful readers? Is Patrick Swayze traveling through time in search of redemption? Is he dancing with a power that transcends cultural limitations? Or did he bring pop from the future to give to the present … in the past? And do you want Mark to record a 60s-era “Time of My Life”? Sound off in the comments!] 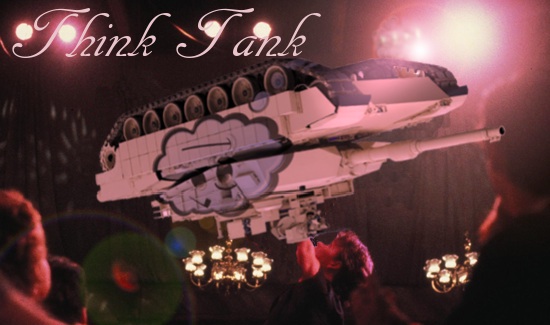 19 Comments on “[Think Tank] The Time Paradox of My Life”