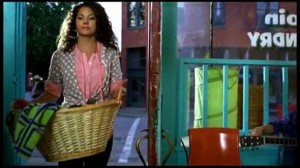 When I took an in-depth look at Justin Bieber’s music video “One Less Lonely Girl,” I concentrated my analysis on the socio-economic and political messages embedded within, but commenter Rosa made this astute observation about the ethnicity of Bieber’s love interest in the video:

Also note the carefully cast, ambiguously ethnic love-interests for Mr. JB. I’m sure that helps keep the fan base happy

Read on for the exciting conclusions of my latest Bieber-obsession-driven analysis. 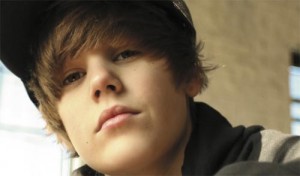 I know, I keep writing about this kid. I'm kind of obsessed. Just bear with me as I work this out, ok?

Patience, Beliebers. Before we get to the data, I need to explain my research methodology (i.e., how I spent two hours of my life watching Justin Bieber music videos). My first stop was Justin Bieber’s YouTube home page, where there are 9 full-length music videos available for your viewing pleasure. I excluded “Never Say Never” as it heavily features footage from the recent Karate Kid remake, which of course features bazillions of Chinese people. For the remaining 8 videos, I made my best attempt at counting every person who appeared in the video, even in the background, and classify them as either “White,” “Black,” “Asian,” or “Ambiguous/Unknown.” “Ambiguous/Unknown” contains everyone whose skin/hair indicates something other than unambiguously Caucasian or African, as well as those that I couldn’t get a positive ID on, either because their faces were hidden by masks, away from the camera, or otherwise obscured.

I should acknowledge that this racial taxonomy doesn’t really account for “Hispanic” which, although technically isn’t a “race,” is obviously a major “ethnic group” and one of the ways that Americans readily break people down into groups of people for easy stereotyping, discrimination, and “if you marry one of those people, I’ll disown you.” (If you’re really interested, you can read more about the distinction between “race” and “ethnicity” here, but I’m not going down that rat-hole in this piece.) That being said, I’m going to present these breakdowns as-is, as well as with more straightforward White-to-black ratios, and let you all duke it out in the comments.

I should also acknowledge that these stats are the result of my best attempt at counting everyone in the music videos, and that it’s highly likely that I missed a few faces here and there, especially in the large crowd scenes. So if you went and did this on your own (I don’t recommend it–it’s really freaking tedious, and it requires listing to more Justin Bieber music than even I can stand), you’d probably come out with different counts than I did. But I’m pretty sure that your results would be roughly in the same proportions as mine.

OK! Enough with the hedging! Tell me, is Justin Bieber our post-racial savior, or what?

This one’s pretty straightforward. Of the eight music videos I included in my analysis, five featured a female romantic interest playing opposite Bieber. Of those five girls, I deemed four (80%) of them to be of “Ambiguous/Unknown” racial/ethnic origin:

There’s plenty of room for debate regarding the race/ethnicity of the “One Time” girl, but even if you think that she could be white, it’s still pretty remarkable that four out of five of these romantic interests have dark hair and only one is blonde. I say this even while granting the possibility that dark-haired girls were cast in order to provide contrast with Bieber’s blond hair.

My conclusion is that Rosa was onto something with her comment. Bieber’s image-makers have intentionally cast racially/ethnically ambiguous girls to play opposite Bieber in his videos to allow young fans from as many ethnic groups as possible to picture themselves in a similar role…snuggling up to Justin Bieber in a bowling alley or laundromat.

This one’s note quite as straightforward. If you look at the breakdown across all four groups that I described earlier (White, Black, Asian, Ambiguous/Unknown), You’ll see that White and Black are the largest groups, but Ambiguous/Unknown makes up a not-so-useful 20% of the pie: 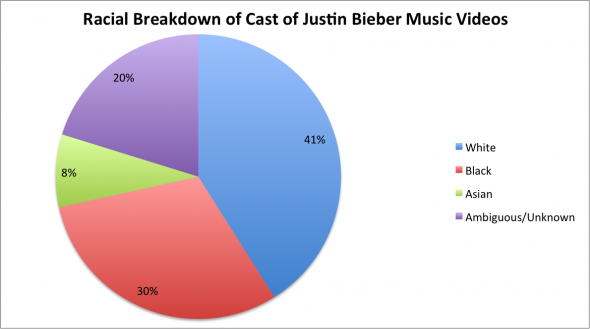 It is worth noting, though, that at 8%, Asians are well over-represented compared to their share of the overall population (about 4%). This is almost entirely due to the large number of Asians in the inexplicably Asian-themed “Somebody to Love” video.

But beyond that, the large Ambiguous/Unknown pie leaves too much uncertainty. So let’s focus on Whites and Blacks, the two groups I was able to count with the highest degree of confidence, and the two groups which are most often at polar opposite ends of demographic trends: 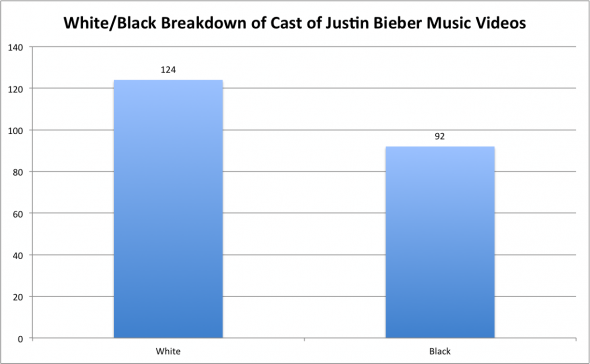 With 124 Whites to 92 Blacks, that works out to a 1.35 White-to-Black ratio. In plain terms, that’s fairly even representation, especially considering that Bieber is a white artists and that in the general US population, (Non-Hispanic) Whites outnumber Blacks by a roughly 5-to-1 ratio: 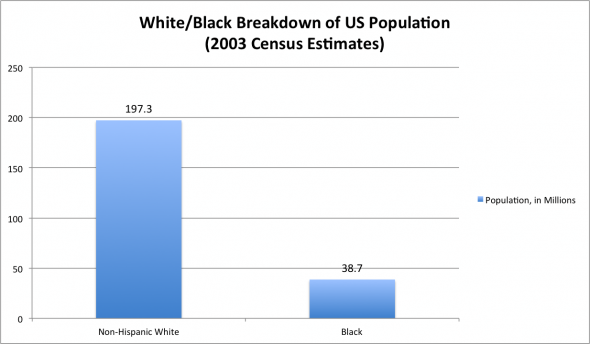 Conclusion – What Does This All Mean?

These results aren’t exactly revelatory or surprising beyond the fun use of statistics to back up things we know intuitively. Of course Justin Bieber’s handlers are trying to maximize his appeal across as many demographics as possible. That’s how they sell more albums, downloads, and concert tickets.

But going back to the question that I somewhat jokingly tossed out at the beginning of this article: Is Justin Bieber our post-racial savior, or what? I put that out there because it seems that some may already see him as such, possibly even Bieber himself. Back in May, when Justin Bieber was nominated for the “Best New Artist” BET Award, The Hollywood Gossip made the astute observation that he was the only non-black artist nominated in the category and declared in its not-so-subtle headline, “Justin Bieber Transcends Race.” As support for this claim, they carried this quote from Stephen Hill, BET’s President of Music Programming and Specials:

Through a series of Twitter posts, Bieber responded to the news of the BET Award nomination with the following:

Thank u to BET for nominating me for Best New Artist @ the BET Awards this year!! This is an incredible honor and I’m very grateful… read some articles about my bet nomination n (and) i think this goes 2 show that music is color blind… Music is the universal language no matter the country we are born in or the color of our skin. Brings us all together.

Consider what Bieber knows about the space he occupies in the racial discourse at this point: although Bieber is white, he’s operated under the traditionally black R&B genre since his cover versions of R&B songs led to his discovery by Usher, a black R&B singer. At the time of the nomination, he’s already shot four music videos with racially diverse casts and non-white love interests. And Bieber’s BET Awards nomination was only the fourth for a white performer in the history of the awards. It’s easy to see how he perceives himself as some sort of post-racial entertainer.

But consider the irony of using the phrase “color blind” in reference to the “Black Entertainment Television Awards.” Bieber may be correct in saying that that “music is colorblind,” but the music business and the marketplace he sells his music to are anything but. And that’s why it matters if Justin Bieber is nominated for a BET award, if Justin Bieber dances with non-white girls in his videos, and if Justin Bieber has a lot of black people in his videos. We may not live in a post-racial utopia just yet–again, I point to the existence of “Black Entertainment Television”–so until we do, these things matter.

And to the extent that Bieber is able to project a racially/ethnically diverse image, I’d say he’s actually doing a service. It may not be color-blind, but it’s one step towards a day where there won’t be any need for some blogger on the internet to calculate a White-to-Black ratio for Justin Bieber music videos.

And that will be a good day indeed.

[Click through to the next page for a more detailed breakdown of my counts, video-by-video, as well as all of the videos embedded for your listening, viewing, and analyzing pleasure.]

17 Comments on “Race and Diversity in Justin Bieber Music Videos”