While the rest of the internet was busy deciphering Lady Gaga’s latest music video “Telephone,” my attention was turned to a far more relevant and, dare I say, revolutionary, piece of video-music art. I am, of course, referring to Justin Bieber’s treatise on American renewal, “One Less Lonely Girl.”

[For those of you who may not be familiar with Justin Bieber, I direct you to this summary of his life and accomplishments to date. In short, he’s a young pop star who is adored by pre-teen girls to the point where a cancellation of his concert caused a riot in a Long Island mall. Also, he is a trending topic on Twitter. Every day. At all hours. Which I suppose makes him less of a “Trending Topic” on Twitter and more of an “understood topic at all times.” But I digress.]

Have you watched the video all the way through? No? The silky-smooth auto-tuned voice and baby-faced good looks were too much for you to handle? Not an excuse. Suck it up and watch. I’ll even embed it again for your convenience:

Finished now? Good. If this was your first time watching, I wouldn’t blame you for missing the political message and only seeing the maudlin (not to mention slightly creepy) love story at play. To summarize, Justin Bieber is hanging out a laundromat, where he makes eyes with a girl who, judging by the lyrics of the song, has recently exited an unsatisfactory romantic relationship. The girl intentionally leaves the scarf as a signal to Bieber to pursue. Rather than return the scarf immediately, Bieber leads the girl to him (and the scarf) through arrow signs and Polaroids promising future romantic satisfaction. The arrows and Polaroids lead the girl back to the laundromat, where she and Bieber share a romantic slow dance.

Admittedly, this plot is pretty weak. The system of arrows and Polaroids at first seems like some sort of Robert Langdon-esque series of clues, but the messages with the Polaroids are nothing but romantic platitudes without any hints as to the next step on the journey. All direction is left to the arrows–there’s no ambiguity as to where the girl should go next.

Now, let’s dig deeper, shall we?

As I mentioned before, this song/video offers a treatise on American renewal, not just a nice little love story involving two tweenagers. Let’s start with the setting. Did you notice those strategically placed American flags dotted throughout the video? 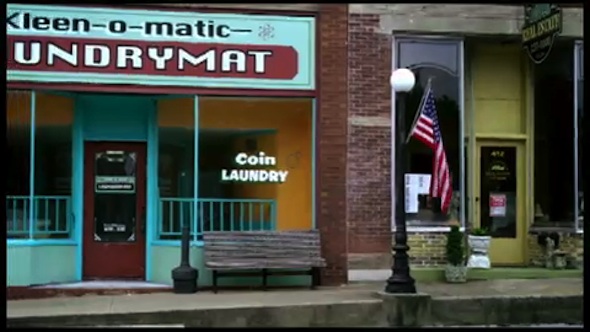 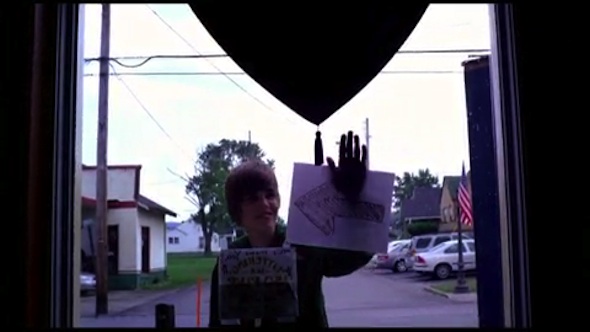 As Fenzel astutely noted in his analysis of the placement of Vespa scooters on the set of the music video for “Morning After Dark,” these sorts of details aren’t accidental. Somebody had to spend a day finding American flags and placing them such that they’d appear in the video, and as such, they’re important to our analysis.

The flags clearly tell us that the setting is designed to reach beyond its specific locale and represent all of America. But not just any America. Did you notice that the overall setting is that of a typical small town “Main Street”? 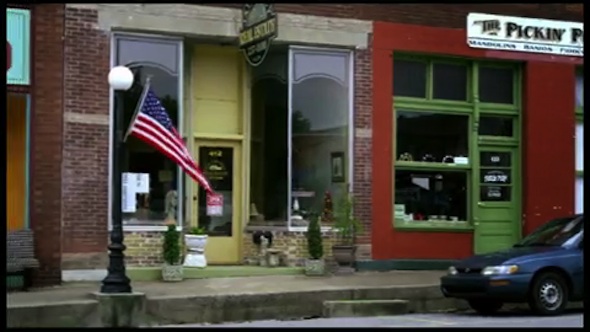 Can someone cue the John Mellencamp?

Or that the newsstand (in itself slightly anachronistic) carries vintage comic books and has an old-school mechanical cash register? 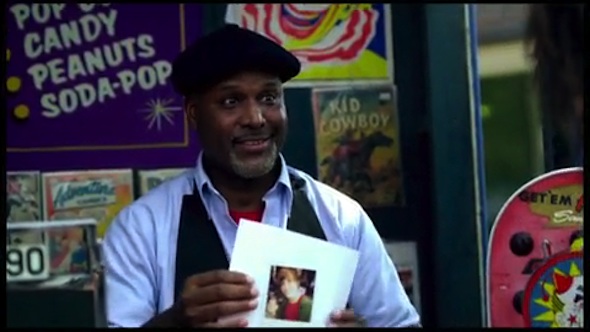 "Kid Cowboy" was an actual comic book from the '50s. Look it up.

Or that the door to the laundromat sports a 50’s era vintage sign? 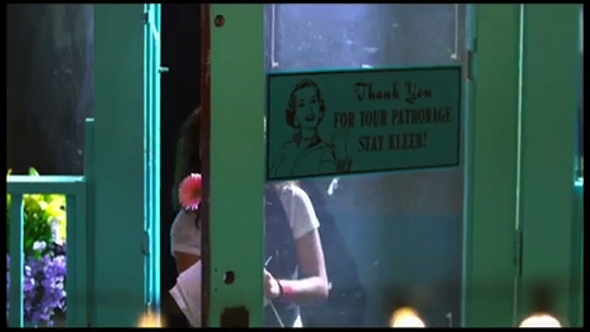 Not sure what the significance of the misspelt "Kleen" is. If you have any ideas, hit me in the comments.

Or that the girl’s laundry basket is wicker, not plastic? 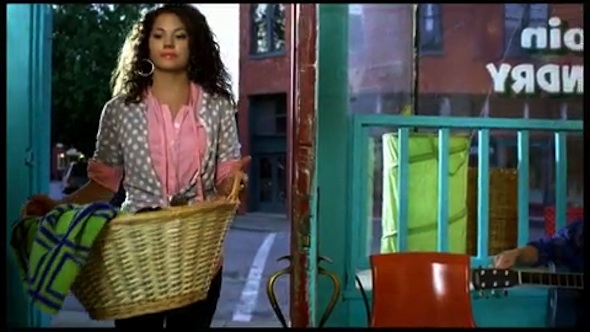 These details aren’t bashing the viewer over the head, but when put together, it’s surprising the lengths the video director went through to convey this sense of nostalgic Americana. This is a Justin Bieber video we’re talking about–most 12 year old girls who comprise his audience could care less about these sorts of details–yet someone chose to put them here. I repeat: it’s no accident.

Now, let’s dig a little more into the circumstances of the characters depicted in the video. The girl is doing laundry in a laundromat, which is never the most desirable place to do laundry. Outside of college campuses and New York City, laundromats are seen as the place to do laundry if you’re one of those unfortunate people who can’t afford to live in a place that offers the most basic of amenities, a washer and dryer.

In other words, the girl is poor, which is why she’s at the laundromat. 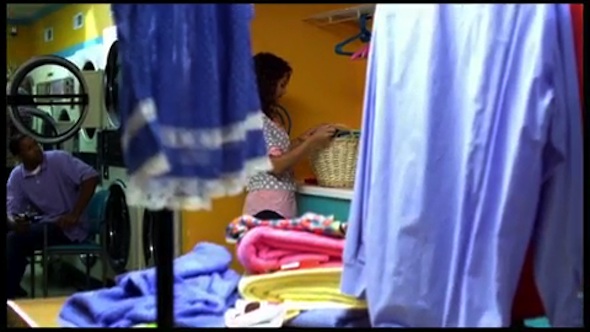 There's a black guy in the background. I repeat: it's not an accident.

This little piece of setup casts the heartache described in the lyrics in a totally different light. The girl’s suffering is less about romance and more about her economic well-being:

How many I told you’s
And start overs and shoulders
Have you cried on before
How many promises be honest girl
How many tears you let hit the floor
How many bags you packed
Just to take ’em back, tell me that
How many either or’s

There’s a recession out there, not just for this girl, but also for this quaint little main street. Notice anything about these shots? 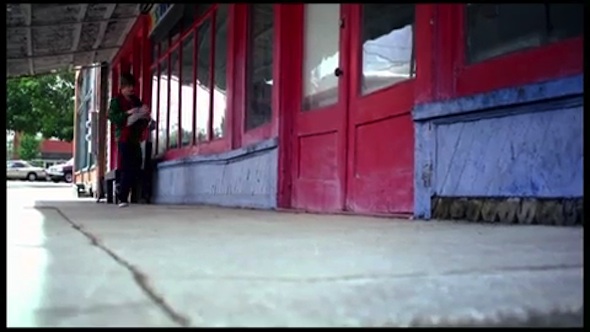 The lights are off inside, and the woodwork outside is worn down and in need of repair. It’s clearly a vacant storefront, another sign of hard times.

The video has created a portrait of a struggling American in a struggling All-American town. Remember, those details–the flags, the sign, the laundromat–aren’t accidental. They’re there to provide the context for the delivery of the message of American renewal.

Fortunately for the girl, the town, and our nation, the video demonstrates how we have the capacity to lift ourselves up and out of our predicament.

Although the town may be facing hard times, it retains both a vibrant street life and a communitarian spirit. The social fabric of the community remains strong and is essential to Bieber’s plan to woo the girl; without willing cooperation of strangers, his plan simply would not have been possible. 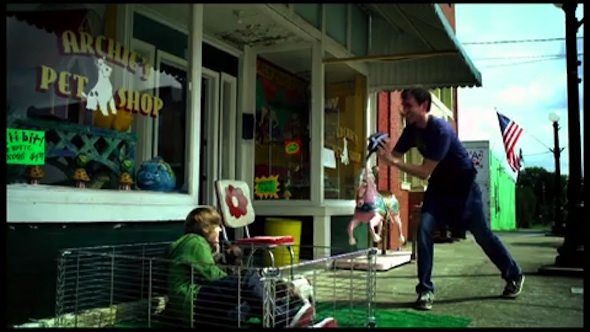 By the way, in case you didn't catch it, the Polaroid camera is another intentional call to nostalgia.

The message is clear: America can only be redeemed through collective action and a strong sense of community, not through rugged individualism or a fractured public space.

But in addition to communitarianism, sacrifice is also required to redeem America. Specifically, America must be willing to accept a lower standard of living, or at least reject certain luxuries, to achieve a more sustainable prosperity. The video communicates these through three subtle plot points: 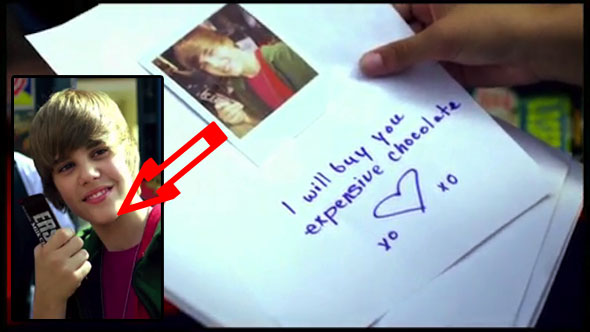 Side note: continuity error in the way he's holding the chocolate bar in his hand.

2. Bieber’s flower of choice is a single humble daisy instead of a more decadent bouquet of roses: 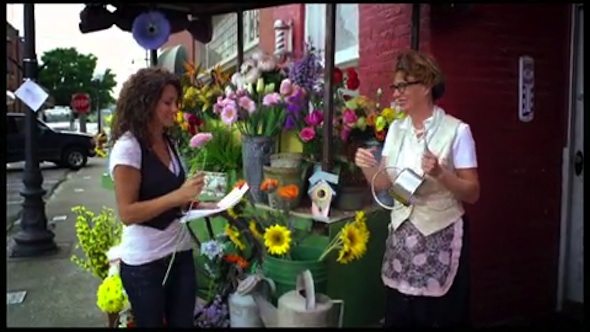 I'm pretty sure she sells roses at this stand. But the poor kid couldn't afford them.

3. Most importantly, the humble laundromat and not a fancy ballroom or club, serves as the site of the couple’s romantic slow dance: 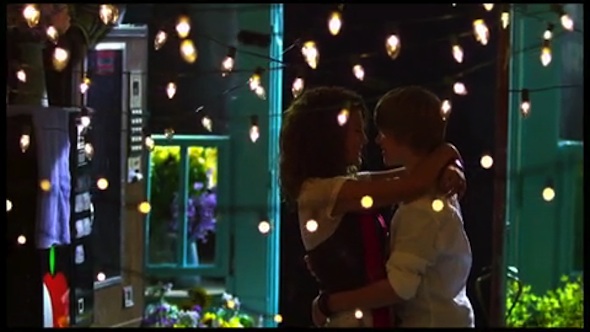 Later he shows her his "spin cycle."

This call to communitarianism and fiscal restraint is well reflected by the video, but less so by the lyrics. In fact, they convey a far more singularly focused message:

At first, this seems at odds with the visual message: the video preaches community, but the text preaches singular devotion. However, this singular devotion is actually part of the same prescription for American renewal as are communitarianism and fiscal responsibility. Many have argued that a major factor in America’s recent decline was our government’s undue attention towards foreign, and not domestic, concerns (“those other pretty faces”). This includes expensive wars in Iraq and Afghanistan as well as the increased economic competition brought on by globalization and free trade.

When Bieber says “I’m gonna put you first,” he advocates for our government to prioritize its domestic concerns above all others. Without expensive overseas wars, nation-building, and destructive global capitalism to distract America and siphon away it wealth, people can reconnect with each other, rebuild their communities, and return to a simpler way of life.

None of the individual components of this message are by themselves novel. David Brooks has been preaching the need for a renewed sense of American communitarianism for years in his columns. Annie Leonard’s recent book, The Story of Stuff, criticizes the vicious cycle of American consumerism and advocates for a simpler way of life. And countless leftists have railed against free trade, globalization, and nation-building wars for decades.

But few have brought these disparate ideas together in such a compelling way as Justin Bieber. And none have certainly applied auto-tuned vocals and baby-faced good looks to conveying this message to an unwitting and highly receptive young audience. His ideas have the ability to influence a whole new generation of political thinkers and leaders. Once they set forth to make this vision a reality, there truly will be one less lonely girl: 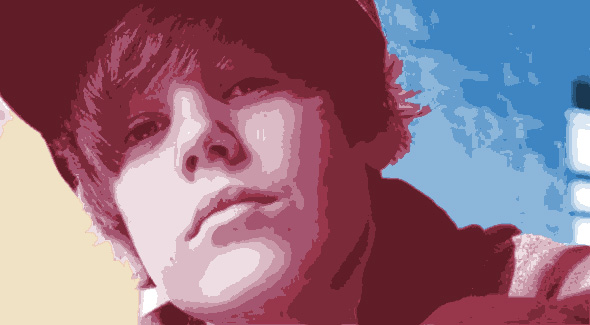 OK, I’m not seriously suggesting that Justin Bieber, his music video director, or any of the other people involved in the making of this video were trying to advance a political agenda through a high-concept allegory. But I do find it fascinating that so much of the imagery seems to advance this idea that in traditional, small town America, ordinary folks live a modest life and achieve their goals through cooperation and trust. This stands in stark contrast to the heroic individualism and material excess of most pop music narratives.

I would say that the message of this video is somehow connected to Bieber’s humble origins and some sort of attempt to introduce him as a safe, non-threatening entertainer, but that theory is mostly contradicted by his first music video, in which he throws an unauthorized party a the house of R&B legend Usher:

As for what’s going on in this video, well, that’s another topic for another day.

16 Comments on “The Musical Talmud: “One Less Lonely Girl” by Justin Bieber”