In the absence of law, custom, institutions or history, human beings exist in the state of nature. It’s anarchy, but not necessarily the enlightened anarchy of philosophy or the chaotic anarchy of our fears. It represents the Age of Reason’s presumption that law is a human invention, not the result of divine stone tablets. And like all human inventions, there must have been a time prior to law.

With the growth of anthropology as a science, we have more certainty of how human beings lived prior to the formation of law. We know that the Code of Hammurabi did not invent laws out of whole cloth, but instead codified existing customs of behavior. In spite of that, the idea of the state of nature still has a lot of resonance.

(I thought this was about zombies, Perich! Patience – keep reading)

The state of nature ends as soon as the inhabitants form a social contract. A social contract – sorry, high school debate students – is not a literal piece of paper. Rather, it’s a common understanding of the ways people should behave. This includes, but isn’t limited to, laws enforced at gunpoint. It also includes customs, popular memes and the status games inherent to any social scene.

For example: when you’re watching a movie or a football game in a crowded living room, and you get up to go to the bathroom or kitchen, what happens to your seat? If you’re an adult, you can expect that the seat will still be available when you return. Or, if someone unknowingly took your seat, they’ll apologize and vacate it. Conversely, if you’re a teenage boy, you know that you have to declare “Fives” on your seat as you stand up, meaning that you intend to return within five minutes. If you don’t make that declaration, your seat is up for grabs.

The rules on seat availability differ with age, gender and geography. They are nowhere written, and you don’t learn them on the first day of school. But after you see someone steal a free seat because its owner didn’t call “Fives,” you know what the game is. You’ve seen another aspect of the social contract. 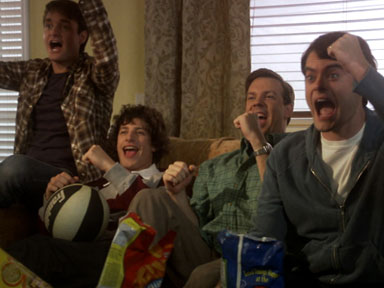 Social contracts also have understood enforcement mechanisms and penalties for scofflaws. This holds true for custom as well as law. If you call “Fives” and someone steals your seat anyway, you have a variety of responses depending on your social circle (call the guy a “douchebag,” slap him in the top of the head, stop inviting him to watch football at your house, etc). But it’s understood that you can’t stab him.

Similarly, if someone breaks into your car and steals your stereo, you also have a variety of responses. In middle-class neighborhoods, the response is usually to call the cops. In upper-class neighborhoods, in addition to calling the cops, one might install additional security around one’s home. In lower-class neighborhoods, going to the police is just one option: you might also call your big cousins, especially the one who used to box Golden Gloves and has a detached retina, and go visit that guy two blocks over who’s known to move hot stereos.

It only takes a little while in a strata to understand what’s an acceptable response to transgression. That’s the social contract. Social contract theory is that branch of philosophy which examines how and why people form social contracts. Why have customs or rules? Why not just make every decision ad hoc? And what’s wrong with the state of nature, anyway?

There are lots of answers to those questions, but two names get cited more than any others: Thomas Hobbes and John Locke. I’ll explain a little about each of these philosophers and their theories in the context of (FI-nally) The Walking Dead. 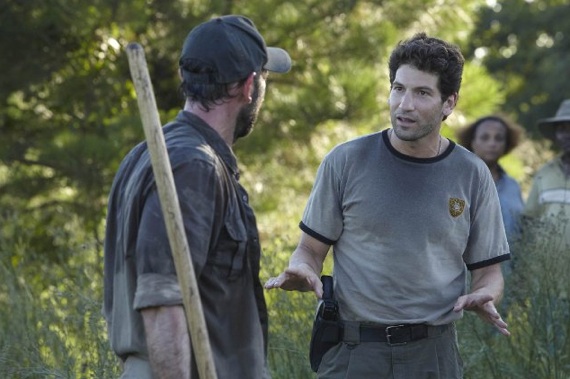 The state of nature has a law of nature to govern it, which obliges every one: and reason, which is that law, teaches all mankind, who will but consult it, that being all equal and independent, no one ought to harm another in his life, health, liberty, or possessions.

John Locke’s theory of the social contract, and the state of nature, is embodied by Shane. Shane believes that social order can be rebuilt out of a mutual recognition of the values of teamwork. Shane wants the survivor camp to come together willingly. He doesn’t yell and he doesn’t wave his gun around. But he doesn’t back down from enforcing the rules.

Shane: Hey, Ed? You wanna rethink that log?
Ed: It’s cold, man.
Shane: Cold don’t change the rules, now does it? Keep our fires low, just embers, so we can’t be seen from a distance, right?
Ed: I said, it’s cold. Whyn’t you mind your own business for once?
Shane: Ed? You sure you want to have this conversation, man?

Locke’s social contract, and Shane’s, hinges on reason. People emerge from the state of nature because, as rational creatures, they see a value to it. An established tradition of how to trade, how to handle differences and when to fight makes life easier for everyone. Locke presumes that a society emerges from the state of nature once enough people recognize those benefits.

Shane wants people to recognize those benefits, too. When Jim snaps and begins digging mass graves, Shane spends a long time trying to talk him down. He doesn’t get violent until Jim provokes him, swinging the shovel like a weapon. He’s the man with the gun, and (until Rick shows up) the only man with a badge. But he doesn’t bark orders. 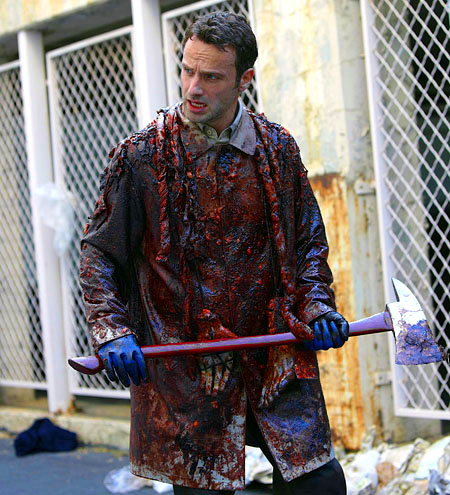 When all the world is overcharged with inhabitants, then the last remedy of all is war, which provideth for every man, by victory or death.

That phrase might also describe Merle, one of the first survivors Rick meets. Hyped up on drugs, Merle takes potshots at walkers from a rooftop, overpowers the other survivors with brute force and decides to take what he wants. It’s only when Rick ambushes him and claps a gun to his head that he’s subdued. In this conflict between survivors, violence wins the day. Thankfully it’s violence in the hands of a good man (Rick) instead of a bad one (Merle).

Merle isn’t literally the first survivor Rick meets, of course – that’s Morgan and his son, Duane, squatting in Rick’s old neighborhood. But Rick’s first encounter with them is equally violent. Duane smacks Rick in the head with a shovel, then Morgan ties Rick up until he’s sure that Rick isn’t infected. Again, violence rules the day here: an alert man and his well-trained son get the drop on a dehydrated police officer. It’s fortunate that it’s good men employing that violence instead of bad.

How do we make sure that it’s only good men who employ violence? What’s required (says Hobbes) is a recognition among people in the state of nature that the war of all against all must stop. The only way to permanently stop it is to form a commonwealth and appoint a sovereign, surrendering all decision-making power to him. Here Hobbes’s theory differs from (and predates) Locke’s. In Locke’s state of nature, people use their reason to form a social contract. In Hobbes’s, people are ruled by passion, and the strong sovereign is the only cure. “That miserable condition of war […] is necessarily consequent, as hath been shown,” Hobbes writes in Leviathan, “to the natural passions of men when there is no visible power to keep them in awe.”

Rick’s style of leadership derives from that: keep people in awe, rather than appeal to their reason. He may lay out reasons for what he does, but that’s to keep the commonwealth in line, not to persuade them. When he decides to return to Atlanta to save Merle, he makes the decision first, then starts making arguments (they owe it to him; there’s a bag of guns in town; etc). But it’s clear he’s already made the decision.

Shane: Douchebag’s what I meant. Merle Dixon – that one wouldn’t give you a glass of water if you were dying of thirst.
Rick: What he would or wouldn’t do doesn’t interest me. I can’t let a man die of thirst. Me. Thirst and exposure. We left him like an animal caught in a trap. That’s no way for anything to die, let alone a human being.

15 Comments on “Bellum Omnia Contra Zombies: The Walking Dead and The Social Contract”