Machete is a story about two cultures unhappy with the law for different reasons. On one side you have the Network – a collection of immigrants (legal or illegal) who help Mexicans cross the border and find new jobs. On the other side you have Von Jackson (played by Don Johnson) and his militia of vigilantes. They patrol the border and execute illegals as they cross.

Neither side operates with the blessing of the law.

In fact, we see almost no legitimate law enforcement in the movie. Machete starts the movie as a federale, but the only mission we see him go on is a result of him disobeying his captain. Besides, given the corruption inherent in Machete‘s Mexico, one could question whether los federales are “legitimate law enforcement” anyway. Jessica Alba plays an ICE agent, but her only contact with her superiors is via cell phone. We never see any ICE agents other than her. And the two cops who arrest Machete after the botched assassination are not actual cops, as we learn during a hilarious bit of expository dialogue. 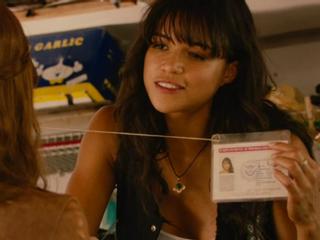 The absence of cops becomes a little conspicuous as the movie progresses. Osiris Amanpour (gore effects legend Tom Savini) and his crew show up at a downtown church, prominently toting assault rifles, without drawing anyone’s attention. Buildings blow up, shots ring out and bodies get eviscerated without anyone raising an alarm. There’s an occasional siren in the distance that forces Machete to run faster. That’s about it.

So the Texas of Machete is a world without law. But that doesn’t mean it’s a world of chaos.

Anarchism, once you get outside of high school, is any philosophy which asserts that the state does not provide the most just distribution of goods and liberties. There are a wide variety of anarchist philosophies, ranging from Kropotkin’s anarchist communism to Rothbard’s anarcho-capitalism. But as much as these anarchists disagree, they would probably find common ground in philosopher Max Weber’s definition of The State:

if and insofar as its administrative staff successfully upholds a claim on the monopoly of the legitimate use of violence in the enforcement of its order.

(see Politics as a Vocation; it should be noted that Weber was not an anarchist himself) 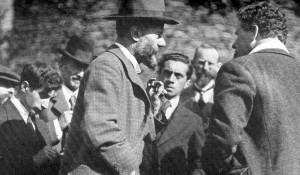 When I roll up twenty deep, there's twenty knives in the Lauensteiner Tagung.

So, a State is that agency which (1) has a monopoly on force in a given area and (2) upholds the claim that this monopoly is legitimate.

In Texas as depicted in Machete, no agency has a monopoly on the use of force. The Network and Jackson’s vigilantes can trade gunfire with equal capacity. Both sides are criminals, but neither seems particularly afraid of the cops. Texas has no government – no State as Weber would recognize it. Therefore, it’s an anarchy.

But what sort of anarchy is it?

The Network looks a lot like an anarcho-syndicalist commune: it has thousands of members but no real hierarchy. Luz (Michelle Rodriguez), a/k/a “She,” isn’t in charge of the Network. She can get things done the way anyone gets things done in a commune: by shouting loud enough to get everyone to agree with her. They’re also explicitly pro-labor, which makes it almost too tempting to put them on the left side of the anarchist spectrum.

Does that mean the Vigilantes are on the right side of the spectrum – a sort of anarcho-capitalist mutual protection society? Not necessarily. For one thing, the Vigilantes are also pro-labor: they want to defend American workers from the “scourge” of cheap Mexican labor. Second, an anarcho-capitalist mutual protection society requires a consenting contract between those being protected (in this case, American laborers) and those doing the protecting (the Vigilantes). The Vigilantes may think they have the blessing of the American public, but that’s not good enough. 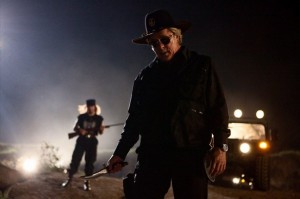 As of this writing, Don Johnson's character is incorrectly credited as 'Lt Stilman' on IMDb.

If the Vigilantes are also anarchists, they probably fit better under the egoist anarchism espoused by Max Stirner. Stirner’s vision of anarchism doesn’t require abolishing the state, but merely ignoring it. It hinges on Stirner’s notion of Eigenheit, or “ownness.” No state should stand in the way of satisfying this ownness. Stirner was remarkable in rejecting not just the state, but also religion, family pressure, the force of our own appetites and even consistency. If I was a fool yesterday, Stirner asks, why must I remain such?

So, is Machete the story of two conflicting philosophies of anarchism? Not exactly.