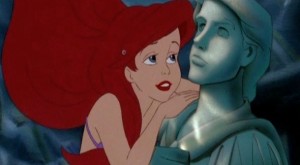 The Disney Corporation’s relationship with conservative religious groups over the last twenty years has been troubled at best. A decade-long boycott began in 1995, protesting the fact that the company permits Gay Day to take place at Disney World (because refusing to sell tickets to people in matching shirts makes sense) and extends insurance benefits to the partners of gay and lesbian employees. Although there were other objections – Miramax’s release of the movie Priest was high on the Catholic League’s list – these were the focus. As a result, many groups (overwhelmingly Christian, but two Jewish and one Muslim) boycotted and denounced Disney for years. But there can be no doubt that in this war, Disney fired the first shot.

Not with their acceptance of homosexuality, though. If these religious groups had been paying attention, the boycott would have started six years earlier. Because 1989 was the year Disney released a film that offered sophisticated criticism of some of the basic tenets of Judeo-Christian beliefs. Disney encouraged children to look for salvation not in the teachings of God but in the independence of the secular world. I’m referring, of course, to The Little Mermaid.

The Little Mermaid is a straightforward retelling of the story of humanity’s fall from the Garden of Eden. It is the story of a young woman (Ariel/Eve) covetous of something she does not have (Prince Eric/Fruit of Knowledge), and what it will give her (knowledge/the human world). This desire is forbidden to her (by King Triton/God). But she listens to the advice of something evil (the snake/Ursula), and as a result gains the forbidden knowledge. Ultimately, she leaves the Garden of Eden forever. Both Eve and Ariel decide, with a little encouragement, to buck the rules and choose knowledge. 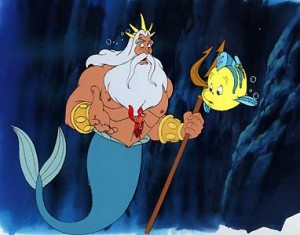 King Triton is a lot like the God of the Old Testament. He has limitless supernatural powers, is the ultimate sovereign, quick to anger, not open to negotiation, and is acting out of love for the children he may well have created with said supernatural powers (I haven’t seen Ariel’s Beginning, and I’m going to carry on pretending that it, like so many direct-to-DVD Disney sequels, does not exist).

Ursula, following the Paradise Lost Satan storyline, used to live in the palace. She says that King Triton cast her out. Her ambition doesn’t have anything to do with Ariel – she wants to overthrow Triton and rule Heaven (Atlantica). Adding one of the most popular storytelling conventions Satan has going, she operates through the use of contracts that are extremely unfavorable to the signer. She even keeps the tortured souls of her former victims in her yard.

The musical numbers help reinforce the religious themes. The opening number features the entire ocean-ly host gathered together to sing the praises of Triton. The repeated love song is not about Prince Eric himself, but about the whole new world he represents. Eve didn’t want the fruit because it looked tasty: the real attraction was that it was “a tree to be desired to make one wise” (Genesis 3.6). Similarly, Ariel doesn’t just want to be with Eric, she wants to “ask ’em my questions and get some answers!” “Under da Sea” is all about the paradise she lives in and risks losing. And “Poor Unfortunate Souls” pretty much speaks for itself (and causes nightmares). 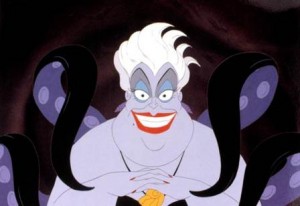 Detailing the similarities of the story is fun. But it’s not the point. The point is the way in which they are different. The reason the conservative religious groups boycott of Disney should have just robustly entered its twenty-first year, instead of fizzling out after less than half of that time, is in the way the story ends.

Ariel’s decision to make a deal with the devil has consequences, as that decision inevitably does. And here they’re pretty extreme: Ursula gains the powers of God, and – in addition to whipping up a serious storm – starts shooting at Ariel. Things look grim, but then Prince Eric drives a wrecked ship into Ursula, killing her.

Let’s think about that for a second. We already know that he’s the forbidden fruit, the manifestation of secular knowledge and defiance of God’s will. And that’s what it takes to kill Ursula.

Not King Triton. He agreed to surrender his power to Ursula in order to spare his daughter, but that’s not much of a choice. From the moment Ariel signed Ursula’s contract he was powerless. God could not save Eve from Satan. But Prince Eric could, because Disney believes that people don’t need God to protect them from the influences of evil. What they need to bring to the fight is knowledge. Eve defied God and had a dangerously close brush with evil, but she survived because she was helped by the very knowledge God had forbidden.

It’s all very Humanist. And that’s what makes the real difference.

Disney gives the Fall a happy ending, because from that perspective it’s a happy story. Mankind escapes ignorance and enters into a world of vastly richer experience. It’s harder, and it’s more dangerous, but it’s for the best. Disney sees that humanity, like Ariel, just wasn’t made for Paradise. And they believe that God recognizes that too. King Triton doesn’t give Ariel legs out of anger, even though the result is that she will leave Paradise forever. He does it out of love, because that is the only life she will truly be fulfilled. There are no curses or punishments. They share a moment of understanding, and then say goodbye, with Ariel sailing into the sunset on the arm of Prince Secular Knowledge.

[Is Sebastian one of the Angels of the Lord? Is there a hidden warning about the dangers of the secular path in the form of Chef Louis? Sound off in the comments!]

31 Comments on “Part Of Your World”