Though America had been increasing its suburban population since the Federal Housing Administration started insuring loans in the Thirties, it took the demand for housing following World War Two to really crank things up. During the Fifties and Sixties, “Levittowns” sprung up all across America. Planned communities, these networks of ranch homes gave middle class Americans access to the dream of nobility – a landed estate – at a reasonable price.

Of course, this new era of opportunity didn’t extend to everyone. The Federal Housing Administration expressly cautioned against extending loans to families of color – in writing – throughout the Sixties. The Supreme Court’s decision in Brown vs. Board of Education in 1954, desegregating public schools, drove families that could afford it to move into pricier neighborhoods. The poorer classes were left in the cities; the middle class on up fled to the suburbs.

Throughout the country, the impulse was the same: get out of the city. 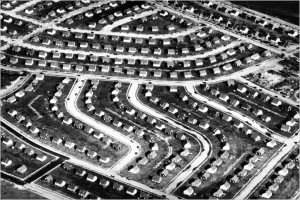 Welcome to the desert of the real.

Why is this? Cities represent one of the human race’s most lasting triumphs over privation. A walled collection of shelters, they provide cheap infrastructure – roads, water, lighting – for all inhabitants. By minimizing communication and travel costs, they encourage the growth of commerce. Cities certainly have their problems: crime, pollution, urban ugliness. But they seem to be a net positive for the species.

Suburbs take the worst aspects of cities and add few benefits in return. Most of the benefits of a suburb are private benefits: the spaciousness of my house, etc. There’s the intangible public good of a nice landscape. But add on top of that the increased cost of powering and watering a pocket of urbanity in the middle of nowhere. And the tendency to cloister oneself in a like-minded ghetto isn’t any better in the suburbs. Suburbs are expensive to get to and expensive to maintain. And the effort of paying that expense creates a kind of mental conformity.

Artists have been railing against the suburbs for the latter part of the Twentieth Century. The suburbs are bland, conformist, bastions of privilege. Richard Yates wrote about the pressure to conform in Revolutionary Road. The Lockhorns, the feuding married couple famous in American comic papers, were originally residents of a Levittown. From Kurt Vonnegut’s Deadeye Dick to Malvina Reynolds’ “Little Boxes,” America’s artistic class has been unhappy with the suburbs for a long time.

In Romero’s initial Dead trilogy, people flee the cities for a farmhouse (on the borders of the suburbs), a shopping mall (the icon of suburbia) and a military base outside the city. However, they brought their problems with them – greed, paranoia, ambition and envious rage. They succumbed to the same bestial group mentality that they had sought to flee in the urban center.

Zombie films took off in the Seventies because they reproduced the “white flight” that America was still undergoing. But they horrified audiences because they suggested that fleeing to the suburbs wouldn’t work. The reason a killer in your house is so scary is because your home is your castle. It blends the familiar – your hall closet, the space under your bed – with the alien Other. Now imagine an army of killers moaning outside your door.

Zombie films petered out in the Eighties, however, not counting some remakes of wildly varying quality. It’s not like people stopped moving to the suburbs. It’s just that the message had been received. The suburbs became places for teen adventure and coming to terms with heartbreak (see the works of John Hughes). No zombies here!

Cheap gasoline is the lifeblood of the suburbs. Without it, the commuting lifestyle isn’t an option. Suburbs are “bedroom communities” – neighborhoods that exist only for people to sleep in and mow the lawns of. As the price of gas rises – which it did several times between 2002 and 2010 – living in the suburbs becomes a source of stress, not relief. How can I afford this beautiful home?

The housing bubble, the effects of which are still being felt in America, has been even worse. Planned communities have been wiped clean, as if by some undead disease, when the credit to build them dried up. Americans were told all their lives that homeownership was not only the key to wealth, but the right of every citizen. Then their mortgage became a burden. Then it became a monster, devouring their life savings and their future plans.

Economic turmoil causes us to doubt the safety of our castles. We rediscover the nagging fear that maybe fleeing the city wasn’t such a great idea. And in these times, nothing scares us more than a well-done zombie story.

Zombie stories terrify the West not because of a fear of disease. It’s not even the fear of death that keeps us clutching our duvets. Zombies terrify us because they suggest that nowhere is safe. We can’t escape zombies. Science says we should be able to – they’re slow! They’re dumb! They’re inefficient disease vectors! But they keep showing up anyway. No matter how high our fences, nothing will prevent a horde of shambling mouth-breathers from showing up outside our door.

Zombies reflect America’s skepticism of the suburban promise. It’s when the suburbs come under assault – either intellectually or economically – that the ghouls come back for more. 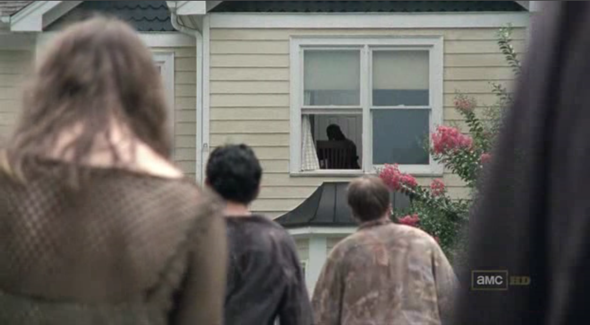 48 Comments on “American Zombie: The Walking Dead and Urban Flight”