AMC’s The Walking Dead capitalizes on the pop culture resurgence of zombies. Though you wouldn’t think it to look at OTI’s back catalog, zombies haven’t always been the most popular horror threat. More to the point, they’ve rarely been very popular. As big as George Romero is in genre circles, his name doesn’t command dollars the way a Spielberg or a Scott might.

But the zeitgeist has brought zombies back around again and, with them, a chance to re-examine the zombie genre.

Though zombies have been present in pop culture since the dawn of the motion picture era, credit goes to Romero for making them a staple. His Living Dead trilogy, which has since expanded into a six-part series, has given us the recognized rules of zombies: their desire for human flesh; their shambling gait; their apparent immortality. It’s also trained us to look for zombies as a means of social commentary. 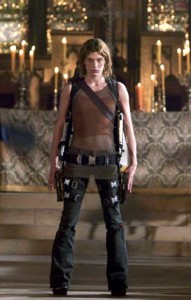 Of which the less said, the better.

The Walking Dead appears to be a return to classic form, however. The primary focus is on the humans surviving a post-apocalyptic scenario, not the many ways to smash zombie skulls. You could cut and paste any end of the world scenario – global warming, pandemic, aliens – and tell the same story. Believe it or not, this is a good thing. Zombies aren’t that rich of a genre trope. They don’t have personality, they don’t have an extensive mythology and they don’t bring out the best in humanity.

In fact, there’s only one unique thing about them.

Of the Romero zombie movies, and of the better zombie stories like The Walking Dead, what elements do they have in common? Let’s consider:

What do all these stories have in common? None of them take place in cities.

Modern pop culture conventions have given us the “zombie disease,” some nebulous plague that infects humans and turns them into emotionless sociopaths. This disease is transmitted by a bite, or by fluid contact, and takes effect quickly. This disease also makes them stronger than normal humans, or at the very least resistant to pain. It instills in them a desire to bite other things, and possibly eat them.

A casual knowledge of how disease works makes this seem silly.

(I owe a tip of the hat to my friend Auston H. for inspiring this line of thinking in me. He made a recent series of posts exploring the nature of the zombie disease trope, which I’d link to if they weren’t on Facebook. Get a blog, Auston!)

Consider the Black Death of the 14th century, probably one of the deadliest plagues in Western history. This infection was spread by fleas and rats, which carried either bubonic plague or (if you believe some new theories) a variant of anthrax from person to person. The death rate in the cities of Europe was tremendous. The fact that germ theory was centuries in the future and that medieval cities were cesspools by conventional standards didn’t help.

And yet the toll was, at most, sixty percent. That’s nothing to sniff at – seventy-five million dead between Iceland and India. A third of Europe’s population dead inside a few years, with some cities suffering a mortality rate of fifty percent. The instigation of a cycle of plague and whole years, as the disease lingered and took new forms. Yet Europe still functioned. Sort of. 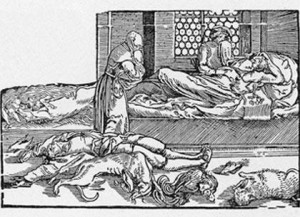 Clearly, mankind has relied too much on Physick! This is our Folly! Quick, let us Immolate some Jews and restore the Natural Order.

The key to a disease’s fatality – its ability to turn into a pandemic – is its incubation period in the host and its vectors of transmission. In every conventional narrative, zombification has a relatively quick incubation period. A few seconds in some cases (28 Days Later); rarely more than a day or so. Most epidemiologists will tell you that that’s way too fast to be effective. The bubonic plague doesn’t show symptoms until two to five days after exposure. That’s plenty of time for the victim to wander around, casually infecting his friends. That’s what makes it so deadly.

Further, a disease which can only be transmitted through fluid exchange – or through a bite – can definitely be controlled. The reason that HIV hasn’t decimated the West, despite its insidious power of turning the body’s immune system against itself, is that some simple precautions can dramatically reduce the risks of it spreading. Zombism is similar. It’s not hard to keep someone from biting you.

So zombification doesn’t make biological sense. If this were a conventional blog, I’d smack the dust off my hands and call it a day. But you’re reading Overthinking It. One of the key elements of Overthinking It is taking genre elements as intentional.

Zombification probably could not spread through biting or fluids. So why claim that it does? To make us fear the zombie horde. 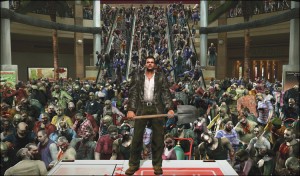 Anyone else get really frustrated at this game?

It’s not the lone shambler that we have to worry about. It’s the mass of monsters. It’s a thousand people marching toward us. They can crush us under their dumb weight or rip us apart with their hands. Even if we have a gun, that gun has to run out of bullets some time. And when it does, we’re joining the mob.

This is why so few zombie movies take place in cities. Cities, as the centers of densest population, are likely to be the greatest concentration of zombies. They’ll clog the streets with their numbers. Every person they kill will only swell their ranks. In every good zombie movie of the modern era, the refrain is the same: get out of the city. Get to the countryside. That’s where you’ll be safe.

If you consider this for a few moments, though, it doesn’t make any more sense than our earlier theories on zombie transmission. Sure, cities will be full of zombies. They’ll be packed to the fences. What happens in any hunting ground that’s overpopulated with predators? The predators inevitably die off or move on. You can wait up in your concrete fortress for the hordes to dwindle to nothing, then take to the streets.

“But what about food? You can’t grow food in a city.” Maybe not, but this is true of any place in America. Unless you live on one of the country’s remarkably few family farms, you do not have the capability to grow a sustaining diet. You need to get your food the same place everyone else does – the store. And no one imports more food than cities. Your odds of successful scavenging are much higher in an urban center than in the sparse surroundings.

Everything you need to survive – food, water, medicine, tools, weapons, shelter, clothing – will be easier to find in an American metropolis than outside of a city. Yes, you’re at greater risk of meeting a zombie. But zombies are only one of the things that can kill you in zombified America. Dehydration, tetanus and snakebite are still on that list too. 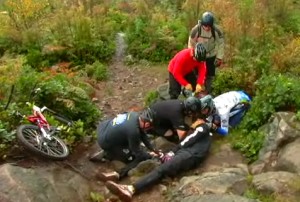 But nobody thinks they’re wrong. In Dawn of the Dead, the protagonists take a helicopter and flee the city for a suburban shopping mall. In 28 Days Later, the main characters flee London to follow an intermittent military broadcast. In The Walking Dead, the survivors camp outside Atlanta on an unfortified hilltop, rather than find a secure position.

Survivors just feel safer outside of cities than in them.

48 Comments on “American Zombie: The Walking Dead and Urban Flight”