Either way, I make no excuses for finding what I found. Come with me on a romantic walk along the shore and let me unpack these economic themes for you. 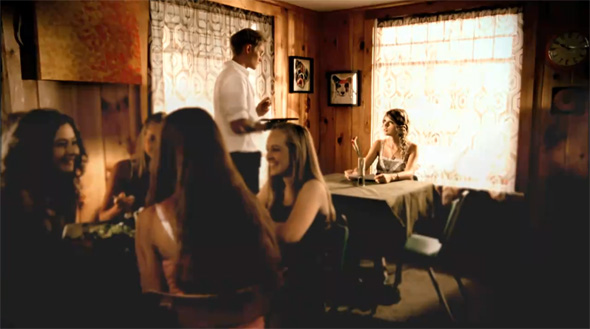 The visual language of this video strongly suggests that BWG is a typical blue collar, Joe Six-Pack kind of guy. He waits tables and has scruffy hair, both on his head and chin: 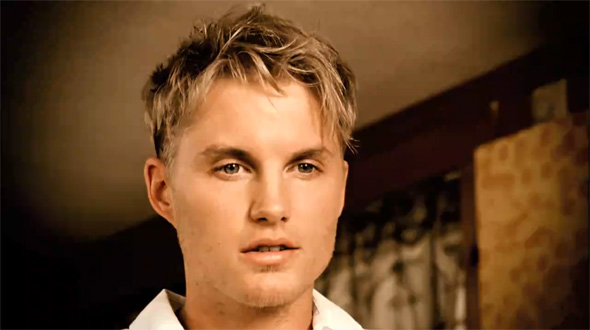 But the song’s lyrics add an important detail: he’s in college.

You were in college working part time waiting tables

Now, a college education may not be anything special to the OTI demographic, but in the context of the general American population, it is. As of 2005, only a 28% of adult Americans had a bachelor’s degree, and among white, native-born Americans, that rate is still only 38%.

BWG is positioning himself for above-average socioeconomic achievement, but for now, he’s stuck waiting tables to presumably help pay his tuition and support himself. Granted, these two facts aren’t at odds with each other–countless others have gone this route–but presenting them together, along with the way he’s visually depicted as an everyman, speaks directly to Americans’ economic insecurities. He aspires to rise above his background, yet still struggles and lacks any sense of security.

He’s even without the security of his hometown:

Interestingly, the visuals betray this notion of leaving a small town for something bigger. Everything in the video suggests a small coastal town and not the urban jungle that small town BWGs typically escape to. But the fact that it’s coastal is still significant:

Do you remember we were sittin’ there by the water?
You put your arm around me for the first time 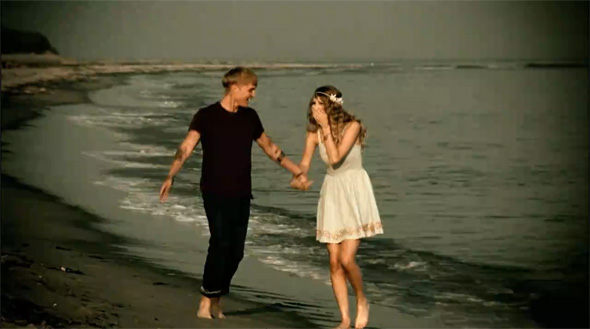 Not just because that’s where Swift and BWG had their first, um, arm-putting-around session, but because the coast signifies distance and separation from the American heartland. Still, this is a safe, small coastal town and not a threatening coastal metropolis. BWG, like America, has opted for change in response to economic distress, but a fairly safe and superficial one at that.

Likewise, when Swift says she’s been made a “rebel,” she seems to endorse change in response to hard times, but in the video does very little that can be considered rebellious or radical. Perhaps it’s the fact that she appears to have moved in with BWG prior to their marriage, but in the latter part of the video, she’s shown leading an exceedingly typical middle class life, raising kids while her husband’s off at work.

And to cap it off, she uses the decidedly conservative concept of private property ownership to describe her affection for BWG. In doing so, she reveals how she–and in turn, America–still put a great sense of importance in property ownership. Part of this is a reaction to the home foreclosure epidemic that dispossessed thousands of Americans from homes that they thought they “owned.” Another part of this is the perceived shift towards “socialist” economic policies–health care reform, bank bailouts, higher taxes–that conservatives fear are undermining capitalism and the sense of individual ownership of both property and economic destinies. Hence both the reassessment of what one considers “mine” and the increased value one places in those things–or people, in this case.

Back to this notion of Swift as rebel:

Flash forward and we’re taking on the world together

Again, there’s nothing in this video that really signifies rebellion or conflict against “the world,” unless you consider harsh economic circumstances as “the world” that they’re taking on together. But it’s not like they’re trying to establish the dictatorship of the proletariat. No, they’re just trying to fight for their piece of the middle class status quo, which further reinforces both the irony of this Swiftian notion of rebellion as well as America’s lack of propensity for truly radical change in response to economic turmoil.

So how do they fight for that piece of middle class status quo? By struggling to pay the bills and make ends meet, naturally:

Their lack of a plan is both an expression of their obvious youth and inexperience as well as a frank admission of how America also has “nothing figured out” when it comes to its own “bills to pay.” (A bit on the nose for a Taylor Swift song, I know. Most of the economic metaphors are buried deeper in the text, but this one was pretty much there for the taking.)

The young couple manages to stay happy in times of economic hardship, but what happens when BWG gets a good job?

Apparently, the bridge goes to a minor key and they start to fight: 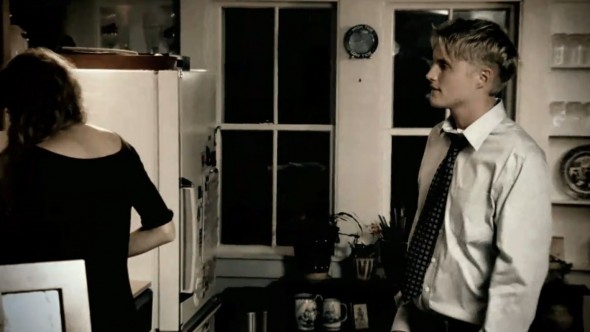 Sometimes a tie is just a tie. But this is not one of those times. (Neither is this. In fact, come to think of it, a tie is rarely ever just a tie…) In this case, it’s the symbol of BWG’s attainment of a college degree, a white collar job, and some level of economic stability. But all of this can’t prevent emotional turmoil:

And I remember that fight 2:30 AM
You said everything was slippin’ right out of our hands
I ran out crying and you followed me out into the street
Brace myself for the goodbye
Cause that’s all I’ve ever known

This scene is clearly meant to mimic Swift’s flashback to her parents fighting in the kitchen, both thematically as well as visually: 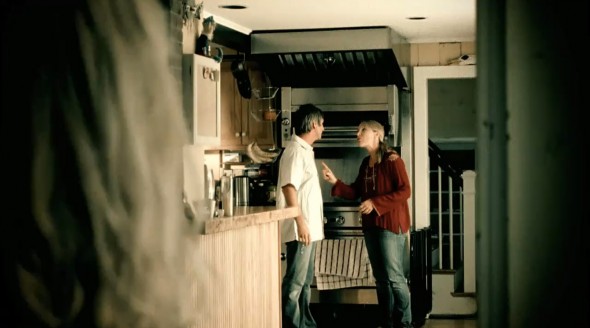 At this point, I would have loved it if the story continued its dark bent and turned into a cynical admission of capitalism’s faults and the inability of material wealth to provide what people really need. But this is a Taylor Swift music video, and this is a Taylor Swift song that’s all about having your cake and eating it, too: Joe Six-Pack everyman gets a college education. The escape to a coastal town is both distant from and close to the heartland that BWG abandoned. Rebellion against the status quo feels like taking on the world but is in fact doing exactly what the world expects of you. And so it ends: 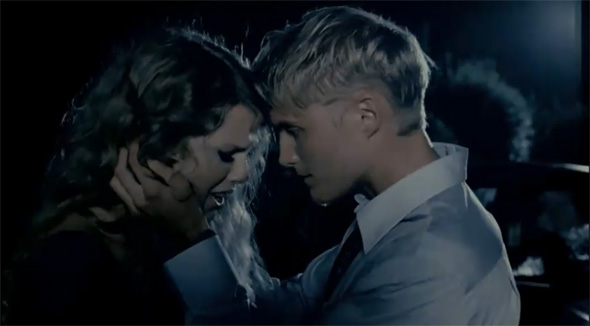 Swift and BWG avoid the mistakes of those that went before them and go on to raise happy little white kids: 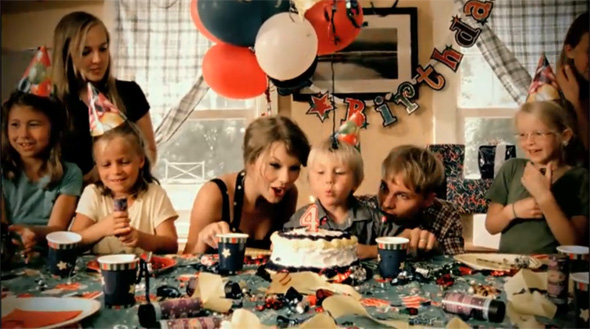 Or do they? Notice the use of the future tense in the song’s outtro:

Do you believe it?
We’re gonna make it now
And I can see it
I can see it now

This leads me to believe that everything that happens in the video after the fight (the wedding and the kids) is Swift imagining what their future will be like from that point. Which both fits with and oh-so-subtly undermines the “have your cake and eat it too” mentality that runs through the rest of the story. In other words, yes, we can have it all…or at least in my impossibly perfectly imagined future, we can have it all.

16 Comments on “The Musical Talmud: Economic Themes in “Mine” by Taylor Swift”