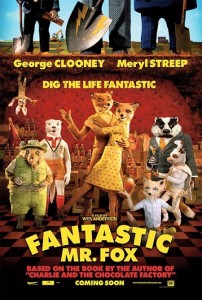 Let’s get this out of the way first.  Fantastic Mr. Fox is about penises.

There.  I said it.  Fantastic Mr. Fox is about penises, and there’s nothing you can say to convince me otherwise.  Look, I had wanted to start this post with a really good, academic-style introduction about the relationship of Wes Anderson’s new film with the works of postmodernist Don DeLillo.  Then I thought, No, I should start by talking about Marxist notions of proletarian alienation.  Then I thought, No, actually, the Durkheimian concept of anomie might be more appropriate in this context.

But these subjects, while related to the following article, are mere branches growing off the main shaft of this post.  The long and short of it is, this post is about penises.  Say it with me, kids.  Fantastic Mr. Fox is about penises.

Now that that’s out of the way, let’s let out a deep breath and do some overthinking.

The Castration of Mr. Fox

Fantastic Mr. Fox is about a man-fox who used to be a chicken thief.  He believed it was in his nature to snatch chickens, and he was (mostly) quite good at it.  However, when his wife became pregnant with their first child, she made him promise to find a safer line of work.  To escape from certain death, he and his wife dug into the earth and created a burrow for themselves.  Mr. Fox started writing a newspaper column he was sure no one would ever read.

All of this, of course, leads to Mr. Fox’s castration.

Well, not castration, really.  Mr. Fox doesn’t literally lose his genitalia–but he does lose the next best thing: his tail.  A tail is one of things that makes a fox a fox.  This is especially important to a fox that wears human clothes, speaks a human language, and writes for a newspaper.  His tail is his link to the natural world.  It reminds Mr. Fox who he really is under all the cultural trappings.

But then he gets his wang—er, tail—shot off.  You may be wondering why I keep saying that his tail is his penis.  It’s not only because they are vaguely the same shape.  It has more to do with everyone’s reaction to its loss.  Look closely at the expression on Mr. Fox’s face every time something horrible happens to his tail.  If that’s not the look of a man wincing as he watches the mangling of a penis, I don’t know what that look is. And when Mrs. Fox sews up Mr. Fox’s behind after the accident, notice his expression of utter embarrassment.  Not only did he just lose the best symbol of his masculinity—he’s having it patched up by his wife, who is engaging in the particularly feminine act of sewing.  No wonder Mr. Fox says he doesn’t want to talk about it any more.

We should also pay close attention to Mr. Bean’s use of the tail after he shoots it off.  Does he throw it away?  Does he hang it on his wall as a trophy?

This is the action that best encapsulates the struggle at the heart of the film.  A tie is already a phallic symbol.  Men wear ties, not women, and the shape resembles a (large) human phallus.  A tie made from a wild animal’s tail—and one that you just shot yourself, no less—would likely be the most masculine type of tie you could wear.  (It would also be quite embarrassing to the now-tailless fox, assuming he was sentient and aware of the symbolism.) 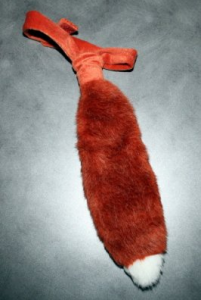 You too can wear a phallic symbol to your next workplace retreat!

What’s interesting, though, is that a tie is not only a symbol of male virility; it is also a symbol of the workplace and of polite society.  One doesn’t wear a tie just anywhere.  One wears a tie to work.  Although Bean did manage to shoot Mr. Fox, Bean is not presented to us as an icon of wild manliness.  He, like the other farmers, is a businessman, a factory owner, a possessor of the means of production.  He uses large machines in an attempt to destroy Mr. Fox and his other animal companions.  In Bean’s new fox tie, then, we see one aspect of the main conflict of the film: the conflict between wild, natural masculinity (tail-tie as penis) and the neutered alienation of the postindustrial workplace and society at large (tale-tie as a symbol of culture and capitalism).

Of Wolves and Men

What happens after Mr. Fox loses his tail gives us a deeper insight into his character and into the themes of the film overall.  After the community burrows into the dirt to avoid the farmers’ digging machines, and after Mr. Fox’s nephew, Kristofferson, gets captured by Mrs. Bean, Mr. Fox realizes there is only one thing to be done.  He and the rest of his community must reject their human-like careers and (slave?) names and take on their scientific, “natural” Latin names.  Mr. Fox argues that what is truly fantastic about his community of animals is that each of them has a natural, in-born talent.  They must return to their wild forms and work together to save Kristofferson and destroy the unnatural human overlords and their machines.

In short, Mr. Fox is overcompensating.  He’s essentially saying, “I don’t need my tail/penis to be a man.  I’m a wild animal, with or without my junk.  And what wild animals do is give into their physical natures and fight.”  No wonder Mr. Fox’s son, Ash, is so screwed up.  Ash understands that his father, bereft of his own masculinity and trapped in an antiseptic, human-like society, overcompensates by subtly berating anyone who is not naturally athletic enough.

Now, the main reason I love this movie, besides the humor and awesome animation, is that Wes Anderson and Noah Baumbach don’t give Mr. Fox a true happy ending after he makes this decision.  I could easily imagine another version of Fantastic Mr. Fox that had all of the animals tearing off their clothes, giving into their animal instincts, and overthrowing the unnatural humans and their machines. 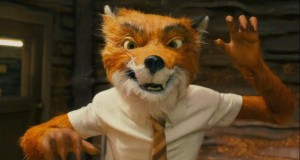 But that doesn’t happen in this movie.  The ending is much more ambiguous.  Mr. Fox and his friends do use their natural animal abilities to get into the farmhouse, and Ash does use his “natural” athletic abilities to recover his father’s tail.  However, Kristofferson is saved not by Ash’s physical prowess but by luck—the cage falls to the ground and breaks.  Mr. Fox’s tail-penis is rescued, but it is mangled beyond recognition.  Mr. Fox does defeat the Rat, but he does not defeat the farmers.  The animals cannot return to their natural homes on the surface; they must stay in the sewer and, later, in a supermarket—two man-made homes, one full of human waste and one completely antiseptic.  In some ways, Mr. Fox’s stupid masculine impulses have doomed his family and his friends.

The ambiguity of Mr. Fox’s decision to give into his natural, wild impulses can also be seen in his relationship with the Wolf.  Throughout the film, Mr. Fox shows that he is afraid of the Wolf.  “Wolf?  Where?!” Fox says, cowering with eyes wide open.  The Wolf is described as the wildest, most frightening, and yet most beautiful creature in the world.  Mr. Fox fears the Wolf and yet wants to be exactly like him.  We can thus say that Mr. Fox fears pure, wild masculinity yet also yearns to own it himself.

After Mr. Fox and Ash save Kristofferson and Mr. Fox’s ruined tail, Mr. Fox actually does meet the Wolf, his masculine ideal.  Significantly, Mr. Fox cannot speak with him.  The Wolf, being the representation of pure wildness, cannot speak English (or French, or even Latin—which is important, because it means that Wolf cannot even understand his own “scientific” or “natural” name, which is of course as culturally-determined as the names “Wolf” and “Mr. Fox”).  Mr. Fox does pump his fist at the Wolf to say, “Fight the Man,” but that is all Fox can do.  His wife is pregnant again; he cannot live in the wild world of the manly wolves.  He can only learn to survive his neutered life in the suburbs.

And the Moral of the Story Is…?

At heart, then, Fantastic Mr. Fox isn’t really about penises but about this question: “What does it mean to live according to your nature?  And, if you can’t, what do you do?”  At one point in the film, Mr. Fox says that, typically, what a fox Does (with a capital D) is steal chickens.  This is masculine and involves the fighting urge, so it makes sense that the alienated Mr. Fox would cling to this meaning of Fox-ness.  (It’s also of note that, at the same time that he decides to go back into chicken snatching, he decides to move into a giant tree—another phallic symbol—in the most dangerous part of town.)

What do foxes Do?  Mr. Fox says they steal.  Mrs. Fox, however, has other ideas.  What foxes do best, she says, is dig.  They make holes (vaginas) in the earth, which is typically associated with the feminine.  Hole-digging is part of the flight, not fight, response.  This notion of Fox-ness appeals to Mrs. Fox, who seems to be a secret worry-wart—she spends her days painting idyllic landscapes that are being destroyed by lightning.  Although she admits she is attracted to Mr. Fox’s wild masculinity, she does not believe she should have married him.  Women-Foxes Are From Holes, Men-Foxes Are From Trees. 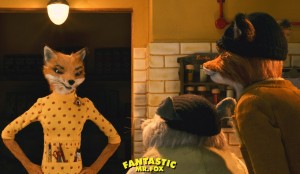 While most children’s movies espouse the easy moral of, “Be Yourself,” Fantastic Mr. Fox is about what “Yourself” actually means.  Is Mr. Fox really being true to himself when he is acting like what he considers to be the typical, natural fox male?  Or is he simply overcompensating after his literal (at the hands of Mr. Bean) and figurative (at the hands of his wife and of society) neutering?  Is a fox naturally more like the wolf or more like the human?  Does being a man mean fighting the Man and using your physical abilities, or does it mean being a good husband, father, and member of the community?  Is the point of being alive to survive for as long as possible, even if it means hiding scared in a neutered, antiseptic, or (ew!) feminine society, or is it better to live on the edge even if it means dying young?  Entertaining though it is, Fantastic Mr. Fox gives us no easy answers, which is why, so far, it is my pick for the best movie of the year.