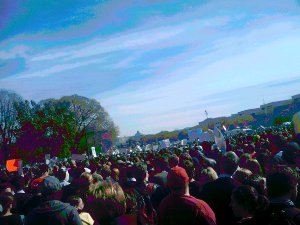 The crowd leaned slightly to the left.

I spent the weekend at the Rally to Restore Sanity and/or Fear with my sister in Washington DC. While I don’t usually talk too much about politics on Overthinking It, I figured the event warranted some discussion, because, in addition to being politics, it’s pop culture, it’s important, and it’s illustrative of its cultural moment. Like Lee did for ComicCon, I’ll add more, better pictures in a future entry — expect more talk about my experiences here, because it was a really complex event and fun to think and talk about.

I want to start with Jon Stewart’s keynote speech, because it’s packaged in such a way that it’s easy to talk about, which will create the impression in history that it was also the most important part of the rally, so let’s go with that reading for the moment (thanks to chapterofmylife for posting in good quality, if it stays up long enough for everybody to see it):

Stewart has long ground this specific axe as his most urgent and sincerely political position — through the 24 news cycle and journalotainment (my word, but if he can use “conflictinator,” indulge me) the press manufactures alarm and choreographs conflict while overlooking substance and responsibility. The press serves an essential function in a democracy — Stewart refers to it as our “immune system.” So, when the press falls asleep at the wheel or turns on its duties (one could say when it “shirks” its duties, but in my opinion this ascribes less systematic malevolence and corruption to the much of the press than is accurate), the results are bad for the country and the world.

It’s the same thing Stewart talked about way back on the now-defunct-but-quaint-by-comparison-to-today’s-propoganda-horrors Crossfire six years ago, when he came into his own as a political force:

More on Stewart’s avowed politics, the politics of the rally, and the politics of art and festivals (because, despite not being seen as such by many, this was a comedy and arts festival), after the jump —

Jon Stewart and his posse hosted a big rally where they got people together for reasons they don’t entirely understand. This much is clear. It is also clear that Stewart’s most deliberate intention in all of this – the fire in his belly that got this whole thing going – was to demonstrate opposition to the destructive tendencies and dereliction of duty in contemporary popular media. Unfortunately, and I’d wager as a comedian Stewart understands this, because comedians understand more than most the futile demands of the sane mind — he almost certainly isn’t going to win.

This is very important for how the rally functioned and what I think it means, so I’ll go into it a bit, at risk of being too political. I apologize if my ranting is discourteous to any of our readers in their own political commitments.

Actually, I’ll remark on that for a second, because this was very obvious at the rally if you actually went rather than read the half-pre-scripted coverage in places like the New York Times. This was very much not a Democratic rally. Stewart never talked about the midterm elections. The big guests were not politicians, but musicians. There was no call to action involving getting out the vote. There wasn’t even an endorsement of one political party over another by the people running the rally (the attendees, well, we’ll get to that). Anybody who expected this to be some sort of October Surprise for the Congressional Democrats must have been sorely disappointed.

The media organization bashed the most by the rally itself was not Fox News but NPR, for its overreaction to Juan Williams’ rude but harmless comments (more than one person I talked to found the references to it more than a little conspicuous — so it isn’t just me).

Media outlets widely seen as liberal were given the first Medal of Fear by Steve Colbert for their unwillingness to cover the rally so as not to appear biased, which casts light on the media outlets’ own self-conscious political machinations that interfere with their objectivity and ability to do their jobs.

If the rally was driven by Democrats, it wasn’t very nice to its supposed friends.

I think the issues Stewart and Colbert discussed are somewhat party-neutral. Yes, there is conspicuous alignment between Republican leadership and the media outlets it controls, but that leadership doesn’t speak for all Republicans, and not all the people voting Republican on Tuesday are willing to call themselves Republicans. It’s unfortunate what will happen to the agenda of fiscal responsibility once the election is over and the Republican semi-dependents realize the people who control their party aren’t really very conservative in their economic and fiscal policies, but, hey, you can’t blame them for trying to change things, and metadiscourse doesn’t inherently prefer one tax policy over another.

If I were a conservative — though I confess I’m not on balance, even if I am on some issues — I think I’d want a free and independent press that felt responsibility for accurate reporting and some dignity and perspective rather than self-destructive, nonstop myopic hysteria.

I’d want to know what was really happening so I knew how to adjust to it and help formulate and work toward constructive, responsible, low-cost solutions  that didn’t impinge on people’s liberties too much, or so that I could work toward solutions to problems through the institutions I believed were appropriate for addressing them. The need for a free press isn’t diminished whether you prefer social policy to charity or the military to the State Department – it’s something the members of both parties should be interested in, and a bit of a prisoner’s dilemma, where it has become a dominant strategy to destroy it that has resulted in a net negative for everybody.

(The previous example, of course, relies on the extent to which knowing what is “actually happening” is possible, but seeing that I am a conservative in this scenario, I’m probably not going to invoke Baudrillard’s Simulacra and Simulation while watching the news).

Back to Stewart’s uphill battle

Okay,  so, we’re still talking about Stewart’s speech at the rally here (writing thousands of words about 15 minutes of a daylong rally, yeah that’s overthinking), and really just the salient points at the heart of it. The two-party system isn’t put forth as a solution. The media certainly isn’t put forth as a solution. Stewart doesn’t say “keep listening to me and watching my show and I will fix this.” Stewart articulates a problem, but the solutions he proposes are the sort that people don’t tend to do on their own — like being good friends and neighbors, turning off their TVs and going outside, and calming down and being adults about things. It’s like telling somebody they really should eat healthily — yeah, they should, and some will, but most won’t, because the economic fundamentals are too strong.

The rally isn’t going to solve Stewart’s problem with the press — it’s not even going to come close to solving the problem. The economic fundamentals are too heavily stacked against it. The profit motive for media organizations to keep going the way things are dwarfs what they can make just producing news. They can make a lot more money — for their own books, for their own pockets, and through various complex business relationships — selling de facto editorial control of news outlets to private companies (that will turn profits by influencing government policy) than they can make selling time to the Pine-Sol lady and the Scooter Store.

It turns out the market has been undervaluing control of the government (mostly in terms of short-term payouts in taxes and contracts – not really thinking about the long-term health of the economy, because hey that stuff is CRAZY, amirite?) at a time when media is relatively cheap and easy to produce and distribute and media professionals are suffering a ton of underemployment, a big influx of new skilled workers, a nosedive in the cost of basic technology and downward wage pressure. These sorts of adjustments – where prices move and shift buying and selling patterns, are notoriously difficult to fight or reverse. The markets are very very powerful.

As a result, formally private institutions that are virtual arms of government entities heavily influence what is said on the news through a series of think tanks, astroturf groups and PR organizations. Those same organizations overtly fund the television stations and other media outlets by becoming a major source of ad revenue (one of the few growing ones). In turn, being free of the responsibility to produce news in line with journalistic integrity (which is expensive) lets them operate with skeleton crews of underpaid staff while making only sensationalist stories, which people will gravitate toward watching.

To give you a sense for the extent of this media/political machine Stewart is calling out, they even channel funding and influence to sites like Overthinking It through institutions like Google Ads, which we can’t control and have no better alternative to at our scale and level of operations (with our whopping zero full-time employees and reliance on donations to keep our servers going even with advertising all over the place).

For example, while the people at OTI are of varying political persuasions, we all have gay friends (mutual ones, whom we pretty much all know and care about their rights), and we didn’t want to show you ads that tell you to oppose gay marriage or be scared of gay people back when Prop 8 was kicking around. But we didn’t really have much of a choice – we can’t censor the ads on our sites, and there are no other advertisers that work for us at our current level of sophistication and readership.

The people that control the media, whom Jon Stewart opposes, make us show them, so we have to. Thankfully, our mandatory political advertisers don’t really care if we insult them to their faces; we’re not important enough. So, when a particularly pernicious issue comes up, we come out and say on the site – “Hey guys, we’re sorry about that one, don’t pay attention to it, those people are jerks” and that makes me a little more comfortable with the whole rotten business.

Still, every time I see another one of those goddamned push polls on the site I grind another layer of enamel off my molars.

But yeah, I understand why Jon Stewart hates this kind of media, but I don’t think this rally is really going to do much to stop it, or even slow it down. And I don’t think that’s why we all gathered on the mall in Washington, either.