This Open Thread contains 70% post-consumer waste. Because we care.

The big news in the States this weekend: the dual Jon Stewart / Stephen Colbert rally in D.C. this weekend. Entitled The Rally to Restore Sanity or The Rally to Keep Fear Alive, depending on which pundit you follow, it promises to be, well, loud and full of white people. Sheryl Crow, The Roots and the lead singer of Wilco are slated to perform. 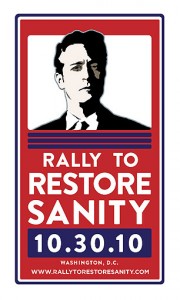 Cthulhu's 'Rally to Cost You 1d100 Sanity' was not as well attended.

The most anticipated TV event for zombie fans comes this weekend, with AMC’s premiere of The Walking Dead. SPOILER ALERT: it’s the humans, who descend into savagery when confronted with the depleted resources brought on by a zombie apocalypse, who are the walking dead. Heavy stuff. Meanwhile, you can’t pay CBS to cancel Two and a Half Men, no matter what Charlie Sheen does.

Movies this weekend: Paranormal Activity 2, Saw 3D and the final installment of the Girl Who trilogy. The Swedish version, that is.

And, finally, thanks to our web hosting provider A2 Hosting for their help this month. We were lucky enough to see sustained high traffic unprecedented in the history of the site. Though we had a few bumps, the folks at A2 helped smooth out the worst of them.

Could Charlie Sheen get a million zombies to attend his Rally To Eat Braaaaaaaains? Or is there something we missed? Sound off in the comments, for this is your … Open Thread.