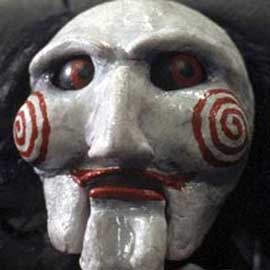 Updated: I added a new section to the end of this article, after the release of Saw 3D.

To understand the Saw series, all you have to do is look at the production company’s logo. Before each film, the words “Twisted Pictures” are ensnared by coils of nasty-looking barbed wire. Then they are impaled by a metal spike. Then the metal spike is rotated, tightening the wire and gouging deep scars in the poor letters. In less than ten seconds, this animation encapsulates the series’s infamous modus operandi: horrible pain is inflicted with low-tech tools, and we’re forced to watch. Twisted.

But think about the other meaning of the word “twisted”: as in, “full of twists.” This is far and away the most plot-heavy, convoluted horror film series ever. It’s not an exaggeration to say you stand no chance of understanding the later films without having seen the earlier ones, preferably only days before. (I recently watched all six in less than two months, and I still found myself heading to the IMDB message boards to figure out what was going on.) Seemingly minor characters return in later films, suddenly thrust into the spotlight. We flash backwards and forwards, revisiting the events of past films from multiple angles. And through it all, there’s the killer’s teasing insistence that he’s building to SOMETHING; that each death is another piece in a master plan.

The people who know the Saw movies only from the advertisements assume their appeal is the twisted traps. But for the fans, it’s the twisted PLOTLINES that has us counting the days until Halloween.

[Note: Saw spoilers follow in great quantities. Since I’ve found the series enormously entertaining, I advise anyone who’s not fully up to speed to bookmark this page and come back when you’re Sawed up.)

If you’re a Saw virgin who ignored my warning and kept reading, first of all, don’t try that stuff with Jigsaw. It tends to end poorly. Secondly, you’re probably thinking, “C’mon Matt, they’ve pumped out a Saw sequel every Halloween for the past seven years. The only way you make movies that quickly is if you’re letting the interns write them for college credit. How tightly-plotted could these films possibly be?” Well, here are some examples:

Not impressed yet? The following is a chart I’ve compiled from this Wikipedia page, showing all the characters that appear in more than one Saw film: 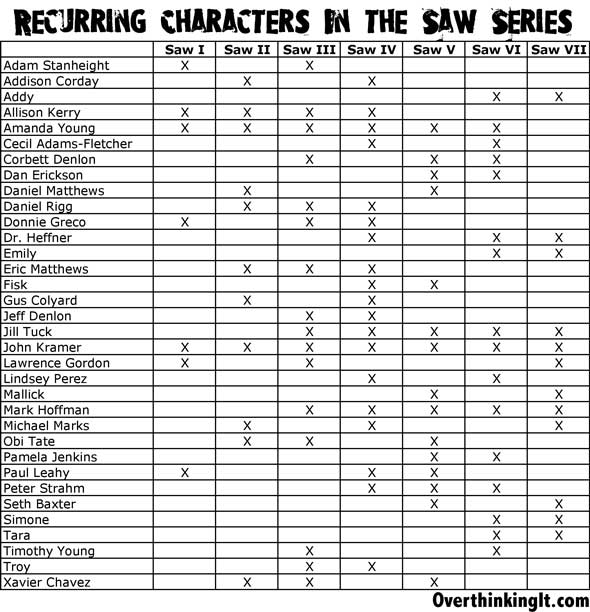 There is no other horror film series that comes anywhere close to this kind of unified narrative. The Friday the 13th and Nightmare on Elm Street movies weren’t building off previous installments. The Final Destination movies, released concurrently with the Saws, were basically a series of remakes. The Scream movies had some continuity, but they certainly weren’t that complex, and there were only three (soon to be four, but that’ll be a reboot). Generally when it comes to slasher flicks, you keep the villain the same, but rotate in a new cast of pretty young lambs to the slaughter. The guys behind Saw didn’t get that memo. 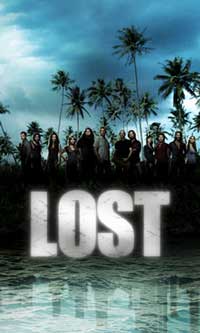 Hello Jack. I want to play a game.

I think to understand the Saw movies, you have to consider another cultural phenomenon that came on the scene in 2004: a little show called Lost. The lesson everyone in Hollywood took from JJ Abrams’s runaway success was that audiences could be enthralled, not repelled, by huge mysteries that unfolded over years. The fans gathered online to obsess over theories and details, the more obscure the better. The Saw producers took this lesson to heart, and built the Saw sequels to be full of twists, complete with Lost-esque flashbacks and lots of loose ends. Want to know what’s in that mysterious wooden box that Jigsaw leaves for his ex-wife? Tune in next year.

At the end of Saw I, Dr. Gordon (Cary Elwes’ character) staggers away, dragging his bloody stump behind him, to bring police to the Bathroom of Doom in time to save Adam, whom he’s just shot (if you haven’t seen the movie, that sentence will seem strange). We know from the discovery of Adam’s rotted body in Saw II that help never arrived. However, we don’t learn what actually happened to Dr. Gordon after he left that room… until Saw VII (aka Saw 3D), when Cary Elwes makes his triumphant return. The series moves forward by looping backwards.

Just FYI: there are no similar message boards about I Still Know What You Did Last Summer. 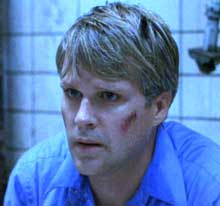 The Princess Bride was a long time ago.

Now, I don’t mean to give anyone the impression that the Saw series is a masterpiece of screenwriting craftsmanship. Clearly, when they made Saw I, the creators didn’t know that Jigsaw was working with the assistance of two, maybe even three accomplices. Saw II started out as a completely non-Saw-related story before being adapted into a quickie sequel. This kind of after-the-fact plotting leads to some inconsistencies that can’t be explained away. For instance, Jigsaw explains in Saw III that he despises murderers. But Amanda Young’s trap in Saw I requires her to murder. As part of Dr. Gordon’s trap, his wife and daughter are supposed to be killed if he fails. These make for dark “What would YOU do?” thrills, but there’s no way to square them with the Jigsaw we see in later movies. For instance, in Saw II, even though it seems like Detective Matthews’ son is in mortal danger, he turns out to be perfectly safe all along. Jigsaw might use the innocent as pawns, but he never makes them victims.

But even if every detail doesn’t add up, it’s worth celebrating how this series swings for the fences, when it doesn’t really have to. The studio would have totally accepted, and perhaps preferred, a series in which each installment stood on its own. Certainly, if you watch the trailers for these movies, they’re always marketed as, “It’s Halloween – come see some sadistic traps!” But the producers either believed that a complicated plot would hold an audience’s attention after the novelty of the traps had faded, or they just wanted to do it even though they didn’t think it was a smart business decision. Either way, I tip my creepy clown mask to them.

But the narrative complexity is only half the story. There’s also the surprising depth to the villain, John Kramer, aka Jigsaw. Horror movie bad guys usually fall into two categories: psycho killers (Michael Myers, Leatherface, the miner from My Bloody Valentine who kept throwing his pickax at me in 3D) and vengeful ghosts (Freddy, Jason, the creepy girl from The Ring who continues to haunt my dreams). Jigsaw was designed to be something new.

37 Comments on “The Shocking Complexity of the Saw Movies”