A while back, I posted a deconstruction of the cover art for the Journey album Escape, hoping that it would be the first in a new series called “Album Covers That Blow My Mind.” Well, a year later, that second entry is finally here! I know, it’s been a while, but don’t worry, it was worth the wait.

Ladies and gentlemen: Meat Loaf’s Bat Out of Hell. 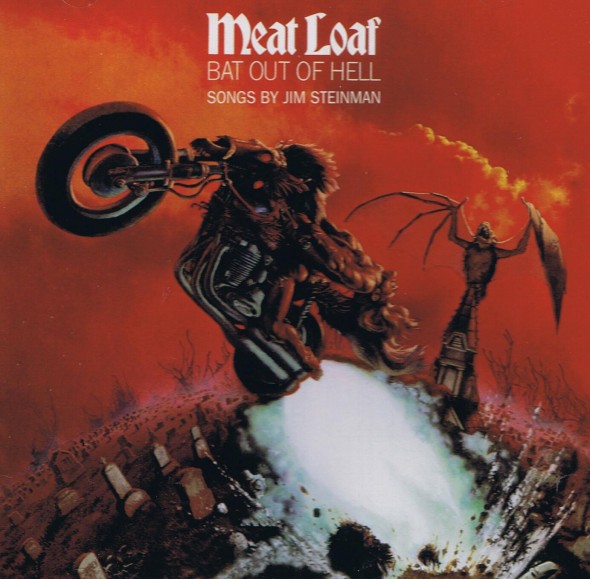 I know, your mind is blown, right? Once you’ve recovered, follow me after the jump to Overthink the Hell out of this.

Fortunately, we actually know a fair amount on the origins of this spectacular image. According to “Q Magazine: The 100 Best Record Covers,” Jim Steinman, who came up with the album’s concept and wrote the music, acquired the services of artist Richard Corben based on his track record of sci-fi and fantasy art. Everyone knew what they were getting into with this project. In other words, it’s no accident that a naked, muscle-bound man rocketing out of hell on a horse-motorcycle appears on the cover of this album.

But we’re not there yet. Let’s take it from the top, specifically, with…

The choice of font for “Meat Loaf” seems obvious at first. You probably have a similar font on your computer, and you probably used it when designing your Halloween Party invitations. It’s a type of “Gothic” script, so named because it came from the parts of Europe that the Gothic tribes inhabited, and also because the Italians who coined the term considered such people to be “barbaric.” Somewhere along the line, the term “gothic” came to encompass broad swaths of medieval European culture, and when the castles associated with medieval European culture crumbled and became ruins, people began to associate “gothic” with the supernatural, darkness, and melodrama.

That’s a super-truncated history of the phrase “gothic,” but you get the idea. If you call an album Bat out of Hell and fill it with epic,  melodramatic songs, you want to create the appropriate imagery to go with it, and part of that imagery is an awesome font.

But wait. Why is “Meat Loaf” in the awesome gothic font, but “BAT OUT OF HELL” in a boring, nondescript san-serif typeface?

Here we begin to examine this album’s relationship with our good friend, irony. Lest you think that this combination of art and music was done entirely seriously, remember this: of course there’s going to be some level of irony when the name of the singer on your album is called MEAT LOAF. I mean, when you think of Meat Loaf, either the man or the dish, the words “gothic” and “awesome” don’t immediately jump to mind: 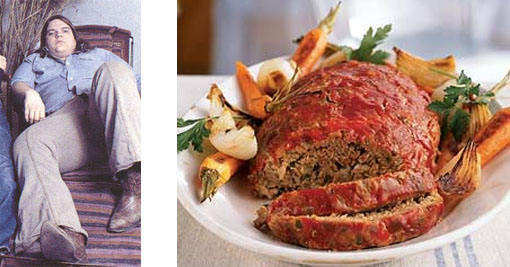 If you’ve listened to the album, and I hope you have, you’re well aware of the ironic, over-the-top nature of the lyrics:

I want you, I need you
But there ain’t no way I’m ever gonna love you
Now don’t be sad
‘Cause two out of three ain’t bad

Given this overall mood of the album, then, it’s no surprise that the name “Meat Loaf” gets the goth treatment. It’s meant to be ironic.

I wonder if anyone let Richard Corben in on the whole irony part. More on that later.

So now that we’ve explained the selection of fonts and found our first hints of irony, let’s move on to the substance of this fantastical scene, starting with… 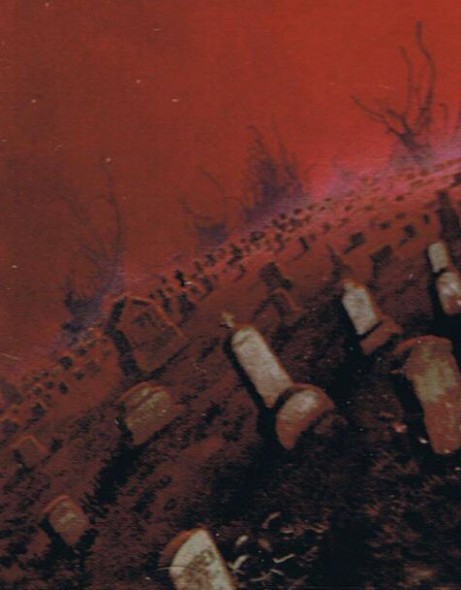 Why are there graves in hell? 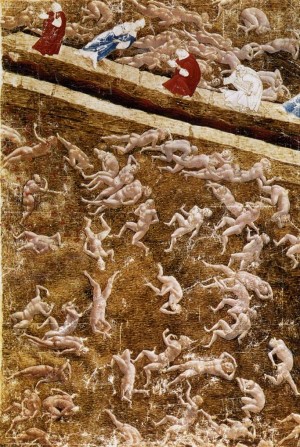 I don’t see any tombstones here. Satan surely wouldn’t have wasted time putting them all over the ground. (And besides, at union labor rates, they would have cost a fortune. But I digress.)

Obviously, they’re meant to be there for aesthetic’s sake–graves look cool, and they help to provide contrast between the surface of hell and the sky above–but is there any meaning to be taken from these?

Maybe hell is actually on earth. In fact, the lyrics to the title track, “Bat Out of Hell,” even speak to this notion of hell as less of a metaphysical afterlife and more of a inescapable state of being:

And I know that I’m damned if I never get out
And maybe I’m damned if I do
But with every other beat I got left in my heart
You know I’d rather be damned with you
Well, If I gotta be damned you know I wanna be damned
Dancing through the night with you

This poses an interesting question. If the hellscape we see depicted in this album cover is meant to be some sort of representation of reality–as opposed to the biblical underworld–then what’s that huge bat on a church supposed to represent?

The Bat on the Church 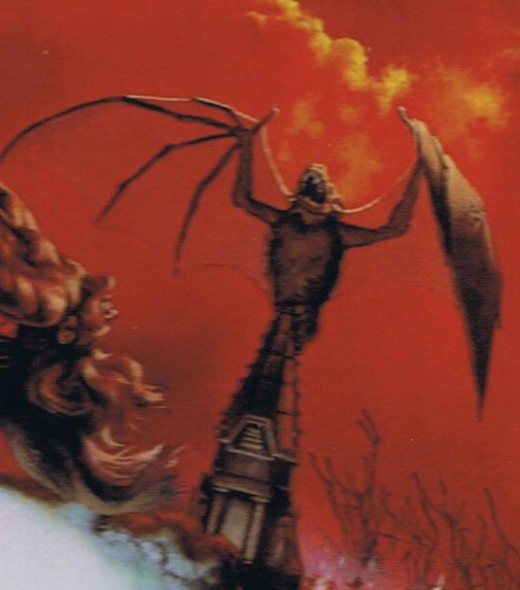 Also, why is the bat staying in hell when the name of the album is Bat Out Of Hell?

At this point, we need to acknowledge that Richard Corben had to have read the lyrics to at least the title track of the album before creating this artwork. This is most clearly evinced by the description of the motorcycle in the song, which is taken directly from the lyrics, “I’m gonna hit the highway like a battering ram on a silver black phantom bike.” (More on the bike later–we’ll get there, I promise!) This is important because of the context in which the phrase “Bat out of hell” appears. Specifically, the protagonist in the song is escaping “like a bat out of hell.” In other words, he’s moving so fast that even the bat, who is known for his velocity, is stunned at the scene and incapable of taking chase.

That explains why the bat isn’t leaving hell–to provide contrast to he who is leaving–but it doesn’t explain why the bat is on what appears to be a church steeple. For that, we return to our interpretation that this scene is some projection of hell-like elements onto a representation of earth. A church makes sense, given the presence of the graveyard. As for the bat, he represents the evil force that has overtaken everything on earth, including its holy places.

Again, we turn to the lyrics to support this interpretation:

The sirens are screaming and the fires are howling
Way down in the valley tonight
There’s a man in the shadows with a gun in his eye
And a blade shining oh so bright
There’s evil in the air and there’s thunder in the sky
And a killer’s on the bloodshot streets
Oh and down in the tunnel where the deadly are rising
Oh I swear I saw a young boy
Down in the gutter
He was starting to foam in the heat
Oh Baby, you’re the only thing in this whole world
That’s pure and good and right

These lyrics describe the extent to which evil has overtaken the world: there’s only one thing that’s pure and good and right in it–the protagonist’s love interest–and everything else is hellspawn. Hence the bat on a church in the middle of a graveyard.

So that leaves only one part of this image to unpack. Yep, I know you’ve been waiting for this: 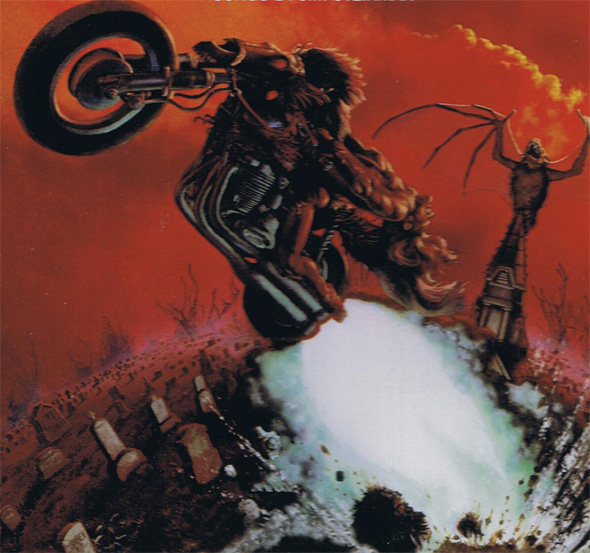 [Let’s pause the overthinking for a moment and appreciate how flipping sweet this image is.

As we saw before, Richard Corben took this image of the motorcyle and rider straight from the lyrics of the title track: “I’m gonna hit the highway like a battering ram on a silver black phantom bike.” Although there’s no highway to speak of in the picture (Roads? Where he’s going, he won’t need roads–the bike is a freaking rocket!), the bike literally is silver and black, and the horse’s skull gives it a ghostly or undead quality. The rocket-action speaks for itself (high velocity), which leaves only the ripped naked dude open for interpretation.

Now it’s time to bring our old friend irony back to the table. Compare the guy on the bike to the guy who sings this song: 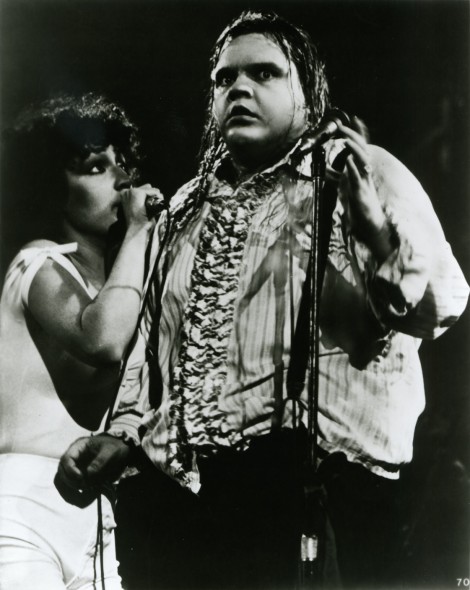 Now, I have no proof that the muscle-bound protagonist on the cover is meant to be a joke at the expense of the decidedly non-muscle-bound singer of the album. But I do know that the sum total of the imagery of the album cover suggests a fairly straight interpretation of the lyrics to the title track and the title itself. The art by itself is unironic, but it comes ironic with the comically gothic “Meat Loaf” emblazoned on the front (presumably done by someone other than Corben) and the lyrical content of most of the album.

I think it’s totally possible that Jim Steinman gave Richard Corben the title of the album, the lyrics to its title track, and instructions to make something “awesome,” knowing that he’d come back with cover art that would create an ironic contrast with most of the content of the album and its lead singer.

I have no evidence to back up this interpretation, save for what’s on the reverse side of the album sleeve: 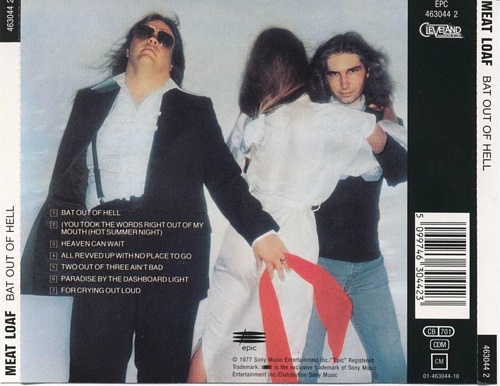 I don’t know what’s going on in this picture, but I’m pretty sure that Richard Corben was not involved in any way.

25 Comments on “Album Covers That Blow My Mind: Meat Loaf’s “Bat Out Of Hell””