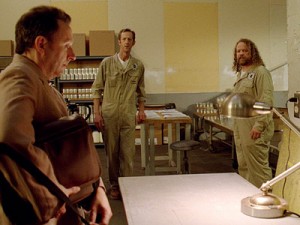 Earlier this week, Wrather, OTI’s fearless leader, asked me to write one final Overthinking Lost post to commemorate the release of the Lost DVD set.  You may have heard that this DVD set includes a never-before-aired twelve-minute “epilogue” to the series.  Have you seen it yet?  If not, go take a look.  I’ll wait while you find it on Goog…I mean, the official DVD that you purchased legally.

If you search through the Internet, you’ll find that two reactions to this epilogue exist.

Reaction Type 1: “Well, it was unnecessary, and it didn’t really tell me anything I couldn’t have guessed on my own, but it was nice that they made it.”

Reaction Type 2: “This is just another way for the creators of Lost to piss in our faces after wasting six years of my life!  You suck, Lost!”

While my own reaction leans strongly towards Reaction Type 1, I’m much more interested in the second type of reaction.  Unfortunately, there are no real statistics out there, but it seems like a huge contingent of Lost fanboys have now turned into virulent Lost-haters.  It seems to be even worse than the BSG backlash; where most of the BSG fans now say, “The last seasons sucked, but the first two seasons were classic,” three months after the finale, many of the biggest Lost fans are saying, “It wasn’t worth it.  Not any of it.”  Last year, Lost was named one of the top 10 sci-fi shows ever on io9.  This year, due to popular demand, it was taken off the list.  The backlash hasn’t just begun, my friends.  It’s accelerating.

Me?  I don’t care very much either way.  I’ll always look back on Lost with fond memories, even if I wasn’t a big fan of the last five minutes of the finale.  When I wrote my last Overthinking Lost post, I said I had hoped that the show would influence television in a positive way for years to come.  Now, I’m not so sure.  It seems to me that the Lost backlash is teaching network executives lessons–lessons that may affect television for the worse.

BAD LESSONS LEARNED FROM LOST AND ITS FANS

Potential Lesson 1: Viewers can’t handle ambiguity.  Not even a little.

Why this lesson seems right: Most of the fans who have turned on Lost have done so because they believe the whole show was some kind of con.  Lindelof and Cuse directly or indirectly assured viewers that all questions would be answered, yet “The End” failed to tie up all the loose threads.

Proof that TV execs are taking this lesson to heart: Only one Lost-clone—The Event—is slated for this fall season, and NBC seems aware that it’s taking a real risk with this one.  Will people really care to watch a show about an event that is so ambiguous even the characters in the show don’t know what it is?

Why this lesson might be wrong: Inception.  Lost and Inception aren’t the same, of course, but they do have similar tones.  Both are definitely sci-fi but hide that fact well enough that even non-sci-fi-fans allow themselves to enjoy them.  They both seem to be about major questions (“What is the Island?” “Who is the real mark of the Inception?”), and both delight audiences with fancy literary tricks (flashbacks, flashsideways, dreams within dreams).  But neither Lost nor Inception is primarily about those questions or those literary devices.  At heart, they are both about a single character learning to deal with the ghosts of his past.

And both are quite ambiguous at times.  Maybe Lost failed because it stayed ambiguous for too long.  But if fanboys hate ambiguity so much, why are they calling Inception—which is just as ambiguous as Lost—“the greatest movie of all time”? 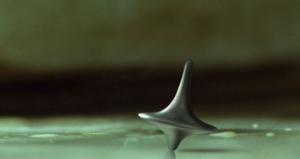 Potential Lesson 2: If you have to have mysteries, solve them as quickly as possible, or viewers will get impatient.

Why this lesson seems right: Again, see the fanboy comments.

Proof that TV execs are taking this lesson to heart: At the most recent NBC press tour, the producers of The Event basically begged viewers for their trust, saying “The show’s really designed to answer questions, to satisfy people… in the second episode we are very clearly answering the two largest open questions in the pilot.”

Why this lesson might be wrong: Three words: Twin Peaks, Flashforward.  Twin Peaks, you’ll recall, was incredibly popular in its first season but then hemorrhaged viewers once its main mystery was solved.  Flashforward tried to do what the makers of The Event are currently attempting—do a Lost but still answer all the viewers’ questions as quickly as possible—and it was promptly canceled. 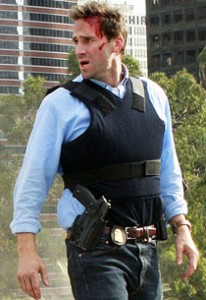 Joe is still confused by this turn of events.

Still, let’s give viewers and TV execs credit.  They’ve learned some good lessons from Lost, too.

GOOD LESSONS LEARNED FROM LOST AND ITS FANS

Potential Lesson 3: Network shows can be as ambitious and critically-acclaimed as cable shows.

Why this lesson seems right: Of course, Lost wasn’t the only network show that helped critics learn this lesson, but it was definitely one of the most popular.  Going up against two highly-acclaimed HBO shows (Deadwood and Six Feet Under), Lost- won an Emmy for Outstanding Drama in 2005.  It has since earned a high place on many TV critics’ lists of best television shows of the 2000s.

Proof that TV execs are taking this lesson to heart: Just look at the network pilots made over the past six years.  Sure, most of them weren’t any good, but you’ve got to admit that, on average, these series were more ambitious than the pilots we were seeing in the pre-Lost years.  (At the very least, the post-Lost shows were more expensive to make, so that’s… something.)

Why this lesson might be wrong: Cookie-cutter procedurals and reality shows still top the ratings for the major networks.  Most of the new pilots this season are still cop, lawyer, and doctor shows.

OTHER LESSONS EXECS SHOULD LEARN FROM LOST

Lesson 4a: …but only if you don’t tell them it’s science-fiction.  If it gets too science-fictiony too soon, you get Flashforward or Fringe, neither of which worked ratings-wise.

Lesson 4b: Today’s audiences will watch cross-genre shows…but only if the main concept of the show is very strong.  It seems to me that the main reason Lost was a success but Flashforward was a failure was that Lost’s high concept was stronger.  “A bunch of people crash land on a deserted island” is much easier to understand than “the whole world blacks out for a few minutes and sees their futures but maybe they aren’t actually their futures and what if the future can change and also some evil group may be behind the blackouts.”

Lesson 5: It doesn’t matter how good the concept is if the writing and acting aren’t strong.  Although I really liked the concept for Persons Unknown (I am a fan of The Prisoner, after all), I could not sit through more than one episode, because the dialogue was tin-eared, the character motivations unrealistic, and the acting wooden.  The acting may be the most important thing.  If you get actors like Terry O’Quinn and Michael Emerson on board, it might not matter how ridiculous the plots or dialogue are.  We’ll believe them. 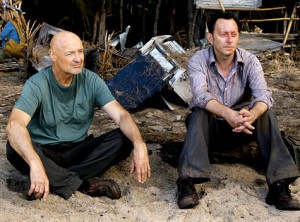 Who here wouldn't watch a show about Locke and Ben sitting around on the beach, talking about nothing?

Lesson 6: When audiences decide they don’t care about a love triangle, drop it.  Once Lost stopped harping on Kate’s love life and started focusing on her relationship to Aaron and Claire, her character became a million times better.

Lesson 7: It’s pretty cool to watch a show where literally anyone can die at almost any time.  It keeps audiences on their toes.

Lesson 8: Matthew Fox is underrated.  The fact that he was able to make Jack likable again in the last season was nothing short of a miracle.  Give this man more work!

Lesson 9: Give episodes room to breathe.  Every Lost-clone I’ve tried to watch so far has been non-stop action and question-asking.  If you want to make a show that replicates Lost’s success, watch the pilot again.  Notice how slow it is at points, especially at the beginning.  Notice that characters are given the room to develop.  People may remember Lost for the explosions and plot twists and smoke monster, but my favorite moments from the show will always be the quiet moments: Sun finding freedom on the beach; Locke standing for the first time on the Island; Sawyer telling Jack about how he met his dad; Locke teaching Walt how to play backgammon; Penny and Desmond on the phone during “The Constant”…

Lesson 10: Michael Giacchino should score everything.

[What lessons do you think TV producers should learn from Lost?  Sound off in the comments!]

Or read more from… Featured, TV, Lost, the golden age of television

24 Comments on “Overthinking Lost: The Epilogue”