Howard Zinn’s 1980 bestseller, A People’s History of the United States, wasn’t the first history book to suggest that the stories of average men and women were as important as the stories of the great men and (occasionally) women who dominate most history books.   It was, however, the first such book to sell millions of copies.

While a number of contemporary reviewers panned Zinn’s history, thinking it too biased in its focus on the oppressed and the underdogs in some of America’s great fights (Native Americans, slaves, women, workers, etc.), it has become one of the most influential books in recent years, often used as a supplementary textbook in classrooms around the country. 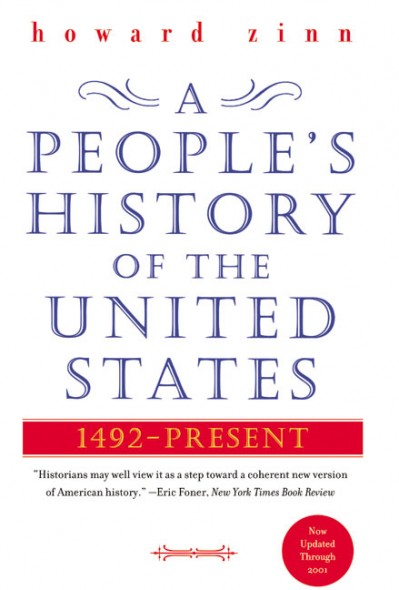 Print this image. Cut it out. Tape it to the front of the Twilight novel you're currently rereading. Now you're ready to go back to that trendy coffee shop where they used to laugh at you.

One of the reasons that the book is so successful and such a good read is that Zinn lets the subjects of his work speak for themselves.  Instead of the Gettysburg Address or the Adams/Jefferson letters, Zinn lets our previously unknown forebears tell their stories through speeches, diaries and letters in a way that’s so compelling that Ken Burns subsequently made a whole career out of it.

As you may imagine, with its focus on the little guy, Zinn’s book is considered pretty liberal.  Zinn’s own affiliations with civil rights and anti-war organizations (he was a WWII vet who was present at the one of the first uses of napalm against human beings), seem to bear this out.   It’s so liberal and so successful that  Larry Schweikart and Michael Allen felt the need to write The Patriot’s History of the United States, an unabashedly conservative large-print counterpoint that Glenn Beck has helped push onto the bestseller lists.

Given those liberal credentials, is it any wonder that Hollywood has embraced A People’s History?  AJ Soprano read it.  Eddie Vedder and Bruce Springsteen sang about it. Marge Simpson read it. Matt Damon and Ben Affleck featured it in Good Will Hunting.

And when we saw the trailers for the Will Farrell/Adam McKay film The Other Guys, it seemed that Zinn’s book had graduated from prop to inspiration.

The trailers for The Other Guys suggested that this was the story of the unsung, the cops who don’t get movies made about them.  Samuel L. Jackson and Duane Johnson play the usual larger-than-life heroes, the Tango and Cash, Gibson and Glover, Martin Lawrence and Will Smith supercop characters we’re used to.  Farrell and Wahlberg play the office losers, the workaday schlubs who don’t get the girls or the glory, but who get the job done – the people of whom Zinn writes. 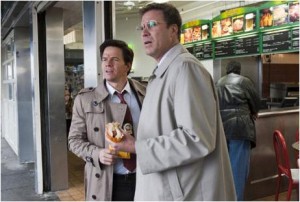 It's kind of like looking in a mirror, isn't it? At least on the right-hand side of the image where the big guy is buying a burger.

Throwing these Ordinary Joes into the kind of over-the-top situations that cinematic police face every summer looked like a fantastic comedic premise.  Given the success of the film’s opening weekend, millions of Americans thought so too.

But that’s not what the film is actually about.

There are a few scenes, most of them in the trailer, that hew to this premise, but the movie largely ends up being about the incredible sexual gravity of Will Farrell, the Hulk-like rage of Mark Wahlberg, the immortal lyrics of TLC, and a financial genius who makes the incredibly poor decision to run a Ponzi scheme on Nigerian drug lords.  Like a lot of Farrell/McKay productions, this movie hinges upon Will Farrell being weird in a very amusing way.  As a character study of a lunatic, it works extremely well.  As a show about the unsung, it fails completely.

And that’s because we, the unsung working schlubs of the world don’t really want to laugh at ourselves.

I’m a huge fan of a People’s History, but even I will admit that it’s anything but funny.  The first few pages about the systematic destruction of the native people of Hispaniola by Columbus and the Spanish force the reader to imagine a nightmare barely conceivable to those who grew up in modern America.  But even amidst America’s general affluence, most Americans identify with Zinn’s subjects because we see ourselves as underdogs put down by a system that rewards the rich and famous.

We much prefer to laugh at our social superiors getting a kick up the backside (as Downey Jr.’s Chaplin put it in that great scene with the dinner rolls) or at characters so exaggerated that it’s impossible for us to see them as surrogates for ourselves.  In the former instance, all of the Real Housewives/Kardashian/Jersey Shore shows let us feel superior to those with larger incomes while the new Comedy Central sitcom Big Lake lets us watch a failed investment banker routinely embarrass himself.  In the latter case: John Belushi, Jim Carrey, Ben Stiller, Adam Sandler, Steve Martin, Larry the Cable Guy, et al.

So sure, we’ll laugh if you give Will Farrell a back story as a pimp, but a film about two normal, not-former-pimp cops forced into extreme situations would be tragic, tense and overwhelming.   Actually, it would be The Wire. 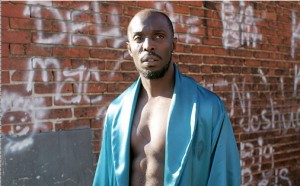 Rule of thumb: take any excuse you can to post photos of Omar Little.

I know there are certain Wire taboos on this site, but the Dickensian perspective of that show is the best example I can think of in which the stories of the average person are told as the A-story.  The other great example of recent vintage is Breaking Bad.   And while the writers of both shows include the occasional laugh-line to relieve the tension, both shows are mired in tragedy.  That they’re considered two of the best shows ever made goes to show that Zinn was right—the story of the rest of us is certainly worth telling, but won’t get you many laughs.

The writers of The Other Guys must have figured that out somewhere during the process, which is why their movie quickly abandons its supposed premise and becomes another very funny opportunity to watch Will Farrell do the Will Farrell thing.  While it was certainly fun, I do wish we’d gotten to see the movie that the trailers sold us.  I doubt we ever will.

Addendum: As I put this story to bed, an example came to mind that, for a moment, completely destroyed my argument: Date Night, in which an ordinary couple (Tina Fey and Steve Carell) flees from gangsters after a case of mistaken identity.   It’s damn funny and features ordinary people in a horrible situation.  I’ve come to the conclusion that Date Night works because the film is basically a marriage comedy with a different backdrop.  Marriage joke standards, like the gag about Carell being threatened by a shirtless Mark Wahlberg, or lines like “I don’t want our kids to live with your mother.  She’s awful!” would have worked as well at a grocery store as they do in the gritty underworld the film depicts.  Thoughts?

Are there great comedies out there that feature realistic and average people?  Sound off.

Or read more from… Books, Featured, America, date night, History, howard zinn, mark wahlberg, omar is the greatest character of all time, steve carell, the other guys, the wire, tina fey, Will Ferrell

15 Comments on “A People’s History of the NYPD: Howard Zinn, The Other Guys and the Cinema of the Unsung”