Please note: this article contains three references to genital injury, two of them illustrated.  You have been warned.

Plato said that comedy comes from enjoying the suffering of others.  Aristotle argued that comedy comes from the ridiculous or from deformities that cause laughter but do not injure us.  Shakespeare thought that comedy came from identity theft, thinly veiled sex jokes, social inversion, and marriages.   Thomas Hobbes noticed that “we laugh when we feel superior to others.”  Freud believed that we laugh with relief when we find our fears to be unfounded.  Mikhail Bakhtin called comedy the “peculiar logic of the ‘inside out.’”  Mike Meyers was certain that comedy occurred any time he did a Scottish accent.

On August 9, 2010, researchers from the University of Colorado – Boulder released the results of a new study, claiming to have figured out exactly what makes things funny.  Setting aside all those previous attempts to isolate the “funny” gene, they propose the following:  “humor comes from a violation or threat to the way the world ought to be that is, at the same time, benign.” 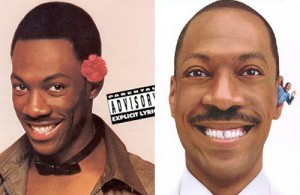 Not Benign vs Benign.

You can read the press release here, and should.  It’s short, and it’ll make sense of the rest of this article.

A test of this hypothesis presented two scenarios to test subjects: one in which the Jimmy Dean sausage company hires a farmer as a spokesperson, the other in which ol’ Jimmy hires a rabbi.  While neither case sounds particularly amusing, the subjects thought that the rabbi scenario was funnier (everyone knows you can’t go wrong with a kosher joke in Colorado).  This supports the first part of their hypothesis: the violation of the natural order – a rabbi hawking pork sausage – is, in fact, humorous. 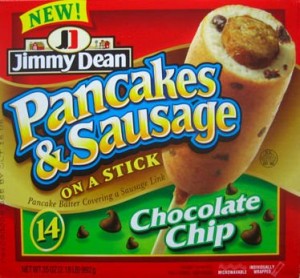 This actual product requires neither rabbi nor farmer to elicit laughter.

This is not new territory.  From Plato to Bakhtin, the inversion of norms has been a baseline standard for the definition of comedy for a long, long time.  We see this a lot in pop culture as the basis for most comedic films.   Will Farrell and John C. Reilly were too old to be Step-Brothers. Katherine Heigl would never sleep with Seth Rogen. Blue Oyster Cult didn’t need more cowbell. Knights don’t say “Nee!”

The problem with the McGraw hypothesis comes in its second half: that turning the world upside-down is funny only when it’s a benign threat to the way the world should be.  In his press release, Dr. McGraw suggests that previous theories of social inversion, superiority, or the release of tension would all hold true if you were to kill your spouse, but that killing your spouse isn’t funny because someone is actually getting hurt.  Using another odd set of scenarios in which a church and a credit union each raffle off an SUV to raise money, he claims to prove that we only like our comedic disorder if there’s no real threat.

First of all, I imagine that most people who kill a spouse generally feel a lot more tense and rarely notice a sense of social inversion.  But even granting his point, there are entire genres of fictional comedy dedicated solely to watching people get hurt.  As Mel Brooks said, “Tragedy is when I stub my toe.  Comedy is when you fall in a manhole and die.” The example that comes to mind is the oeuvre of Ben Stiller, who’s most iconic on-screen moment (other than Magnum) is when he critically injures his penis with a zipper.   Anyone who’s played Grand Theft Auto has beaten up some random driver and giggled throughout.  Think also of every pratfall, ever. 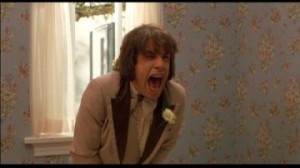 The hair gel thing was pretty funny too.

To be fair to Dr. McGraw, he’s covered this, dismissing all slapstick as benign because it’s fictional and we know that’s it’s not actually happening.

“’We laugh when Moe hits Larry because we know that Larry’s not really being hurt,’ says researcher A. Peter McGraw, referring to humorous slapstick. ‘It’s a violation of social norms. You don’t hit people, especially a friend. But it’s okay because it’s not real.’” 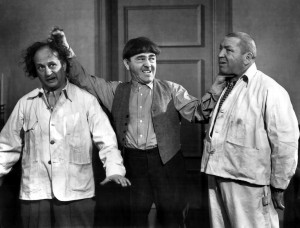 The ASPCL confirms that no Larrys were harmed in the making of this film.

OK, Doc.  What about non-fiction slapstick?

America’s Funniest Home Videos has been on the air for 20 years, featuring real people really injuring themselves in a  variety of ways (often having to do with an above-ground pool).  When it began in 1990, AFV was pulling in more than 38 million viewers every Sunday night at 8:00.  After church, barbeques, and a swim in the above-ground pool, 15.4% of America tuned in to watch other Americans hurt themselves and/or others.   Even today, 7 million people watch the show.  The other 31 million now watch reality shows instead, which are basically the same thing but with psychological damage instead of people falling off of stuff.

We even think it’s funny to watch little kids get hurt. Don’t believe me?  Please enjoy this six minute video, a montage of PLAYGROUND ACCIDENTS that played on national broadcast TV.

The other great modern comedic example of taking pleasure in the authentic pain of others is Jackass.  I didn’t watch much of this show, my pretentious college self thinking the show too lowbrow.  Then I was dragged to Jackass 2.  Someone got things stapled to his ass.  It was hysterical.

The guys on this show light themselves on fire, get hit by cars, and perform dozens of similarly painful stunts. In 2008, Johnny Knoxville was filming a motorcycle stunt for Jackass, lost control and, as he put it, “The bike goes about 15 feet in the air, comes down and breaks off the handlebar on my crotch.” 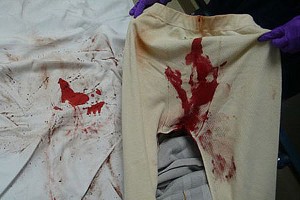 This is an actual photo of Knoxville’s pants after the accident. Laugh, America, laugh.

Jackass was insanely popular from 2000 to 2002, and the two Jackass films both opened at #1.  Millions of Americans paid $8 to spend two hours watching video of real injuries.  And we’re about to do it again for $10-$12.

Jackass was so damn funny that tremendously stupid people seriously injured themselves while attempting to recreate a number of the stunts.  Failing to appreciate the Darwin Awardesque utility of those incidents, Senator Joe Lieberman added to his long list of embarrassing panders by condemning the show.

OverthinkingIt.com is a pop-culture blog, so I’ve focused on the fact that, in our media, America clearly thinks that pain and suffering, real or fictional, is funny.  But let’s take a minute and do a little psych evaluation of our own.  Think about the last time one of your friends took a serious fall, slammed his/her head into something, or took a flying object to the groin.

14 Comments on “Scientology Wins! Pop Culture Defeats Psychology on the Subject of Humor”