When Facebook first told me to “like” Taylor Swift because I “like” Lady Gaga, I was amused. Not because I don’t also like Swift, but because I saw them on opposite ends of the pop spectrum. On one end is virginal, sweet Taylor Swift – pleasing aesthetically and vocally without garnering any intense interest on my part. On the other is Lady Gaga – sexual, ambitious, trying as hard as she can to get my attention and succeeding. But then I realized they are in many ways similar: the best current examples off a very familiar trope of popular music represented by Madonna, Britney Spears, and more recently Ke$ha. Lady Gaga and Taylor Swift are divided on how they approach and negotiate fame, but they play on the same field: young, white, blond female pop stars.

The way in which Swift and Gaga style and draw attention to their hair is reflective of both their similarities and their differences in their approaches to music and fame. Swift’s lovely curls define her normalcy; it shows that she’s a girl just like other girls, a celebrity in the mold of many other celebrities. She is a girl who dates boys and loves boys: her connections to Taylor Lautner and Joe Jonas were well-reported on, and her penchant for writing about boys is often mocked (even by her). 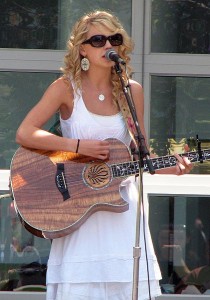 Gaga, in contrast, wants to stand out. She wants you to see her and her platinum/yellow/purple/pink hair as weird; she’s made a point of flying her freak flag with wigs and dyes and blowouts. But despite her pointed love of fame, Gaga works to shield herself from the gossip community. Her bizarre and not always flattering hair reflects her desire to take herself out of the normal celebrity gossip continuum; she deflects attention from her core self, her face and body, by dressing as weirdly as possible.

Gaga’s hair is sometimes less blond, more pink or grey, and it is sometimes nauseatingly blond, more yellow. But since she dyed her brunette hair platinum and became Lady Gaga, it has always been some degree of blond. Her blonde hair is a thoughtful affect: a way for her to play with and channel whatever her current theme or image is. She changes her hair constantly, going through several different wigs and hairstyles in any performance or appearance. Her hair is sometimes the focus of her outfit: sometimes it’s an abstract iconographic reference, like the hair bow, and sometimes it’s a direct communication of her current object of promotion, like her “hair telephone” during promotion of the song Telephone. And sometimes it is part of a larger look, coordinating with other themes without being the center of attention. 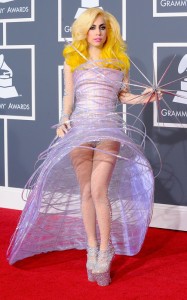 At the red carpet for the 2010 Grammies, her hair, like her dress, is recognizably formal and traditionally beautiful in its shape and volume, but the neon yellow dye, like her heelless shoes and high front hemline, is a recognizable chafe at the red-carpet construct. Hair is often read as essential to a woman’s presentation and sexuality, and Lady Gaga heavily draws on that expectation in her fulfillment and subversion of the pop star ideal.

Taylor Swift is not nearly as explicit about using her hair as a communication and promotion tool, but it’s still key to her public appearance. Her hair is perfect after a fashion: long, curly without being frizzy or messy, golden blond. In performance, she swings her hair around as she dances (very poorly). Her long corkscrew curls are about the only thing that’s unbridled about Swift, in contrast to her virginal image and white dresses. Her hair is punctuation in performance, her golden prom-queen crown, her one expression of otherwise-erased sexuality.

It’s also her trademark: Swift’s hair rarely if ever changes style or color. She almost always has sun-kissed hair, worn with few adornments, reaching halfway down her back. For special occasions, she will wear it up, usually with a flower. On a really special occasion, she’ll straighten it. That’s her entire hair repertoire; her hairstyles are about as varied as her dresses, which are generally short and shiny or long and shiny, usually (though not always) red or white. This is fine, but like her songs, it’s not very exciting or expressive. She’s a pretty blond girl in a shiny dress. Nothing wrong with that, but it’s routine and expected. Her blond hair is the most recognizable, static feature of her appearance.

At first, Gaga’s hair was also a simplistic, traditional trademark. Platinum blond, very straight, blunt bangs. Like the rest of her “Just Dance” image, she was purposefully frivolous and playful and not much weirder than your average hipster; her hair was as ostentatious as the rest of her image, but without the purposeful weirdness of her current look. Like Swift at first, it stayed fairly consistent in that particular color and style up throughout 2008 into early 2009. This style represented her as an emerging voice: trying to make a lasting impression, trying to fit into the mold of fame she so desperately wanted. Both Swift’s and Gaga’s hair at the emergent points of their careers were default popstar: long and blond and pretty, but not much more than that.

But unlike Swift, Gaga began switching up her look and attendant hairstyle frenetically upon claiming the fame. During promotion of “The Fame” singles, her hair, while it made an impact and contributed to her overall look, was nothing very out of the normal pop star theatrics. Her first major “statement” was her hair bow while promoting “Just Dance”. Both the bow (and the crystals shape in her dress and hair, her other main adornment of this period) is playful, unserious: a graphic, iconographic twist on her default hairstyle. And certainly unlike Swift, her hair was supposed to be humorous rather than pretty. After these relatively tame variations, she began to go that places Swift never would with her hair and appearance: in late 2009, Gaga’s hair was often voluminous but messy, and then freakish. 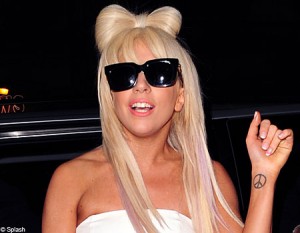 One of her less ridiculous styles.

The differences and similarities between Swift and Gaga’s approach to hair as a reflection and vehicle for their artistic and professional ambitions are most succinctly contrasted on the covers of their sophomore albums. On the cover for both Swift’s sophomore album Fearless and Gaga’s second album The Fame Monster, their blond hair surrounds their half-obscured face, making a stylistic statement about the album.

Swift’s hair takes up a huge portion of the cover. On the cover, Swift is admirable and brave and fun, someone whose hair is desirable and whose tepid romantic woes are identifiable. She’s not challenging or trying to hard; like an archetypal prom queen, her beauty and charm and not particularly remarkable talents guarantee her attention and success just for being her.

Gaga, though, would be trying way too hard if she didn’t have the talent and success to back it up. Her blunt triangle looks fried, processed, but very memorable. Like many of Gaga’s cuts, it’s overstating the product she puts out. 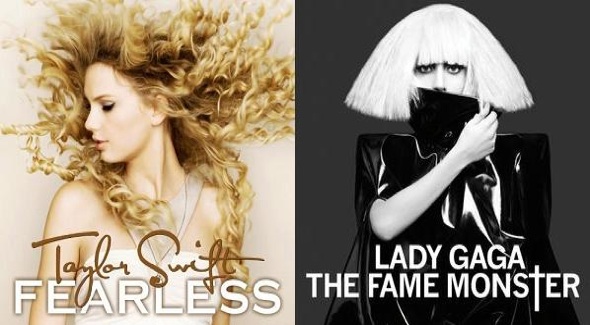 On the covers and attendant promotional materials for these second efforts as pop stars, both Swift and Gaga communicate a relateable, role-model image to their audience through their hair. Swift is a grown-up version of the cliched popular-and-gorgeous-but-still-nice girl: she is successful, beautiful, and like her hair, expansive and “fearless”. Gaga, though, reaches out to her fans, and says that she and they are the same: “monsters”. She is a freak telling people it’s okay to be freakish. Her hair is evocative of the Bride of Frankenstein, and she abandons the blond in an alternate cover in an emo portrait of pain, complete with eyeliners tears.

Both are using their hair to underscore their relevance to their expressed target audience. Swift’s lovely locks are idealized by everyday good girls who want to be pretty and sing songs and have boyfriends. Gaga’s hair makes a statement to be admired and imitated by hipsters, freaks, and others who consider themselves mildly alternative and weird.

While both Swift and Gaga have used their tresses to garner attention and further their careers, their roots are starting to show. Both of their shtick is getting a little tired: their latest singles, “Today Was a Fairy Tale” and “Alejandro” have failed to equal their previous radio success. Gaga’s constant changes are now expected and tired: her neon-colored hair is shrill and overbearing. After a year of unbridled success, it finally seems like she is trying too hard after all. And Swift’s one note is going flat; “pretty girl who is in love a lot” is not really a stunningly original gimmick for a pop star anyway. Her song subjects change as infrequently as her hair – she’s curly as ever and reportedly working on another album about “boys and love, what do you think.”

The shelf life of a blonde pop star can vary wildly. Taylor Swift and Lady Gaga are already seeing new competition crop up from the likes of dirty blond Ke$ha. Lady Gaga has proven adept at changing her hair style and color to keep up her fan’s attention-deficient interest, but her flashy hair might change too often to make a lasting impact. Taylor Swift’s safe, consistent beauty and unchallenging songs have won her fans, but will her fans be as loyal to her as she is to her curls?

Rachel McCarthy James, also known as RMJ, is a feminist writer. Her work has published by Feministe, Bitch Magazine, and Sociological Images among other places. You can find her blogging regularly about media, news, and language at Deeply Problematic.