It’s Friday the 13th, Overthinkers! Thrill at the terror of the spookiest season of all … mid-August!

In music news, those scrappy indie kids calling themselves The Arcade Fire have the #1 album in America. The smashing success of “The Suburbs,” their third studio album, comes as a result of a webcast concert in Madison Square Garden, promotional downloads and word of mouth among hipsters. This is what social media hath wrought, Overthinkers – and it’s pretty damned good. 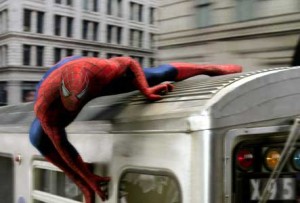 In the CIRCLE! The CIRCLE of LIIIIIIIFE!

Some fodder for the TFT podcast: Britney Spears will guest star on an upcoming episode of Glee. She’ll appear to the cast in a dream sequence while they’re getting their teeth cleaned at the dentist’s office, apparently. Slated for next season: the cast of Glee getting separated during anti-mosque protests in New York City, only to be guided to safety by a candy-striped Elvis Costello.

Can’t get enough pop culture? Netflix announced deals for online streaming this week with Paramount, Lions Gate and MGM. This would expand Netflix’s Watch Instantly library from a bunch of forgettable 90s sex comedies plus Lone Wolf McQuade to a huge range of classic and contemporary films. What are you turning your DVD player into? Mine’s a BattleBot.

Flip The Other Robot Over was the dominant strategy.

And finally, two hugely anticipated movies open today: Scott Pilgrim vs The World and The Expendables. Yours truly plans to see them both today; stay tuned for the scoop. If you don’t like movies with fun or action, you could also watch Eat, Pray, Love. Will the rich white woman find meaning in her life through quirky travel and a new set of material possessions? SPOILER ALERT: yes, but at a price. 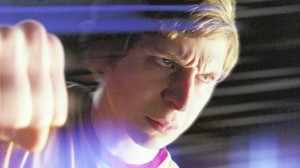 Will The Arcade Fire score Julie Taymor’s Broadway adaptation of The Expendables in ten years? Or do you want to chat about something we missed? Sound off in the comments, for this is your … Open Thread.