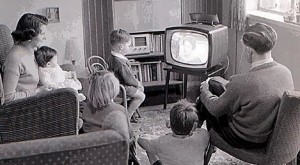 At first, they told us what to watch and when.

There were a small number of television networks, and they programmed certain shows at certain times of day. The earliest ones were live, which meant that even if we wanted reruns we couldn’t have them. Television, whose shows are a fancy pretext to keep you in your seat between advertisements, developed a revenue model predicated on scarcity: The show was only going to be on once, so you had to watch it then. The large number of viewers made the airtime very desirable. Advertisers bought advertising and we bought their products.

But like every technology, over time television has become a good deal less scarce. The Betamax Case made it legal to make your own copies of television shows and watch them when you want; the DVR made it trivial to skip commercials; DVDs, iTunes downloads, and streaming (to say nothing of illegal distribution) make us little networks unto ourselves, able to schedule our prime time whenever we want it.

Recently, my girlfriend decided she wanted to watch Mad Men from the beginning. I was excited about the fourth season starting, and she, having never seen an episode, wanted to hop on the bandwagon. So one Saturday morning, I gave her my copies (I have them archived on Betamax. Or something.), handed her the remote, and went upstairs to do some vitally important work on the Internet.

Time passed, as it does on 4chan—sorry, I mean “when you’re doing vitally important work on the internet”—and before I knew it it was the late afternoon, and she had finished most of the first season. I was astonished: Mad Men is a dense and sometimes arduous show. It rewards close, sustained attention, which is difficult to keep up for long periods of time. Or so I thought.

As she watched the rest of seasons 1 through 3, I sat in on many episodes, and was astonished at how easy the show was to watch in large doses. (Part of this may have had to do with the fact that I’d seen it before, freeing me up to notice the exquisite details of the environment and of the narrative construction.) I didn’t even mind the slow start to season 3.

Within ten days, we’d finished three seasons, and started the fourth, which had begun recording on DVR. Over forty episodes. Please don’t do the “average hours per day” math. It’s just depressing. But it struck me that this pattern of technologically enabled binge-viewing is becoming more and more typical. It has certainly happened to me more than once, both with new shows and old (by the way, there’s an obscene amount of 30 Rock available to stream on Netflix).

Since it’s a decades-old form of entertainment, we’ve already got a substantial critical vocabulary for describing types of television. We talk about format (30 or 60 or 120 minutes; special or MOW or mini-series or series), we talk about genre (and an increasing number of sub- and micro-genres made possible by digital distribution and the concomitant proliferation of channels), we talk about tone (funny or solemn—the main difference between The X-Files and Warehouse 13).

To these I would like to add another descriptive category, one that encodes a show’s capacity to be watched for hours at a stretch. In deference to the terminology of the food industry, who have invested untold billions in the ongoing effort to keep our hands moving automatically and interminably between the bag of Doritos and our mouths, I’d like to call this new category “snackability.”

Snackability is only a function of format to the extent that a snackable television show will have more than one episode. Specials, movies of the week, sports—these are excluded from the snackable category because they are incapable of producing the automatic reflex to watch the next episode. But beyond that, any format can be snackable: half-hour, hour, two-hour, whether there are six episodes or six hundred.

Likewise, snackability is not a function of genre or tone. Law & Order can be just as snackable as 30 Rock—the entire TNT network stands as a testimony to this fact.

Neither is it a matter of quality or personal taste… how many times have you automatically watched the next episode of a show you knew to be terrible?

So snackability—and this is where I think I may spark some disagreement—is not merely a matter of personal preference. When I described above as “a show’s capacity to be watched for hours,” the passive voice wasn’t an accident. I believe that snackability is something that inheres in the show itself, and is not entirely viewer dependent.

So what makes a show snackable? Part of it may have to do with the rising tide of serialization. Even TV shows without the density of The Wire or Mad Men—shows where the proper unit of narrative measurement seems to be the season rather than the episode—have begun to partake in some aspects of serialization. People get married and stay married; people die and stay dead. Though the Simpsons habitually jokes about the way, no matter how egregious the misadventures of the episode, things will revert to their default state at the beginning of the next show, these jokes increasingly fall flat, since they are made at the expense of a straw man: The kind of episodic 3-camera comedy that was once ubiquitous and is now an endangered species.

The idea that you are in the middle of things—that you are being pulled along by the current of a larger story that continues from episode to episode—may be one thing that keeps you pressing that play button.

I’d add to this that the show must have a strong point of view, which usually means a clearly defined fantasy world and a strong central character. It must be compelling—literally. When in thrall to a snackable show, we are compelled—robbed of choice—and it takes more effort to break the cycle of the play button than it does to give into it.

The experience of watching a snackable show is transporting; you feel like you’re lifted out of your life and dropped into another. The care put into the creation of the fictional world—consistency of tone, quality of detail—helps this narrative transporation. (As a corollary, highly snackable shows are anesthetizing and might have some kind of addictive properties.)

A strong central character, giving us a dominant, authoritative, stable point of view with which we can identify, cements the hold of a snackable show. This one of two reasons why The Wire can’t be, strictly speaking, snackable: David Simon identified and worked against a tendency in contemporary prestige television—dating in its current incarnation to The Sopranos—to structure the show around a Shakespearean protagonist. The Wire is by contrast, novelistic and multi-vocal. The principled refusal to let us know where we stand may be politically laudable, but dramatically it is alienating (in the Brechtian sense), and we are always aware of the show’s status as artifact, as a made thing.

The second reason The Wire can’t be snackable is that its world, though finely wrought and fully realized, is sociological, not fantastical. It is meant to be a subset of the viewer’s world, not a self-contained narrative space, and we are constantly reminded of this. This precludes the kind of captivating narrative transportation that I’ve identified as a key feature of snackability.

For what it’s worth, the prevailing tendency at this moment, what I’ve called our second golden age of television, seems to be toward strong central characters and fantastical worlds. (Even when shows are meant to take place in the “real world,” that term is not meant sociologically; rather, I think, it is used to dissociate the shows from the genres of science fiction and fantasy, to which closer analysis would reveal they belong. I’m looking at you, Burn Notice, and at you, Mad Men.)

Practically, television has had to change its business model. The new models—subscription (as with residential cable TV or with Netflix) or a la carte (iTunes, Amazon, DVD)—seem to be predicated on abundance. Either we pay for access to an impossibly large stream of content or else we pay (more) for just the pieces we want. (The advertisements on cable TV, which mean I’m paying for the privilege of being advertised to, are an enduring frustration.) These models seem to be the new norm; the early days of Hulu were a sustained experiment in reviving the free, ad-supported model and have given way to a subscription model in Hulu Plus.

This is part of a larger move from scarcity to abundance, and this is why snackability is important to the economic future of television. We’ve become less like a docile herd and more like a Matrix-like hive of individuals on life support. They can’t tell us what to watch and when, but they can make it so that we never shut it off.

18 Comments on “Towards a Theory of Television Snackability”