[Enjoy this guest post from Mark Laughter on a subject near to Overthinking It’s heart: Eurovision! —Ed.]

On May 29, Lena Meyer-Landrut won the 2010 Eurovision Song Contest for Germany with the song “Satellite,” written by Julie Frost and John Gordon. The final round for this year’s contest was held in Oslo, Norway. The Eurovision Song Contest has taken place each year since 1956 and draws a huge European audience (approximately 120 million worldwide for the 2010 finals). Although critics contend that the results of the competition are often due more to politics than song quality, notable past winners whose victories led to long term success include ABBA (in 1974) and Celine Dion (in 1988).

Meyer-Landrut, who now goes by the stage name Lena, was unknown before the German television contest Unser Star für Oslo, held to select the national representative to Eurovision. The song reached number one on the European pop chart and her new album, including the winning song, spent several weeks at number one on the German and Austrian charts, with 3 of her songs appearing in the top 5 of the German singles chart. During a recent business trip to Europe, I heard “Satellite” literally dozens of times, on every radio station, from store speakers, bars and cafes, etc. It’s a pretty conventional pop song, but with a catchy-enough tune to become an earworm upon multiple hearings, and eventually may get airplay in the United States.

The central premise of the song is that Lena is in the grips of “Love”, about which she orbits “like a satellite”. This presumes that her listeners are familiar with the manner in which satellites orbit larger celestial bodies. However, the lyrics Lena uses to describe her situation reveal inconsistencies when interpreted with classical orbital mechanics, demonstrating that her situation is, in fact, not at all “like a satellite”.

Since American readers may not yet be familiar with the song, here are the full lyrics:

I went everywhere for you
I even did my hair for you
I bought new underwear, they’re blue
And I wore ‘em just the other day

Love, you know I’ll fight for you
I left on the porch light for you
Whether you are sweet or cruel
I’m gonna love you either way

Love, I got it bad for you
I saved the best I have for you
You sometimes make me sad and blue
Wouldn’t have it any other way

Love, my aim is straight and true
Cupid’s arrow is just for you
I even painted my toe nails for you
I did it just the other day

Where you go, I’ll follow
You set the pace, we’ll take it fast and slow
I’ll follow in your way,
You got me, you got me
A force more powerful than gravity
It’s physics, there’s no escape

The theoretical basis of attraction

Lena reiterates that she is in orbit like a satellite. Satellite orbits are governed by gravity, one of the four fundamental interactions along with the electromagnetic, strong nuclear, and weak nuclear forces. The Newtonian formulation of the force of gravity acting on one mass M2 by another mass M1 separated by a distance r is [vector equation F_G12 = -G*M1*M2*rhat/mag(r)2], where G is the gravitational constant. Gravity is the only interactive force that is relevant at astronomical scales, because of the short range of the nuclear forces and proton-electron balancing that minimizes electromagnetic interaction of large bodies.

However, Lena specifically states that she is under the influence of “a force more powerful than gravity”. She must therefore be postulating a fifth fundamental interaction. Assuming that this force acts in the same manner as gravity (attractive, proportional to mass, and inversely proportional to distance squared), she is really proposing a new force constant. Let’s define this constant as the love constant, L > G.

The setup of this song requires at least two independent bodies: Lena and Love, with the love force holding them together. The sun or some other star may or may not be part of the system: Lena repeatedly refers to days and nights, so either she is orbiting about Love which is itself orbiting about the star, or Love itself is a star. In the latter case, Love would have no concept of days and nights and so it would be meaningless for Lena to invoke these measures of time. So for our analysis we will presume the presence of a star.

In addition, we will assume that the system is interacting at non-relativistic velocities and masses, that Love is sufficiently massive compared to Lena that the center of mass of the Love-Lena system is essentially at the center of Love, and that Lena’s orbit around Love is (at least initially) circular. The system is given in Figure 1. An alternative formulation would have Lena orbiting around a body called You, with Love serving strictly as the force between them. However, from the way she starts most lines of the song with “Love,…” it’s clear she is singing _to_ Love and not just _about_ her love for You. In either case, the title of the body she is orbiting has no impact on this analysis.

As stated above, Lena repeatedly refers to days and nights. For her and Love to have the same concept of a day (in terms of a period of time of exposure to light from the sun and then of darkness), Lena would need to be in a synchronous orbit, with an orbital period matching Love’s sidereal rotation period. However, she also states that she is “in orbit all the way around you”, clearly requiring a non-synchronous orbit.

Lena also states several times that she “can’t go a minute without your love”. If this is simply an axiomatic acknowledgment that the love force is constant, then there is no inconsistency here, but as such this would be a wasted line, not worthy of repetition every chorus. Instead she likely is hypothesizing that there would be negative consequences if the love force were to stop acting for a period of time.

While the amount of orbital perturbation would depend on the scale of the bodies involved, a loss of love force for a minute would only serve to shift the orbit slightly into the elliptical for orbital periods on the order of a day or anything like 1 minute (see Figure 2). Any interruption of love force would not have disastrous consequences as long as Lena’s orbit remains within Love’s Hill sphere and the orbit does not become so elliptical that the trajectory is interrupted by Love’s surface or any atmosphere that may be surrounding it. An elliptical orbit short of these extremes may actually be favorable for Lena, as the increased distance from Love at times would be balanced with periods of relative closeness/intimacy.

Likewise, Lena states that she would “fall out into the night” if the love force disappeared. Even in the most extreme case of a complete and permanent elimination of the love force, this claim makes no sense (not even taking into account the remaining gravitational force between Lena and Love). Because of the relative size of Love compared to the sun, at any significant distance it will be impossible for Love to block a substantial proportion of sunlight from reaching Lena (see Figure 3).

In fact, if Lena truly fears falling out into the night, she should realize that it is only the presence of Love that puts her occasionally into darkness. Without Love, she would be orbiting the sun in perpetual daylight. In addition, assuming that Lena and Love continue to orbit the sun in the manner they were before, their individual orbits will occasionally intersect even in the absence of any attractive force between them.

Finally, Lena claims that “there’s no escape”. This clearly contradicts her previous points, if she is referring to the threat of separation from Love without any actions on her own part. She may, however, be claiming that she has no capability within herself to escape Love’s area of influence, which is a statement we can examine mathematically. Assuming that Lena is initially in a synchronous, circular orbit around Love:

Just to get a sense of scale of the solution to these equations, we assume that Love has the mass (5.97E24 kg) and rotation period (8.62E4 s) of Earth, that the love constant is equivalent to the gravitational constant (6.674E-11 N*m2/kg2), that Lena is average in weight (around 60 kg), and that she is equipped with a highly reliable Aerojet Orbital Maneuvering Engine like the ones on the Space Shuttle orbiters (engine mass: 118 kg; thrust: 26.7 kN; specific impulse: 316 s). In this scenario, using the equations above, Lena would only need about 100 kg total of monomethyl hydrazine fuel and nitrogen tetroxide oxidizer and would need to burn the engine for less than 12 seconds to escape Love’s influence (see Figure 4). She’d experience about 10 g during the burn, but this is well within the human body’s tolerance for horizontal acceleration (assuming she’s got the engine strapped to her back). Properly equipped, there’s no reason for Lena to claim that “there’s no escape” from Love, even if the love constant is several orders of magnitude greater than the gravitational constant.

Earlier we made the assumption that the Lena-Love system was interacting according to classical orbital mechanics. However, it is possible that the real point of Lena’s song is that Love is a black hole, a relativistic gravitational potential from which nothing can escape. Lena would not be a satellite in the traditional sense of the word, but she could represent a companion star orbiting the black hole. Love would be continuously accreting material from Lena, increasing its own mass while slowly sucking away her substance (“I saved the best I had for you”).

While confirming Lena’s position that “there’s no escape”, this interpretation also explains her apparent frustration that Love hasn’t commented on her new underwear or painted toenails. Nothing can escape Love’s pull, not even light, so complimenting Lena on her efforts would be impossible even if Love did notice them.

Finally, casual readers may try to apply this same analysis to “Satellite” by Dave Matthews Band. However, DMB’s song clearly portrays the functional characteristics of an Earth-orbiting satellite (spying, communication, weather monitoring, satellite TV, etc.) and makes no attempt to describe its orbital characteristics, so a direct comparison with Lena’s version would not be advisable.

Mark is not a rocket scientist, but knows a few. He actually dislikes Europop and wrote this article as part of his therapy to get “Satellite” out of his head. 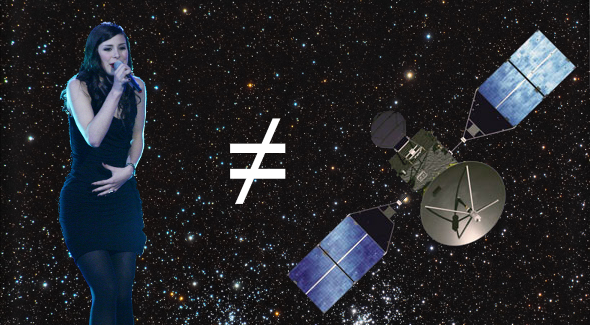 [What do you think, gentle readers? Do Mark’s equations check out? Can you escape Love in a non-Euclidean vacuum? Sound off in the comments!]