– Antoine Batiste, Treme, “Do You Know What It Means?”

Hopefully, this will be the last time I need to compare Treme to David Simon’s prior work, like The Wire and Generation Kill. With Treme already being picked up for a second season, a critical corpus will start to build around it. Then we can start comparing early seasons against late seasons (see, kids, TV criticism is easy! and fun!).

But standing here, with our foot on the door frame: one of the reasons many critics thought Treme was slower, less focused or not as strong as The Wire was because it lacked an overarching metaplot to drive it. The Wire had an obvious arc. Each season was about a major criminal case. The season began when the Baltimore police department was made aware of the crime; the season ended when they brought the criminals to prosecution. As the season reaches its end, the stakes ramp up and the tension mounts.

Of course, as we know by now, that’s hardly what The Wire was about. S1 of The Wire ends with Avon Barksdale being sentenced to six years while his nephew, a low-ranking dealer, gets twenty. S2 ends with Frank Sobotka, the target of an unwarranted investigation by a police major with a grudge, being brutally murdered by Balkan drug importers who get off without incident. And so forth. You think you’re getting a police procedural. You’re actually getting a gun-barrel look into how institutions grind people into dust.

We’re in a similar spot with Generation Kill. Generation Kill follows the 1st Recon during the early days of America’s invasion of Iraq in 2003. So the series starts with the men on the outskirts of the country and ends with them occupying Baghdad. Easy arc to follow. Except, by the time the series has ended, we realize the situation in Baghdad is still a clusterfuck (to use the accepted Marine Corps term) of epic proportions. There is no resolution, either happy or tragic. And our heroes don’t get the fate we feel they deserve.

This should tell us something. When we’re watching a Simon/Overmyer joint, the arc is never obvious. 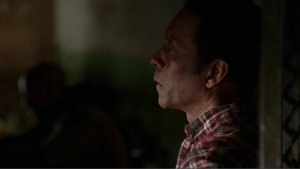 Treme did not even present us with an initial arc on which to hang its naturalistic character studies. The first season starts three months after Hurricane Katrina and the levees breaking. So where should the season end? With New Orleans getting “back to normal”? With our protagonists regaining the prosperity and satisfaction they had before the storm? Were it either of those, Treme would have to take place in Alternate Universe New Orleans.

In The Wire and Generation Kill, we could track the tone of the story by seeing how our favorite teams were doing. You were either with the Cops or the Dealers. You were one of the Privates or one of the Officers. Not everyone was on a team – consider Omar Little or Evan “Rolling Stone” Wright. But those characters were defined as “the ones without a team.” They were the exception. If you wanted to tell whether an episode was uplifting or depressing, just take note of how your favorite team was doing at the end.

In Treme, there are no obvious teams. The teams are easy to identify on The Wire and Generation Kill because they literally wear uniforms. They are teams which society recognizes. They are institutions in themselves. We can plug them into existing frameworks – Cops vs. Crooks, Enlisted vs. Officers – and let genre tropes do the heavy lifting. But for Treme we have to back up a step.

Treme is about Art vs. The World.

“A national treasure.”
“If the nation but knew.”

– Davis McAlary and Elvis Costello, Treme, “Do You Know What It Means?”

Every protagonist on Treme – with the exception of LaDonna Batiste-Williams and Toni Bernette – is an artist.

Some of them are obvious artists: Antoine Batiste, working his ‘bone; Sonny and Annie on the street; Creighton Burnette struggling with his novel. Some of them are artists to an audience of one: Big Chief Albert Lambreaux, who would mask and march if no one else in the world were watching. Some of them are posers more than artists, like Davis McAlary: better at appreciating art than creating it. And some of them are artists in a loose sense of the word, like Janette Desautel, master chef. But they all create art and they’re all passionate about it.

To talk about art, especially in the sense that Treme uses it, we need to define what art is. That’s a debate that could merit its own post. But there’s nothing wrong with courting controversy when you’re talking about a Simon/Overmyer production, so I’ll wade into the swamp. This is the definition I’ll be using: art is any creative endeavor for which the aesthetic value outweighs the utilitarian. The banging of trash cans as sanitation workers empty them is not art. Stomp, a Broadway dance show which uses banging trash cans as an accompaniment, is art. A meal meant to be bolted down before getting back to work is not art. A meal arranged to stimulate all five of the senses is art.

(We can debate this in the comments if you like. Suffice it for now: when I talk about “art” for the rest of this piece, the above is what I mean) 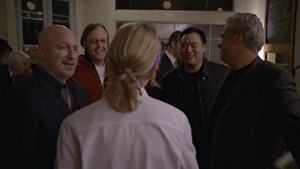 People make art for a variety of reasons. Antoine plays the trombone because he inherited it from his grandfather (as mentioned in Ep 8, “All On a Mardi Gras Day”). He loves performing hot gigs with real artists, like Kermit Ruffins or the Nevilles. He loves the audience. Chief Lambreaux, by contrast, masks for personal reasons. He’s woven the persona of being an Indian Chief so deep into his soul that it’s like a knotted cord. It’s the source of his strength and his stubbornness. To not be able to mask would break him. And while we never see the novels Creighton writes, we presume they’re dense literary works – not the crime fiction of Louisiana natives John Grisham or James Lee Burke. Creighton writes in search of truth, hoping to show us the present by giving us another lens to view it.

All of Treme‘s artists have the same effect: they bring joy and meaning to a weary world.

You wanna write off New Orleans? Cancel Carnival? Well, let me tell you something. Tuesday, February 28th, wherever the fuck you all are, will be just another gray, dreary sorry-ass fucked up Tuesday. But down here, it’ll be Mardi Gras. Fuck you, you fucking fucks!

– Creighton Burnette, Treme, “At The Foot of Canal Street”

The point of Treme is to show how delightful art can be, and how essential. In the case of the music it’s easy. If you don’t love the New Orleans jazz that they’re laying down every episode, no amount of argument will convince you. If you do love it, none should be necessary. The visuals, like Mardi Gras, should also be an easy sell. The more esoteric arts, like Janette Desautel’s cooking, will be tougher to make a case for in a television show. For her, we need the word of celebrity guests like Tom Colicchio and Eric Ripert. (I think a little more effort could have been made to show how great a chef she is; food photography is not a lost art. Anyway …)

So art is delightful. Art is essential. And everyone in Treme is an artist. The problem is that art doesn’t pay the bills.

5 Comments on “Overthinking Treme: I Feel Like Funkin’ It Up!”