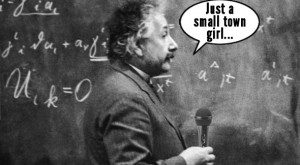 Based on the number of comments left on last week’s “Karaoke Quotient” article, in which I laid out a mathematical formula for determining the quality of a karaoke song, I can tell there’s a lot of people out there who are passionate about karaoke and the songs they choose to sing. Which is great, except for one thing: the whole point of the Karaoke Formula is that it’s an almost entirely dispassionate way to look at karaoke song choice. It ignores the highly choreographed routine you and your duet partner worked out for “Paradise By The Dashboard Light.” It doesn’t take into account the time you brought down the house with your virtuosic air guitar finale to “One” by Metallica.

But lest we forget, the benefit to this disciplined approach to the topic is that now have some way of answering the question,

“What is the greatest karaoke song of all time?”

After introducing the formula and subjecting it to some degree of public scrutiny, I was ready to feed it a bunch more data and use it to venture an answer to this question. I took a dozen more songs (many of which came up in the comments thread of the original post), crunched the numbers, and was somewhat surprised by the result.

Are you ready for this?

Here goes. For the limited sample set of songs that I ran through the Karaoke Formula, “Summer Nights” from the musical Grease achieved the highest score with a Karaoke Quotient (KQ) of 8.9.

Yikes. I can already hear legions of karaoke pros groaning and screaming in protest.

But before you down a beer and sing “I Hate Everything About You” at me, stick with me while I break down that KQ of 8.9 and see how it scored so high.

Now, about this whole “played-out” thing. I know a lot of you are thinking it, and honestly, you’re right. Years ago, when the OTI crew first started to do karaoke in New York, we probably sang “Summer Nights” a few times, but now, none of us in our right minds would choose it in each other’s company. We’ve done it enough. (And besides, songs from High School Musical are both far more novel and ironic than those from Grease.)

But there are legions of people for whom this song has not been done to death at karaoke. Which is why I made reference to a song in its “unspoiled, pre-overdone-at-karaoke-state.” The Karaoke Quotient doesn’t tell you how well your song will do, every time, with every audience, with every singer. It tells you how much potential a song has for karaoke greatness based on (mostly) objective measures. As such, I stand by both this formula and its determination that “Summer Nights” is a great karaoke song. It’s quite short, it’s not repetitive, it’s highly sing-able, and it’s just a lot fun to do.

Disagree? Then here’s your mission: use this formula and find a better karaoke song than “Summer Nights.” Fire up the Google spreadsheet, make a copy for yourself, feed it the numbers, and post the results in the comments. Be sure to include results both with and without the intangible factor (columns R and S, respectively). Also, if you do save a copy for your own data entry, be sure to make it public so I can copy the data back into the master spreadsheet.

In conclusion, I’m not quite ready to declare “Summer Nights” the greatest karaoke song of all time. At least not until I have a larger data set. And also, I’m not actually this obsessed with “ranking” or “grading” karaoke songs. I’m interested in enjoying myself and entertaining my friends at karaoke, and I’m fully aware that some great karaoke songs won’t score well with this formula.

I leave you with one such example:

11 Comments on “The Karaoke Quotient, Part 2: Is “Summer Nights” The Best Karaoke Song Of All Time?”